Stellar Reactions in a Galaxy Not So Far, Far Away 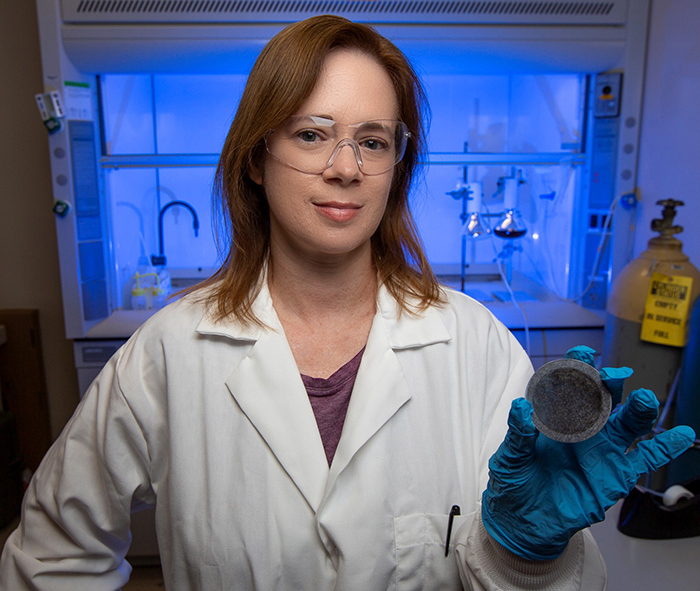 Few people over the course of history have had a hand in discovering an atomic element. Yet nuclear chemist Dawn Shaughnessy joined a team of scientists from Lawrence Livermore National Laboratory (LLNL) and Russia that discovered five elements from 1989 to 2010.

Now she leads the Nuclear and Radiochemistry Group of the Physics and Life Sciences directorate at Lawrence Livermore and uses the National Ignition Facility (NIF) to generate some of the most extreme conditions in our solar system for high energy density experimentation.

“NIF is the brightest neutron source in the world, and we use it to produce nuclear reactions that are relevant to the stockpile stewardship and nuclear forensics programs. The reactions cannot be done by using accelerators or other means,” says Shaughnessy, who is also currently serving a one-year appointment as scientific editor of the Laboratory’s Science & Technology Review. 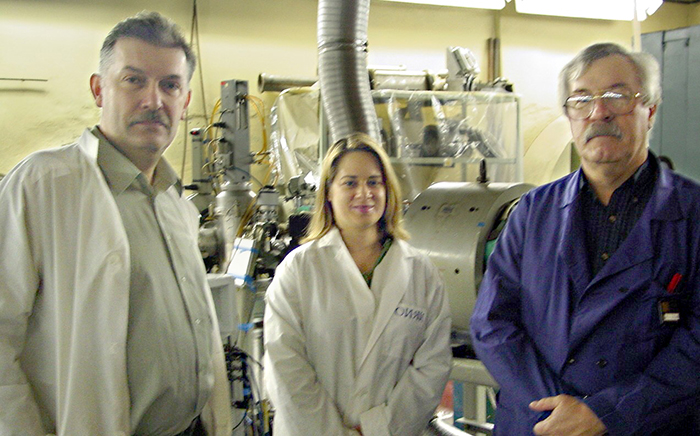 Russian scientist Alexander Yeremin (left), Dawn Shaughnessy, and former LLNL scientist John Wild stand in front of a particle separator from the U400 cyclotron at Russia’s Flerov Laboratory of Nuclear Reactions in 2003. The experiments by these researchers and their colleagues were used to investigate the nuclear properties of elements copernicium (atomic number 112) and flerovium (114). Courtesy of Dawn Shaughnessy

Her first experience with NIF came before it was even operational. She joined a working group to determine whether nuclear science could be performed at NIF, and, if so, what types of diagnostics would be needed for making the measurements.

“I was fascinated,” she says. “It was really cutting-edge stuff. You could make measurements in a plasma. No one else in the world was able to do that.”

She began investigating how to make experimental platforms for studying the nuclear reactions of material of interest, such as the elements nickel, yttrium, and zirconium (see “Providing Data for Nuclear Detectives”). But only over the last couple of years did her team develop a technique capable of doping target capsules with these elements. 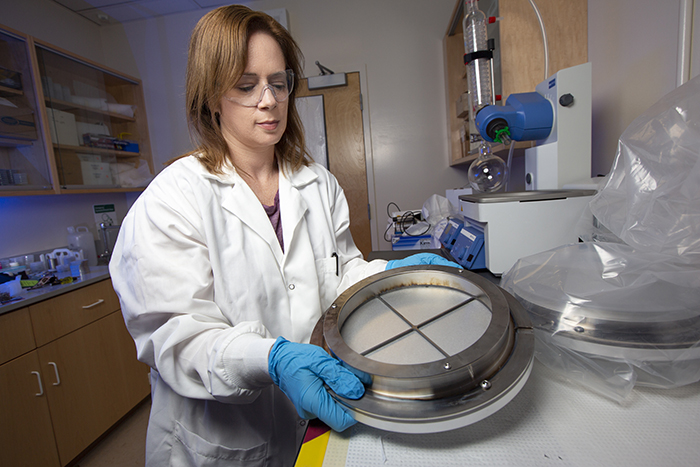 Serving as the NIF target is a 2-millimeter-diameter capsule lined on the inner surface with extremely small amounts of the material (about 1016 atoms) and filled with deuterium and tritium (DT) gas. The neutrons produced by the DT fusion during the shot bombard the material and cause nuclear reactions to occur. The fusion energy blows the products of the reaction outward, and the resulting solid debris is collected by specialized diagnostic instruments so that important radiochemical characteristics, such as rates of reactions, can be evaluated back inside a laboratory.

“Astrophysicists are also interested in these types of reactions because of NIF’s ability to duplicate the conditions at the interior of stars,” says Shaughnessy.

One such nuclear reaction under investigation occurs inside a class of stars that have masses on the order of the Sun. As represented below, it has boron absorbing a proton to form beryllium and an alpha particle. This nuclear reaction illustrates the type of interactions between atoms and particles that interest nuclear chemists. 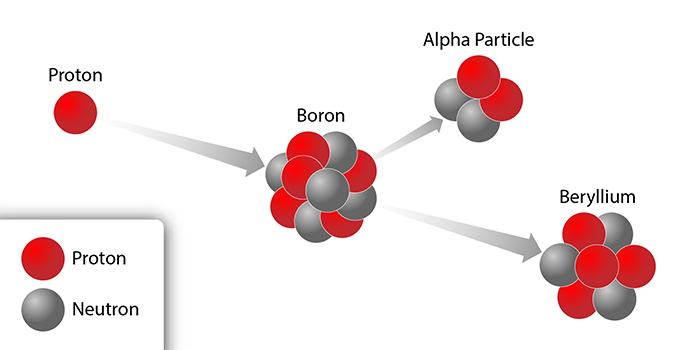 The nuclear reaction shows an interaction of atoms and particle that occurs inside of asymptotic giant branch stars when boron absorbs a proton to form beryllium and an alpha particle. Credit: Brian Chavez

As is true for so many of the projects at Lawrence Livermore, the search for basic science understanding can yield big returns for other programs. Through the Discovery Science program, about 8 percent of NIF’s shots each year are dedicated to these types of experiments.

“Everything we’ve done for Discovery Science ties exactly into the platforms that we are developing for the Stockpile Stewardship Program,” Shaughnessy says. “It has helped teach us how to dope capsules with materials, how to collect materials coming out of a shot, and how to conduct various analyses.” 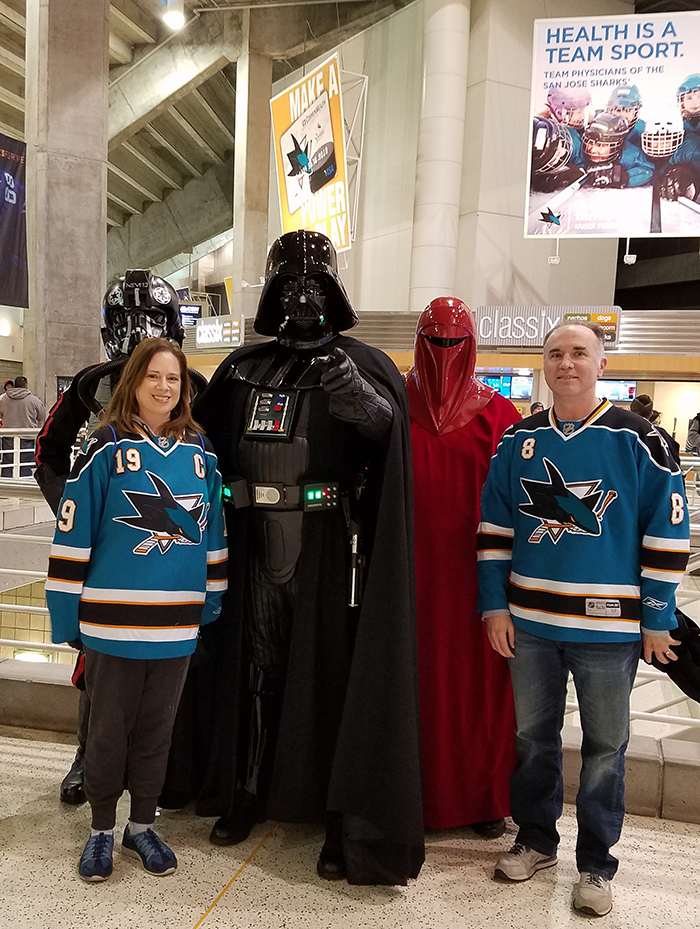 But it is not just in the stellar caldrons of stars in other galaxies where atomic concoctions are brewed. It happens right here in our solar system, without even having to escape Earth’s gravitational force. And from early on, this attracted Shaughnessy.

“Einsteinium is my favorite element,” she says. “It doesn’t get enough credit because its chemistry is relatively ordinary. But I think it is really cool.”

Her affinity toward einsteinium wells from her PhD research at the University of California, Berkeley, into the fission of this synthetic, radioactive element. But after graduation, she turned in the opposite direction at Lawrence Berkeley National Laboratory by studying environmental factors of plutonium, which she feels is one of the most interesting elements because it has many oxidation states and forms, and neptunium, plutonium’s next-door neighbor on the periodic table.

This radioactive background is what led Shaughnessy to join LLNL’s Stockpile Radiochemistry Group in 2002, which is the same year she began hunting for atoms that had never been observed before. The five elements that the team discovered were forged in a particle accelerator at Flerov Laboratory of Nuclear Reactions in Russia.

“The heavy element program at the Lab was very small,” says Shaughnessy, who became the team’s principle investigator in 2005. “It was a team effort by people who were really dedicated to the science. Most of us had a background in it from somewhere else.”

Shaughnessy is featured in this episode of LLNL's "Inside the Lab."


They filled out the bottom row of the periodic table by co-discovering the heavy elements flerovium (atomic number 114), moscovium (115), livermorium (116), tennessine (117), and oganesson (118) (see “Collaboration Expands the Periodic Table, One Element at a Time”). 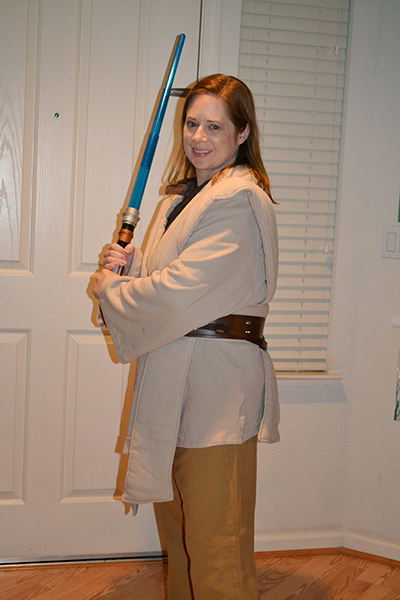 Seeing the first Star Wars movie in the theater as a child had a profound and long-lasting impact. Courtesy of Dawn Shaughnessy

If any of these short-lived, synthetic elements have familiar sounding names, like livermorium, it might be because many elements that appear in the latter part of the periodic table are given names to honor people and places connected to important achievements in science. Shaughnessy recalls that the name davincium was tossed around during this period of discovery, and she hopes it will be used one day in commemoration of the early days of scientific investigation.

It is hard not to envision Leonardo da Vinci, sketching his latest invention on a table while his Italian robe flowed around him. Shaughnessy, however, looked in a much more futuristic direction for her wardrobe inspiration: she owns a custom-made Jedi robe from a Jedi robe shop in England.

“I am an enormous fan of Star Wars,” she says—no surprise to anyone who has worked with her. “I’ve been a fan since it first came out in 1977, when I saw it in a theater and connected with it at a young age. Star Wars has always been a part of me. I still have my Star Wars figures. And now that we have new Star Wars movies again, I can get to share it with my daughter. I’ve probably seen the movies hundreds of times by this point.”

Even at NIF, the force is strong with Shaughnessy. The influence runs deep. When trying to name a newly developed solid debris collecting diagnostic—which happens to look rather spaceship-like—she came up with Vast Area Detector for Experimental Radiochemistry, or VADER. She quickly points out, though, that she is of course aligned with the light side of the force—or, as in this case, the “laser light side.” 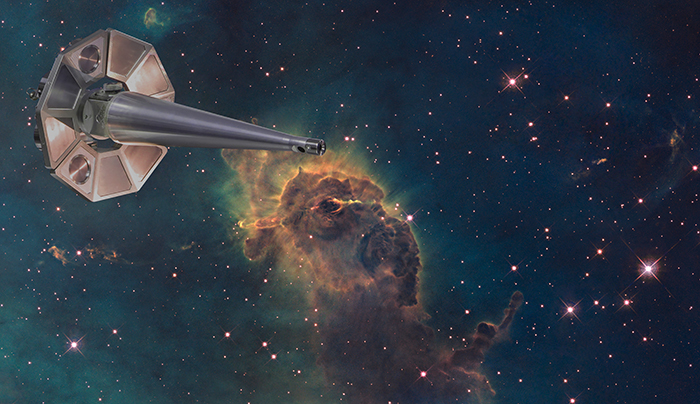 Shaped like spaceship from a sci-fi movie, with the stellar nursery Eagle Nebula as a backdrop, the name of Vast Area Detector for Experimental Radiochemistry (VADER) diagnostic may betray its origin. VADER is used to collect debris from star-like plasmas created at NIF. Credit: Brian Chavez (composition) and NASA (HST image)

Shaughnessy’s passion for this epic science fiction saga has helped propel her to transcend real-world boundaries, where science is fact and breakthroughs bring distant worlds much closer to home.