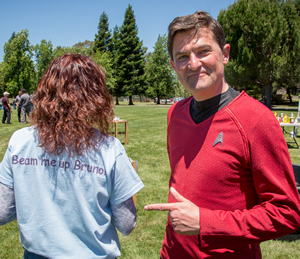 Do you remember when you started being interested in science?

My uncle was a radiochemistry professor, and I would go to the lab with him every Wednesday. He had one of the first calculators, the size of a briefcase. I could see it think with its lights flickering and parts moving back and forth. A simple square root would take seconds to calculate. My grandfather was a physics professor and had a huge library of physics books from the 18th and early 19th century I browsed through after school. He introduced me to lasers when I was a little boy in third grade.

I was fascinated by technology. I used to take apart everything I could get my hands on to figure out how it worked. At 12 years old, when other kids in my class were doing presentations on bugs, I taught three classes about how lasers and optics worked.

Tell us what led to your joining Lawrence Livermore Lab in 1992.

I received my Ph.D. in physical chemistry at the University of Leuven in Belgium—my hometown. I then did postgraduate work at UC Irvine, building a large laser system, x-ray equipment, and streak cameras. All of these skills were added to my “tool kit” that I brought along with me and were very useful when I arrived at Livermore years later.

I had always wanted to work with big lasers, but there isn’t a class you can take that will get you there. So I did research on my own, learning everything I could and whenever I researched high-power lasers, advances in diagnostics, target physics, or plasma interactions, Livermore was always there at the top.

When I was a visiting researcher at the Max Plank Institute in Germany, doing plasma x-ray emissions studies, I attended a seminar and heard Dr. John Holzrichter speak. He was a senior scientist at Lawrence Livermore National Lab at the time. He showed a full-scale picture of the Nova laser (NIF’s predecessor) that was a hundred times larger than the excimer lasers I was working on at the time. I wrote Holzrichter a letter saying I was interested in working at the Lab. They invited me to Paris for an interview. One train ride later, I was hired, moving from Germany to Livermore to work on the Nova upgrade.

As the NNSA (National Nuclear Security Administration) evaluated the needs for the Stockpile Stewardship program, it was determined that instead of a 20-beam system, we needed something more like 200 beams that were square and used multi-passing (a technique for bouncing the beams back and forth to gather additional energy). This raised a lot of questions and created a lot of questions, because for 30 years it had been done a different way. In 1992 I was in charge of bringing the Beamlet prototype laser to life to put these questions to rest.

You were the commissioning manager when the facility was being built. What was that like?

Something of this size and scope had never been built before. The NIF was a huge departure from how we’d been doing things. Even how we interacted with the laser system itself was changing. Before, you had optics that you could manually adjust and see with your eyes, but now everything would be encased in tightly stacked structures and suspended 18 feet in the air.

No matter what your previous experience was, it couldn’t prepare you for this. You had to continuously push yourself to think outside the box. It did not take long before we figured out we needed to follow a meticulous systems-engineering approach, looking at the system as a whole to determine what was important and how to put it together to meet the incredible requirements.

Many people doubted that NIF could ever be built.

There was so much to be done, and so many technical challenges that needed to be overcome. And this time instead of taking something apart to see how it worked, I was managing an incredible team that was building up something that was unique and immense—like the first pyramid. It was an incredible time. Without the motivation, dedication, and passion of every person involved, we’d never have made it from the massive empty laser bays in 2000 to its completion in March 2009.

We’ve all made sacrifices to get here, but it is worth it to stand here now in a structure that many said could never be built, as it performs on a day-to-day basis what many believed it couldn’t. We converted many of the naysayers into supporters of the new technology as the project proceeded. I’m proud of what we’ve accomplished.

You became the Operations Manager in 2009. Tell us what your job is like.

Currently, we’re transitioning NIF into a facility serving a wide community of experimenters. The NIF is so sophisticated now that every little detail has been engineered to be efficient, cost effective, and reliable while meeting incredible performance requirements, so the users of the facility don’t have to worry about this. They can confidently bring their (experimental) campaigns with unique requirements and demands to the system which we then adapt to as a team.

We have the people, the tools and equipment, the talent and tenacity to make this work, together with our partners across the (Department of Energy/NNSA) complex. NIF will attract the talent to fulfill its Stockpile Stewardship mission and lead the way in ground-breaking science.

You took a special break from your job to don the “red shirt” for the production of “Star Trek Into Darkness.”

I took a small hiatus from my day-to-day responsibilities to be an extra on the movie. For my job, I’m always on call and am reachable at all hours on my pager or cell phone. Right before shooting began, the people in my department held a ceremony where they officially took my pager and cell phone away, and they told me “this [the movie] is your job for the next two weeks.” For those two weeks, we experienced what life would be like in a spaceship in the year 2259.

The production arrived with 80 trucks full of equipment and 400 people, turning an empty field near the NIF into a mini-city that became their base of operations while they were here with us. They turned a laser facility into a spaceship in a matter of a few days. It was a beehive of activity from the moment they arrived until filming was over two weeks later. Then in an instant they were gone. The field was empty once again and it was hard to believe they’d even been here.

When I was a kid watching the Star Trek series on TV every Saturday night, who knew that one day they’d be filming Star Trek here at the NIF, and that I would end up in the background of a couple of shots that made it into the movie!

It was an amazing experience AND I got to keep the red shirt!

Was the process of making movies completely alien to you?

In the grand scheme of things, we are “science” and the movie-makers are “art.” Those worlds are closely coupled. Science can be beautiful, interesting and intriguing, just like art. There is a symmetry and creativity to both. Watching the crew work, I saw a similarity to the world here at NIF. Inside the facility, they ran miles of cable and staged equipment with efficiency and precision that mirrors how we operate. They are all driven and motivated—just like we are. They had the same closeness on the crew that I see with our teams here.

In between takes they would joke around and have fun, but when the camera was rolling it was dead seriousness. They can be extremely focused, solving problems by bringing some of the best minds in the business together to get the job done with a combination of specialists and broad-minded people that see the big picture with the vision to think big and be creative—just like we do here.

I love to drive to work each and every day being proud about the great role we play in this nation and world, and making me passionate about what I do. It’s still a dream come true.