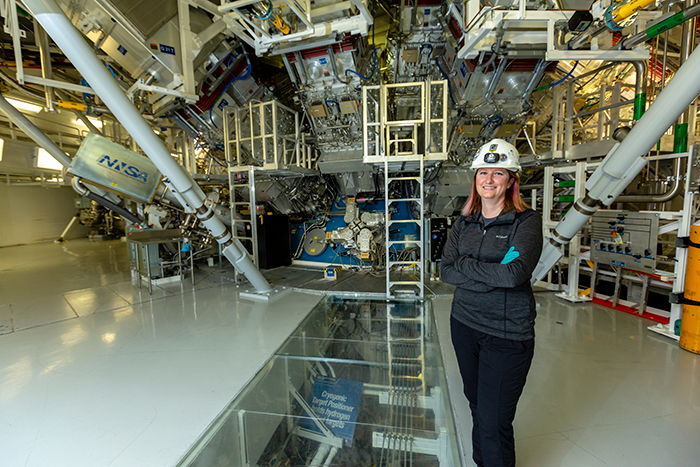 Customized procedures, ever-changing processes, rigor, and paperwork — what might seem tedious to some sparks joy for Brandi Lechleiter, classified operations assistant at the National Ignition Facility.

“This might sound odd, but I like busy work,” she says. “I like being organized and I really like process improvements. At NIF we want to learn from every experiment and find ways to improve the operation of this amazing scientific instrument.”

In addition to being the world’s largest, most energetic, and most precise laser system in the world, NIF is also the most flexible. More than 100 diagnostics available to gather shot data, pulse-shaping capability, varied targets, and various beam configurations, gives NIF the ability to tailor experiments to the scientists’ goals.

But this flexibility also means not everything on NIF can be automated, which results in a level of customization for most shots — the procedures, processes, and paperwork — that Lechleiter enjoys.

She charted an unusual career path to the NIF Control Room, but process improvement is a consistent thread. Her professional journey began in retail management and took her to Okinawa, Japan, with the Air Force and into the control room for commercial satellite monitoring before she finally landed at LLNL.

She started as a temporary holiday employee at Mervyn’s, a department store that went bankrupt in 2009, and moved on to Macy’s.

“I really enjoyed the logistics, planning, and in-store marketing of retail,” Lechleiter says of her time at Mervyn’s. “I was sent to a failing store as part of the management team where I turned around the shoe department by listening to the customers and ensuring we were promoting the right things. I was creative and given the opportunity to take on a very difficult task of rescuing my own department. I was very successful, even if the company eventually wasn’t.”

Retail is a notoriously tough industry with low pay, scarce benefits, and job instability. “No one asks to talk to a retail manager for a good reason,” she says. “Being a retail manager taught me how to stand up for myself, especially with intimidating people.”

Without knowing it, she was preparing herself for her next job — the Air Force. One day, Lechleiter attended two retirement parties for colleagues who had spent their entire careers in retail. “I decided I didn’t want that for myself,” she says. “After the second party, I went to lunch and walked to an Air Force recruitment office.”

The decision wasn’t entirely spur of the moment. Lechleiter’s brother was in the Air Force and thriving.

“He was really being challenged and learning a lot. And he had great benefits,” she says. “Plus, we grew up on our grandparents’ stories of World War II. My parents were successful in dynamic and difficult jobs. I wanted adventure and I wanted to be challenged. I was good at my job in retail, but I wasn’t getting much from my job. And I knew that going back to college wasn’t for me.” 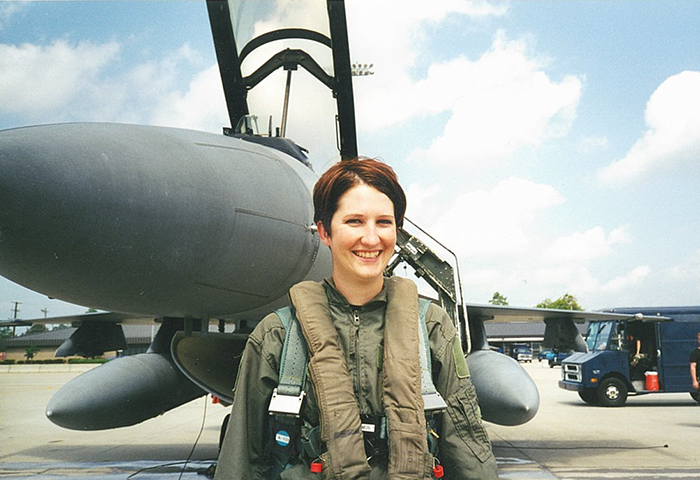 While stationed at Shaw Air Force Base in South Carolina in 2001, Lechleiter was awarded a flight in this F-16 fighter jet.

In the Air Force, she got exactly what she was seeking.

“Of the specialties offered to me, I chose satellite communications because it seemed like the most interesting and most difficult,” Lechleiter says. “At 26, I was much older than most recruits, but I think that was an advantage. I knew what I wanted and understood the point of all of the rules and regulations.”

After almost two years in the Southeast, she was stationed in Okinawa for four years. The job entailed living in the field, deploying around the world, and setting up and maintaining equipment in all kinds of conditions — all of which Lechleiter loved.

The Start and End of Every NIF Experiment

After her first tour, she left the Air Force and began working in the control room at Intelsat, a commercial satellite company. A year later, she was recruited by LLNL to join NIF’s Control Room as a target diagnostics operator.

“There isn’t much similarity between the jobs, except that they are both control rooms and needed an electronics background,” she says.

That wasn’t a problem, says her supervisor Tom Kohut, who leads Target Experimental Operations. “In this role, we’re looking for people who are technically competent with some experience in electronics or lasers, self-motivated, reliable, and able to troubleshoot and learn,” he says. “Brandi made herself indispensable.”

As a target diagnostics operator, her job was to ensure NIF’s vital diagnostics were set up properly to monitor experiments and record data. As Kohut puts it, “Diagnostics are the beginning and end of every NIF experiment, from the set-up to collecting data.”

NIF’s scientific value derives from the facility’s ability to recreate extreme pressures and temperatures only found in the sun, the center of distant planets, and during nuclear weapons experiments. But if a scientist can’t extract data from the experiment — a record of what happened through cameras, spectrometers, and a wide variety of other diagnostic equipment — then the experiment might as well take place on the sun.

The job, Lechleiter says, can be a lot of mundane work interspersed with exciting moments and troubleshooting of issues never seen before and may never be seen again. After nine years as an operator, she moved into a supervisory role, overseeing target diagnostic operators and duty engineers who run NIF’s control systems. She also took on the role of classified operations assistant.

“I enjoy working with my team,” she says. “I want them to be happy and productive and work under the best possible conditions.”

Kohut said Lechleiter’s attention to detail and ability to think ahead are strengths she brings to the job. “Almost half of our experiments have a classified aspect and it often involves other elements of LLNL,” he says. “There are a lot of moving parts and every shot is different.”

LLNL’s national security mission, and NIF’s role in that mission as a key element of the science-based Stockpile Stewardship Program, are also important to Lechleiter.

“The mission here is in line with the Air Force ideals. I like being part of something that makes a difference,” she says.