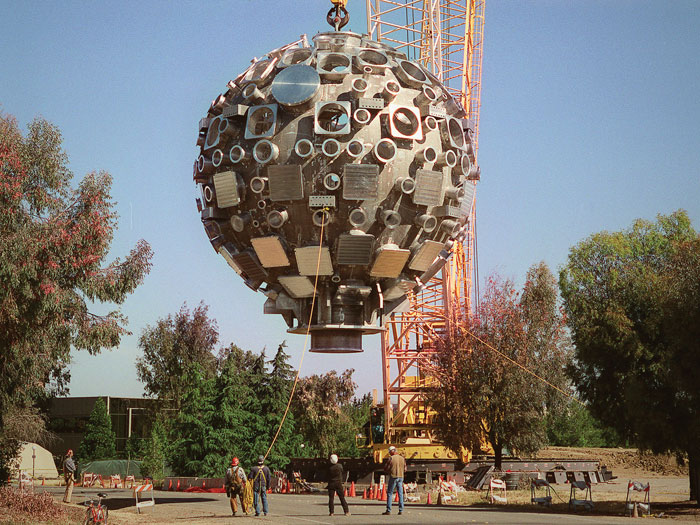 After careful preparation, a giant rotating crane lifted the NIF target chamber and gently placed it in the Target Bay, a breathtaking event that took only about 30 minutes.

Planning for NIF began in the early 1990s, and ground was broken on May 29, 1997. Energy Secretary Federico Peña said at the groundbreaking: “NIF will unleash the power of the heavens to make Earth a better place.”

To prepare the site for construction, more than 160,000 cubic meters of soil was removed. Construction was halted for several days in December 1997 when 16,000-year-old mammoth bones were discovered.

The 287,000-pound, 10-meter-diameter target chamber was hoisted by one of the world’s largest cranes and installed in the NIF target bay on June 17, 1999. Sixty-six trucks were required to transport the crane from the Nevada Test Site.

Construction of all the buildings and supporting utilities was completed in 2001. All 192 enclosures for the laser beams were completed in 2003, and the second of NIF’s two laser bays was commissioned in 2008.

California Gov. Arnold Schwartzenegger was among the many government officials participating in the NIF dedication ceremonies.

The challenges associated with building NIF were enormous, particularly in managing such a large, technically complex project, developing laser and optical technologies, and constructing and aligning the superclean environmental enclosures containing the laser beams. Many components were obtained thanks to significant technology advancements, while others were entirely new.

A typical construction project proceeds from conceptual through final design, construction, commissioning, and turnover to the owner. With NIF, however, construction and commissioning continued in parallel with the operation of increasing numbers of laser beams available for physics experiments.

With thousands in attendance, NIF was officially dedicated on May 29, 2009.