One of the great scientific challenges is understanding how elements form. This process, called nucleosynthesis, occurs at extreme stellar temperatures and pressures, making it difficult to simulate in the laboratory. The conditions produced by NIF experiments, however, are well matched to the conditions that exist in stars in several phases of their evolution. As a result, NIF is a powerful tool for exploring nuclear physics.

Elements heavier than iron are formed either slowly, during the life of a star, or rapidly, during a star’s last few seconds. NIF can more realistically replicate the hot, dense stellar plasma where both processes occur in nature than is possible in other laboratory experiments. 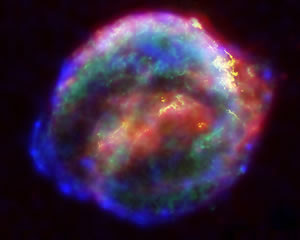 Livermore physicists are currently studying the slow nucleosynthesis process, or s-process. This reaction has a relatively large cross-section, or production probability, at stellar temperatures and densities, so it has been studied to high accuracy in laboratory experiments using low-energy accelerators.

Two important reactions occur in the s-process. In neutron capture, the mass of the nucleus increases by one unit, while the charge stays constant. In beta decay, the charge of the nucleus increases of decreases, and the mass remains unchanged. Accelerator experiments have measured the rates for neutron capture and beta decay, called cross sections, for most stable nuclei. Measuring cross sections of unstable short-lived nuclei has been impossible, however, in part because such studies would require unsafe quantities of radioactive material. Another complication is that nuclei in a stellar plasma often exist in excited states that modify capture probability.

With NIF, scientists can produce stellar conditions with much higher quantities of neutrons. In addition, the laser energy compresses the target, reducing its area by a factor of 1,000, boosting the density of nuclei, and increasing the probability of a neutron hitting a nucleus. Because of the additional neutrons and the extremely dense target material, an astonishing 2,800 years of stellar neutron capture occurs in every NIF shot. Even for short-lived nuclei, multiple reactions are possible in a single shot, potentially advancing scientific understanding of nucleosynthesis far more rapidly than accelerator-based experiments.

The gamma reaction history diagnostic, a tool developed for ignition experiments, is ideal for rapidly detecting and measuring important low-energy neutrons before the more energetic neutrons have a chance to muddy the signal. The diagnostic is one of more than 60 such instruments available for experimenters.