For 100-kilowatt (kW) diode arrays to become a common reality, two elements of the technology must be realized: high-performance, reliable diode bars, and heat sinks that can sustain superior thermal management and precision-diode bar mounting. Lawrence Livermore has developed just such a package for diode bars using silicon—the mainstay of the semiconductor industry.

LLNL uses photolithography and etching techniques to produce tens of thousands of 30-micron-wide channels in silicon substrates that carry cooling water. The water flowing through these microchannels significantly cools the laser-diode bars, which are mounted on the silicon less than 200 microns from the channels. Combining ten diode bars onto a single heat sink yields a ten-bar package (referred to as a “tile”), which constitutes the unit cell from which large, two-dimensional diode arrays can be built up through tiling. 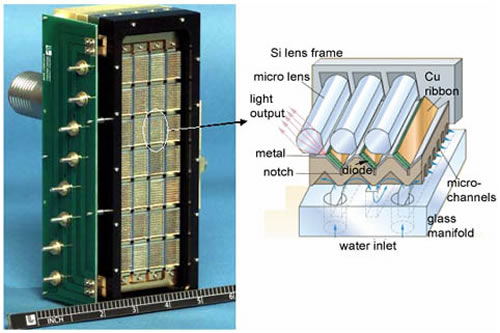 A 41-kW array made up of 28 SiMM packages. The sketch illustrates a portion of a SiMM laser-diode package.

The tiles used to make up these large arrays are called silicon monolithic microchannels (SiMMs). Considerations that drove the SiMM package design included ease of fabrication and the ability to construct large laser-diode arrays with output power capabilities of 10 to 100 kW. Of paramount importance in the design of the SiMM package was incorporation of the same aggressive heat removal capability that characterized LLNL’s original, rack-and-stack silicon microchannel-cooled package. This was accomplished by placing the microchannels into the silicon directly below the location of the attached laser-diode bars.

Like the rack-and-stack silicon microchannel cooler, the SiMM design maintains a very tight thermal circuit, with just 177 microns of silicon separating the heat-generating laser-diode bars and the microchannel fins that define the cooling channels.

The SiMM laser-diode array is a packaging technology for producing the smallest, most powerful and most inexpensive laser-diode pumps ever. Each package of ten laser-diode bars integrates the electrical, optical and hydraulic requirements necessary for high-average-power lasers. To date, arrays of up to 100 kW have been fabricated at LLNL and by SiMMtec, a commercial licensee of the technology.

With the relatively low cost of silicon, large arrays of these precision microchannels can be fabricated inexpensively using standard photolithography and etching techniques. Moreover, with silicon as the base material, individual diode bars can be precisely soldered to a package; each laser diode bar is connected to an LLNL-patented microlens, giving the SiMM package its unsurpassed optical brightness.