NIF & Photon Science is developing a high-average-power (100-kW-class), diode-pumped, solid-state heat-capacity laser (SSHCL) suitable for use in military weapons. A mobile, compact, and lightweight SSHCL laser system capable of being deployed on a variety of platforms is also under development. Potential military applications of such a system include the targeting and destruction of short-range rockets, guided missiles, artillery and mortar fire, unmanned aerial vehicles and improvised explosive devices, or IEDs.

In 2006, NIF&PS achieved a major accomplishment when the SSHCL produced 67 kilowatts of power—a 50% increase in the world-record-setting power level achieved the previous year. This class of power demonstrates that tabletop-sized solid-state lasers have come of age and can fulfill the performance requirements for their use in tactical weapon applications. 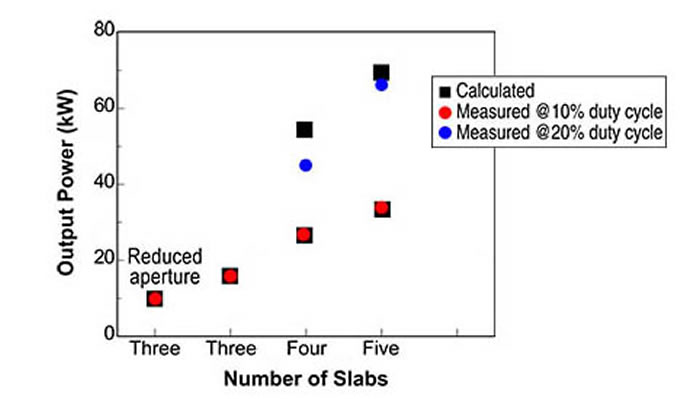 Additionally, improvements to the SSHCL’s laser optics, both in material selection and geometric architecture, have greatly enhanced temperature profile uniformity throughout the lasing cavity, yielding a beam quality two times the diffraction limit for five seconds of run time in NIF&PS’s unstable resonator. Beam quality control is integral to NIF&ampPS’s laser system development, and results like these portend the use of directed-energy weapons on the battlefield where they can effect “speed-of-light’ engagement in compact, mobile packages. 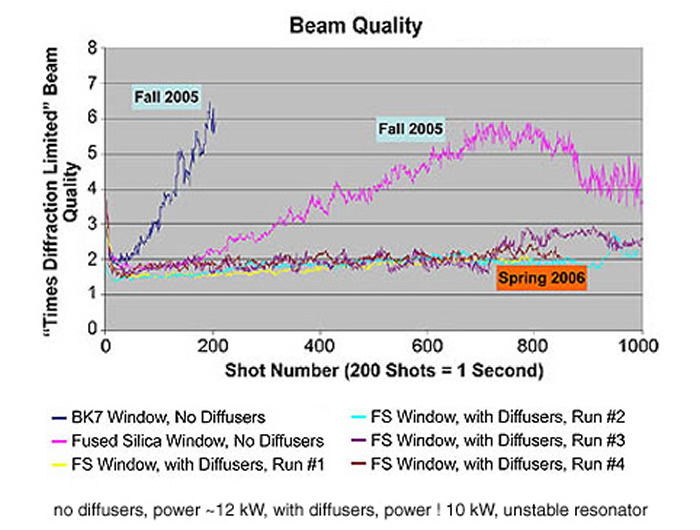 A beam quality of two times the diffraction limit—for five seconds—was achieved on the SSHCL testbed.

The extremely high fracture toughness of ceramic YAG:Nd3+, along with its facility for use in composing larger slabs, makes it the ideal material for laser gain media. 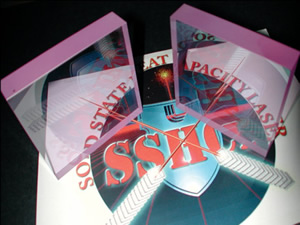 NIF&PS’s SSHCL test bed has afforded execution of extensive laser-material interaction experiments using a wide variety of materials such as steels, aluminums, titaniums and organic composites. Varying the spot size of the laser beam from a few millimeters to a 162-centimeter locus while sustaining an air flow rate of 100 meters per second at the point of laser-material interaction loosely simulates a target flying in the atmosphere. All tests were conducted at the nominal 25 kilowatts of average laser power.

These test results reveal the functioning of several mechanisms when the laser is used to destroy a target: thermal heating of the high explosive to ignition; increased material removal due to combustion of certain materials from the increased oxygen during air flight; and aerodynamic forces that literally rip the membrane from the annealed and weakened target, making it aerodynamically unstable. 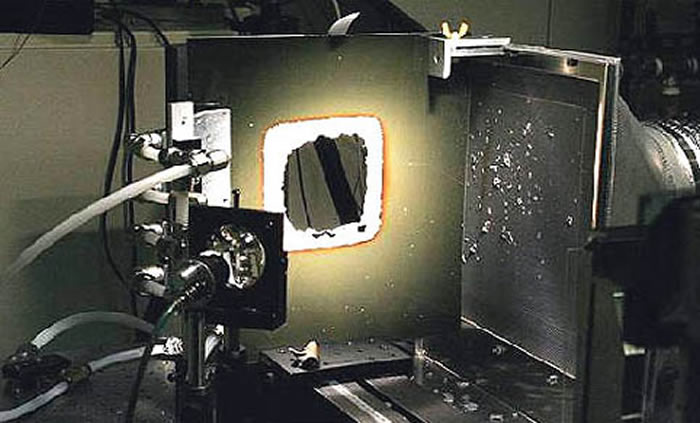 The development of a prototype platform using SSHCL technology suitable for testing at a proving ground or test range is the next step in the evolution of directed-energy weapons.

The transition from a laser-technology demonstration device in the laboratory to a fully-operational, directed-energy weapon capable of engaging live targets under battlefield conditions is a key NIF&PS objective.

A 100-kilowatt, mobile SSHCL is proposed, with LLNL providing the laser technology and an industry partner managing system integration.

LLNL’s work on the SSHCL has set the stage for a new generation of ceramic lasers and high-power laser architectures which will be capable of running continuously at high efficiency and with exceptional beam quality.