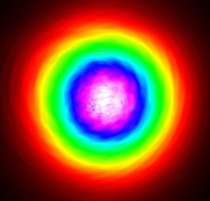 The first demonstration of a resonance-transition alkali laser using Rb vapor occurred at LLNL in the winter of 2002.

Since the advent of lasers more than four decades ago, solid-state and gas lasers have followed largely divergent development paths. Gas lasers are based primarily on direct electrical discharge for pumping (energizing), while solid-state lasers are pumped by flashlamps and semiconductor diode laser arrays.

The alkali-vapor laser's intrinsically high efficiency and its compatibility with today's commercially available diode arrays enable fast-track development paths to tactical systems, with mass-to-power ratios that far exceed what is possible with today's other laser systems.


Building on alkali-vapor laser research done by Z. Konefal, PS&A's Directed Energy Systems and Technology (DEST) program element recently developed a new class of laser that combines features of both gas and solid-state lasers, based on diode excitation of atomic alkali vapors. The defining features of the diode-pumped alkali laser (DPAL) are its ability to be incoherently pumped and its compatibility with diode arrays having several-nanometer-wide spectral emissions. These characteristics distinguish DPALs from previous demonstrations of alkali-based lasers that used narrow-band, coherent pumping to demonstrate lasing.

DEST is the world leader in the development of this new class of laser; the first demonstration took place at Lawrence Livermore National Laboratory in 2002, and it has been followed by many other demonstrations and developments.