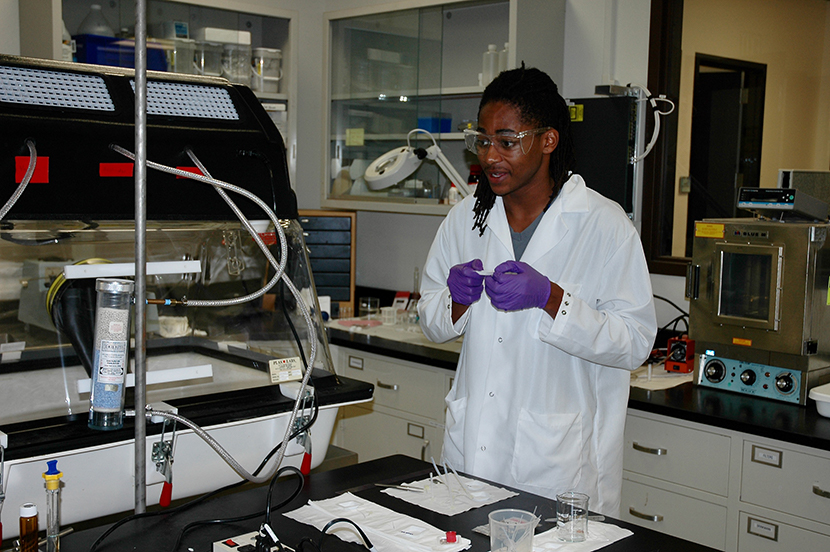 Quahhar Fletcher, a Morehouse College graduate and Lab intern for two summers with the NIF&PS Directorate, spoke about his Lab experiences at a recent virtual “LLNL Day.” Fletcher is shown during his first summer at the Lab in 2018. Credit: Ed Lindsey

A recent virtual “LLNL Day” reached out to students from Historically Black Colleges and Universities (HBCUs) to share the Lab’s culture and encourage interest in internships and job opportunities.

The event featured two panel discussions, including one among student interns from five HBCUs; meetings with Lab staff from specific disciplines; and virtual tours of the National Ignition Facility.

“The virtual event provided LLNL with an opportunity to reach a broad HBCU audience to understand about the opportunities at the laboratory from current and former students, and current staff members,” said Tony Baylis, director of LLNL’s Office of Strategic Diversity and Inclusion Programs.

LLNL Day is part of the mission of the Lab and the Department of Energy (DOE) to increase the number of underrepresented population groups pursuing careers in STEM (science, technology, engineering, and math) and to encourage qualified participants to pursue job opportunities. In the United States, African Americans, Hispanics or Chicanos/Latinos, and Native Americans are historically underrepresented in science and engineering, according to the U.S. Census and other federal measuring tools. 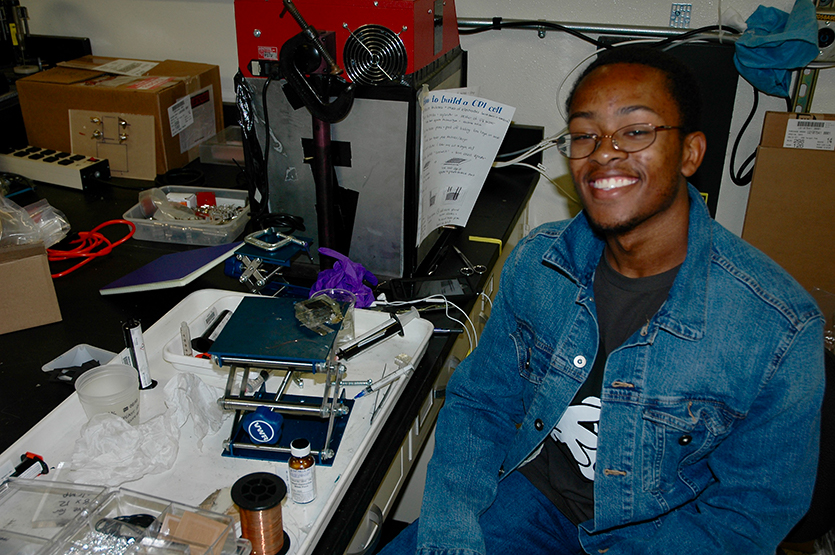 Eric Carter, who attended Morehouse College and was a NIF&PS intern, was among the former Lab interns who spoke at the LLNL Day event. Carter is shown during his first summer at the Lab in 2018. Credit: Ed Lindsey

Underrepresented minorities currently make up nearly 19 percent, or 11,987, of the 63,736-employee workforce of the national laboratories, including LLNL, Sandia, and Los Alamos, according to recent diversity and inclusion data reported by the laboratories.

“The true breakdown of numbers gives even greater validity to why we are pouring our energy into recruiting at HBCUs,” said Vanessa Peters, a NIF&PS researcher and alumna of Norfolk State who was a key LLNL Day organizer. “While there has been an increase in hiring staff from underserved communities, it’s not all underserved groups.”

Both Lab staff and the students voiced high praise for LLNL Day, held on Nov. 4, and plans are already in the works for another event in 2021.

“We were able to speak with students from five different institutions and speak to them about what it is like to intern and work at LLNL,” Peters said. “With the networking sessions, we were able to provide a more focused, intimate conversations.”

Quahhar Fletcher, who attended Morehouse College, said the experiences he gained as a LLNL intern have made him “a better person,” and he would “definitely” consider a job at the Lab. Now a graduate student in mechanical engineering at Auburn University, he worked on target fabrication using electrodeposition for two summers as a NIF&PS intern. 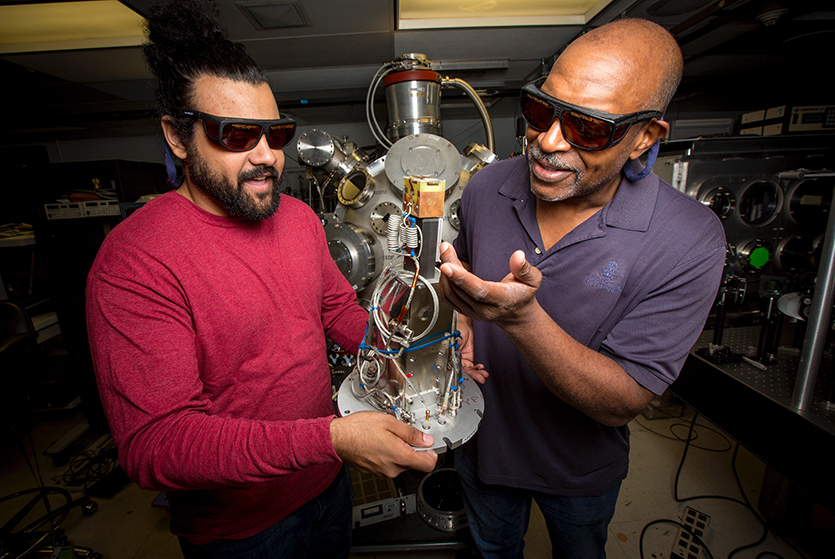 Jerry Clark, a Florida A&M graduate who is now an in-residence intern at LLNL, and mentor Ronnie Shephard prepare for tests on the x-ray streak camera at the Jupiter Laser Facility. Credit: Jason Laurea

Clark is an intern for the Physical and Life Sciences (PLS) Directorate and the High Energy Density Science (HEDS) Center, working on experimental investigation of HED plasmas under the direction of senior LLNL researcher Ronnie Shepherd. 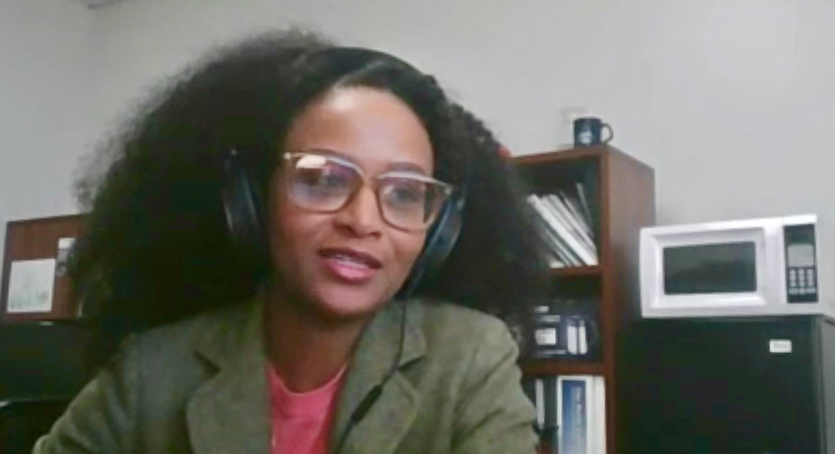 Rochelle Miller, who interned at PLS and the HEDS Center, is currently a senior managing developmental chemist with Henkel Aerospace. The Spelman College graduate spoke of the inherent value of internships.

“I’m not doing the exact same thing I did at Livermore Lab,” she said, “but all of those practical laboratory experiences—all of the laboratory research and technologies that are being developed, are great whether or not you go into your field of study.”

LLNL Day grew out of concerns Peters and other Lab staff heard from students from Norfolk State and other HBCUs, said laser physicist Zhi Liao, NIF&PS workplace development leader and a key contributor to LLNL Day.

“Promoting LLNL as a ‘world class, cutting edge’ research institution was intimidating to the students, especially if they don’t see or can’t identify with someone like them working at LLNL” he said. “The Lab’s prestige in science and technology actually discouraged them from applying for internships because they thought they did not belong here.” 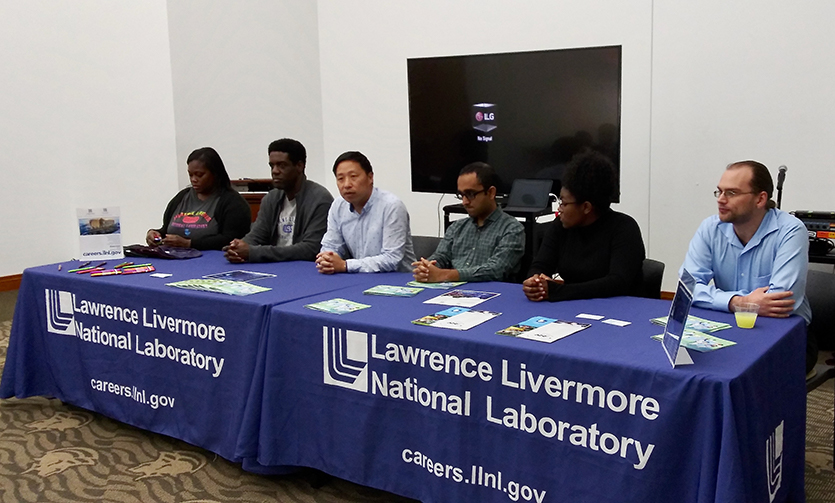 Peters, Liao, Baylis, and Ibo Matthews, Laser Materials Science Group leader, applied for a DOE grant calling for a “peer recruiting” approach. The grant was awarded in 2019, and LLNL held an outreach event at Norfolk State that November.

NIF&PS had begun collaborating with NSU in 2016 for research and to increase awareness of careers at national laboratories. More than a dozen NSU students have served as NIF&PS interns. The Lab has hired two NSU postdoctoral students, including Peters, who was recently converted to a staff researcher.