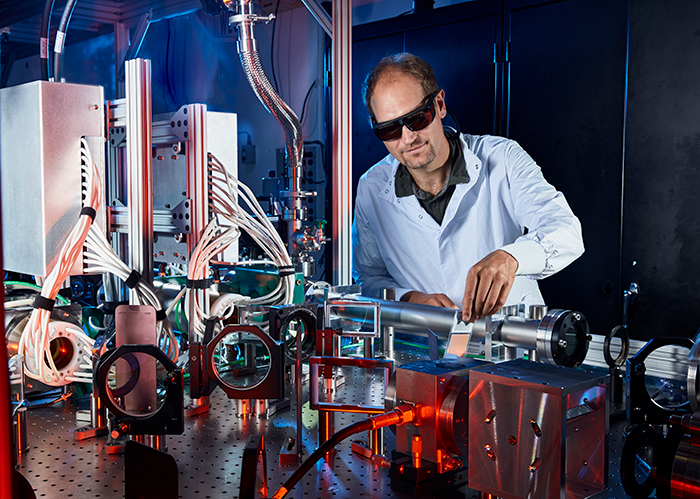 Andrew Longman aligns the COMET laser at LLNL’s Jupiter Laser Facility. Upcoming experiments using the COMET laser in early 2023 aim to create some of the strongest static magnetic fields ever generated by a laser.

Electromagnetic vortices are naturally occurring throughout the universe and have recently been observed in association with black holes. Over the last decade, scientists have sought methods to investigate how extremely strong electromagnetic vortices interact with matter, specifically plasma, in a laboratory setting.

Plasma, known as the fourth state of matter, makes up nearly all observable matter in the universe and consists of freely moving ions and free electrons. The use of high-intensity lasers to generate these vortices have shown great promise and have the potential to unlock new physics when such beams interact with plasma.

Andrew Longman, a High Energy Density Science (HEDS) Center postdoctoral fellow for LLNL, proposes that spiral phase mirrors, when incorporated into a laser system, will enable scientists to “twist” the laser light and generate an optical vortex. An optical vortex is best described as a beam with a helical wavefront, like a whirlpool but spinning at the speed of light.

While pursuing his Ph.D. in electrical and computer engineering at the University of Alberta, Longman gave a presentation at the University of Rochester on the use of spiral mirrors in high-power laser systems. His work grabbed the attention of several scientists from Lawrence Livermore, including David Strozzi, who encouraged Longman to consider coming to the Laboratory.

Longman’s unique research proposal on how to use these mirrors to “twist” the laser light and create extreme magnetic fields—something which has, until now, been primarily theoretical—landed him a two-year fellowship with LLNL’s HEDS Center.

Optical vortices, as illustrated here, are best described as a beam with a helical wavefront. In Andrew Longman’s research, optical vortices are used to rotate plasma to extremely high angular speeds, enabling studies of new physical phenomena. To generate these vortices at ultra-high intensities, Longman uses an off-axis spiral phase mirror—a mirror that has a wavelength-deep (less than one-thousandth of a millimeter) spiral imprinted on its surface.

“We launched the HEDS Center postdoctoral fellowship in 2019 with the support of Weapons and Complex Integration’s Weapons Physics and Design Program,” said NIF staff scientist Félicie Albert, the HEDS Center’s deputy director and fellowship coordinator. “Andrew exemplifies the quality of research and talent this fellowship is about. The program gives our fellows the opportunity to pursue their own original research, use the Lab’s resources and interact with other scientists; while also benefiting our programs and strengthening the pipeline in HEDS, one of our core competencies.”

As a fellow, Longman has had the opportunity to expand on his graduate research and improve the fabrication process of his spiral mirror design using the Laboratory’s unique optic fabrication capabilities with magnetorheological finishing (MRF) technology—a technique for polishing ultraprecise corrective topographical structures onto optical surfaces.

Mirror, Mirror on the Wall

The spiral mirror technology used to generate an optical vortex is relatively simple. “To fabricate the specialized off-axis spiral phase mirrors, we used MRF techniques to imprint a wavelength-deep (less than one-thousandth of a millimeter) spiral on the surface of the mirror,” Longman explained. “When the laser beam reflects off of the mirror, it picks up a ‘twist,’ and can transfer this angular momentum to any kind of target—solid, gas, or plasma.”

This allows researchers to drive helical plasma waves and currents capable of generating very strong magnetic fields, as well as trapping, guiding, and accelerating particles that could enhance laser‒plasma interactions.

When researching methods for how to generate vortices at high power, Longman had to take into consideration the constraints associated with making direct modifications to a given laser facility’s components. Installing specialized mirrors offered the most practical solution.

Overall, Longman’s mirror design has turned out to be extremely successful, generating the highest-intensity optical vortices ever produced. The design has been implemented in roughly 10 laser facilities around the world. “It is a great feeling to see something that I created utilized so widely,” he said.

After years of research, Longman’s journey at LLNL has come full circle. His first introduction to LLNL and its facilities was in 2015 and 2016 as a graduate student when he assisted LLNL scientists Art Pak and Tony Link in a series of experiments at the Jupiter Laser Facility (JLF).

Now, as a fellow, Longman will have the opportunity to lead an upcoming experiment at JLF, where he will use the finished spiral mirrors to “add a twist” to the JLF’s COMET laser platform—in an attempt to generate and measure extreme magnetic fields.

Reflecting on his experience at LLNL, Longman said it was tough to start at a new laboratory in the middle of a pandemic.

“For the first year of my fellowship,” he said, “I didn’t have the opportunity to routinely interact with the other scientists because of COVID restrictions, but now that I am on site more frequently, I get to be more involved and have quality conversations with other scientists about their research. There is so much talent under one roof and the people here are so welcoming.”

“Andrew came to the Lab with a remarkable skill set,” said Longman’s mentor Pierre Michel, “ranging from hands-on experimental expertise to advanced theory and simulation techniques. He independently drives his own research project while collaborating with large teams, and he makes full use of the resources that the Lab offers, from advanced manufacturing to large-scale computing. This makes him a perfect fit for the HEDS fellowship and for the Lab in general.”