These compound parabolic concentrator (CPC) targets have already become instrumental for three experimental campaigns on the ARC that enabled results that were not otherwise possible at NIF. After successful initial experiments, a team of LLNL scientists conducted further research to better understand the underlying physics of how CPCs generate turbulent laser fields that improve the coupling efficiency and acceleration of relativistic (near speed-of-light) electrons.

The results published recently in Physical Review E found a combination of confined low-density plasma and reflected light from the cone walls contributed to randomized “intensity islands” that enhanced acceleration. The results give scientists information needed to design more efficient CPCs for ARC shots and optimized platforms for Discovery Science and programmatic experiments.

“We’re interested in getting the largest number of electrons at the highest temperature possible,” said plasma physicist Jackson Williams, the paper’s lead author. “The understanding of how that light couples with the plasma and accelerating electrons inside of the cone is really the novel understanding that we presented.” 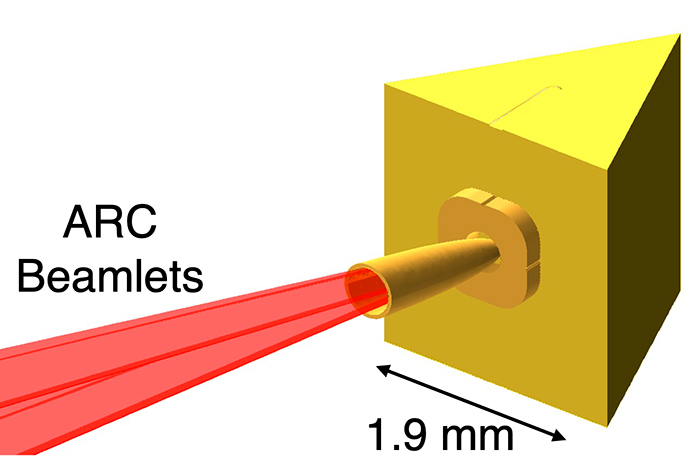 The petawatt-class ARC is called a “laser within a laser” because the system operates within NIF, the world’s largest, most energetic laser. CPCs are designed to better concentrate the energy produced by four ARC beamlets that are converted from two of NIF’s 192 beamlines before they enter the Target Chamber during experiments, which take place in the span of picoseconds (trillionths of a second).

The CPCs loosely resemble a tall, narrow flower vase that gradually tapers inward from a wider open end, although at a scale that could only hold a millimeter-tall floral arrangement (see “Focusing Targets Give Over 10x Performance Boost to NIF’s ARC”).

Scientists suspected that light would not perfectly focus to the cone tip due to the presence of plasma, reducing the theoretical intensification, but also thought that this effect might be compensated for by increased coupling efficiency within the plasma.

“We knew that the CPC targets increased performance but didn’t know how,” said physicist Hui Chen. “There were many, many photons squeezed into this tiny cone and they have so much energy. What was unknown then was how that plasma would change that picture. This paper shows that yes, plasma does make things more complicated.”

The CPCs have produced higher energy electrons and secondary particles than equivalent flat targets, giving ARC new capabilities that open the doors to campaigns such as one headed by Chen exploring electron-positron pair production to study astrophysical events like stellar mergers and gamma ray bursts.

“We thought initially that the cone was going to take light from the edges of the beam, because the NIF ARC focal spot is very big, and redirect it toward the center to make it more intense,” Link said. “But that didn’t seem to be the thing that drove most of the improvement.”

Using particle-in-cell simulations that compared conditions with and without the cone walls, the researchers said they found the increase in intensity caused by focusing to have “only a marginal effect” on energetic electron yield. “This was surprising, because the original design of the cone was based on the idea that it would act as a focusing optic,” said physicist Mark Sherlock.

“To really figure out what physics mattered, we had to do a simulation where we kept that same plasma distribution but removed the ability for the main pulse to interact with the cone walls to pick out these additional differences,” Link said. 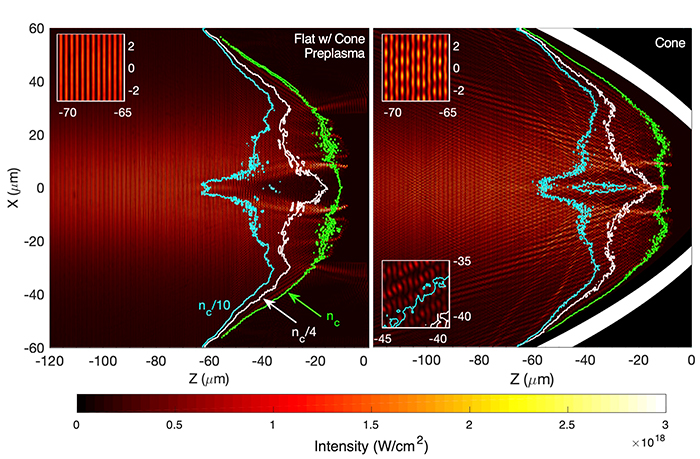 These diagrams show field intensity plots for (left) a flat target with pre-plasma, shown with the cone wall removed, and (right) with the cone contours shown as a solid white line. The inset on the left diagram shows the uniform plane waves of light. In the right diagram, the lower inset shows a closeup of random “islands of intensity” that boost the energy of electrons.

The more significant effect came from the increased amount of plasma that starts to develop as soon as pre-pulse light hits the edges of the cone. The cone’s walls confine that collection of charged ions and electrons, which then interact with the laser light.

“Near the cone wall and throughout the cone tip where near-critical plasma density exists, the large angle between incident and reflected light produces localized islands of high intensity with a turbulent wave-number spectrum,” the researchers said. “Electrons that traverse such islands can dephase from the laser and will experience a short period of acceleration or deceleration. This process repeats itself as electrons cross a large volume of these intensity islands.”

Adding the walls in the simulation showed “an extra boost from the reflection of light” that created “really chaotic fields,” Williams said.

Sherlock added, “We had been independently working on the idea that fragmentation of the laser into many small islands was the real driver of efficient acceleration in these types of experiments, so it was exciting to see this demonstrated so clearly with A-B comparisons.”

“Instead of plane waves, you get little islands of intensity,” he said. “Just being in a highly chaotic laser field allows for more and more acceleration. This makes for a much more efficient electron acceleration field.”

These findings are helping researchers experiment with different cone geometries and materials to find maximum efficiencies. Scientists have also begun experimenting with two side-by-side CPCs attached to the same target—using laser pulses delivered within a few nanoseconds of each other—to increase high-energy x-ray yield. CPCs have also been used to increase the maximum proton energy that will be used to radiograph magnetic fields or create exotic states of matter.

“We have confidence that we’re capturing all of the physics and that we’re able to identify all the physics mechanisms that leads to this increase,” Williams said.