The Internship that Launched a Machine-Learning Target Revolution 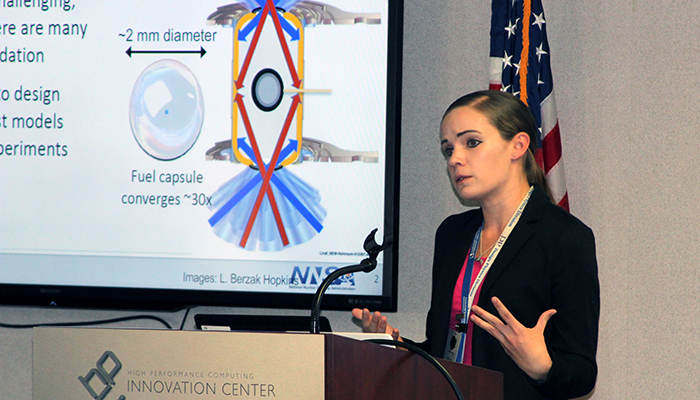 Kelli Humbird presents a technical talk at the Women in Data Science 2020 regional event at LLNL. Credit: Holly Auten (Click to expand. Use keyboard arrow keys to view all photos.)

Kelli Humbird came to Lawrence Livermore National Laboratory for a summer internship in 2017 and never left.

At that time LLNL’s Luc Peterson, taking advantage of the open science period on Los Alamos National Laboratory’s Trinity Supercomputer, was creating a huge dataset and wanted to use machine learning to analyze the data (see “Machine Learning Points to New Target Designs”). He asked Humbird, a graduate-student summer intern with the Lab’s Weapons and Complex Integration (WCI) Directorate, to see what she could learn by applying machine learning to the data.

“It was a happy accident — I was at the right place at the right time and given the right dataset,” she says. “None of us were expecting a summer project to turn into something this big.”

According to Peterson, the team had been trying to build a good model of the Trinity data without success for months. “Kelli showed up and figured it out it two weeks,” he says. “It’s not often that students end up being the teachers, but since the day she arrived as an intern Kelli has been instrumental in bringing these new data science techniques to not only ICF, but also the broader laboratory mission.”

To fill in the gaps, Humbird used 80 percent of the Trinity simulations to train a machine-learning model, which was then tested on the remaining 20 percent of the data to evaluate its predictive capability. The model—a random forest decision tree method—accurately predicted energy yield with a less than 10 percent margin of error. With a trained machine-learning model in hand that closely mimicked the expensive physics code, Humbird began predicting implosion performance between the simulated data points to search for a robust implosion.

A sort of topographical map of target designs began to emerge as the model filled in additional data points. The detailed topographical map indicated that areas representing egg- or football-shaped targets, known as ovoids, were plateaus of stability. Even if NIF could not create an implosion at the absolute center of the plateau, being slightly off-center would still produce a high energy yield. With a better idea of where to look, Peterson and Humbird ran a more expensive, full-scale physics simulation on the ovoid target, and their predictions were confirmed.

“The answer was surprising,” says Humbird. “It clashed with physics intuition and led us to discover a new type of physics that occurs in ICF implosions. This is a great example of what machine learning can do because it has no biases. It directed us to a design space we would not have typically considered.”

After puzzling over the contradictions, Peterson realized he was seeing zonal flows in the imploding egg-shaped target. Similar to a spiraling hurricane sucking up neighboring clouds, zonal flows can absorb disruptions caused by target support tents or capsule roughness and incorporate them into a larger, more stable vortex. This incorporation steadies the implosion and allows for greater energy output, the researchers concluded.

Along with Peterson and her thesis advisor Ryan McClarren, Humbird continued the work, which soon evolved into a Laboratory Directed Research and Development project. She became a Livermore Graduate Scholar while completing her PhD at Texas A&M and wrote her thesis on machine learning and ICF design, which LLNL design physicist Brian Spears described as “a seminal work on neural networks.”

“The algorithms that Kelli developed during her thesis as a Livermore Graduate Scholar have been an enabling technology for a variety of disciplines from ICF to stockpile analysis to nuclear physics and medicine and are helping scientists around the world leverage neural networks for their research. Most recently, we have been applying these techniques to model COVID-19, helping senior decision makers plan for and respond to the pandemic,” says Peterson.

A Love of Physics and Horses

“As a kid, I loved animals,” she says. “I went through a phase of being obsessed with one animal after another. Once I got to horses, I never moved on. I started riding when I was 6 and owned my first horse at the age of 16. I wanted to ensure I could always afford to have a horse in my life.” 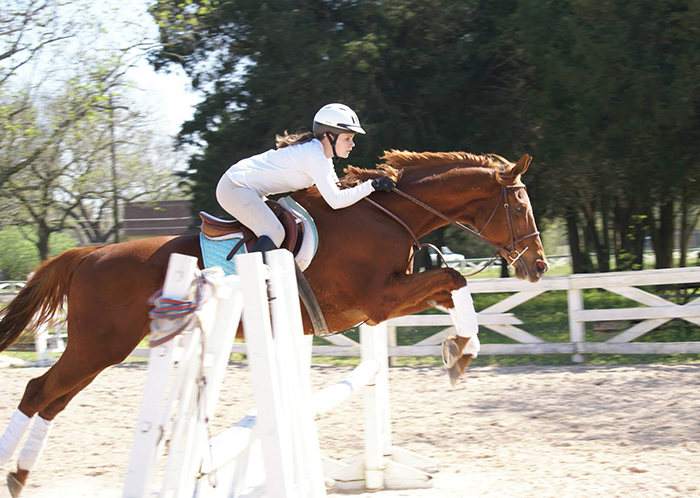 A love of horses has been a constant in Humbird’s life. Courtesy of Kelli Humbird

Once in college, she fell in love with physics after a good introductory course. This led to a double major in nuclear engineering and physics. As a graduate student, Humbird became interested in machine learning, which made her the right person for Peterson to turn to for the Trinity machine-learning project.

“I really didn’t know much about inertial confinement fusion, but it’s the perfect mix for me,” she says.

While completing her PhD, she moved to Livermore, which has proven to be the right place. The move has allowed her career to flourish at the Lab, and it’s a horse-friendly town. “Even though the cost of living is different, the cost to own a horse is about the same,” says Humbird. “It’s worked out nicely and there are so many beautiful places to ride.”

Humbird finished her PhD and became a Lab employee in 2019. She is applying machine learning tools to traditional WCI models. She’s also working with the Global Security Directorate’s Nuclear Forensics Group’s emergency response team to build machine-learning tools for their work. And, Humbird is part of a team working on modeling for COVID-19 projects. Both projects were recently recognized with WCI Gold Awards

“The way things have turned out for me, I feel really lucky,” she says. “Especially to be a part of such cool science.”