Video: The Beamline to Ignition


What happens when 192 of the world’s highest-energy lasers converge on a target the size of a peppercorn filled with hydrogen atoms? Answer: the same thing that happens inside the Sun and the stars: fusion! NIF’s laser beams can create nuclear fusion in the laboratory by generating the same kinds of temperatures and pressures that exist in the cores of stars and giant planets and inside nuclear weapons (see Anatomy of a NIF Shot). 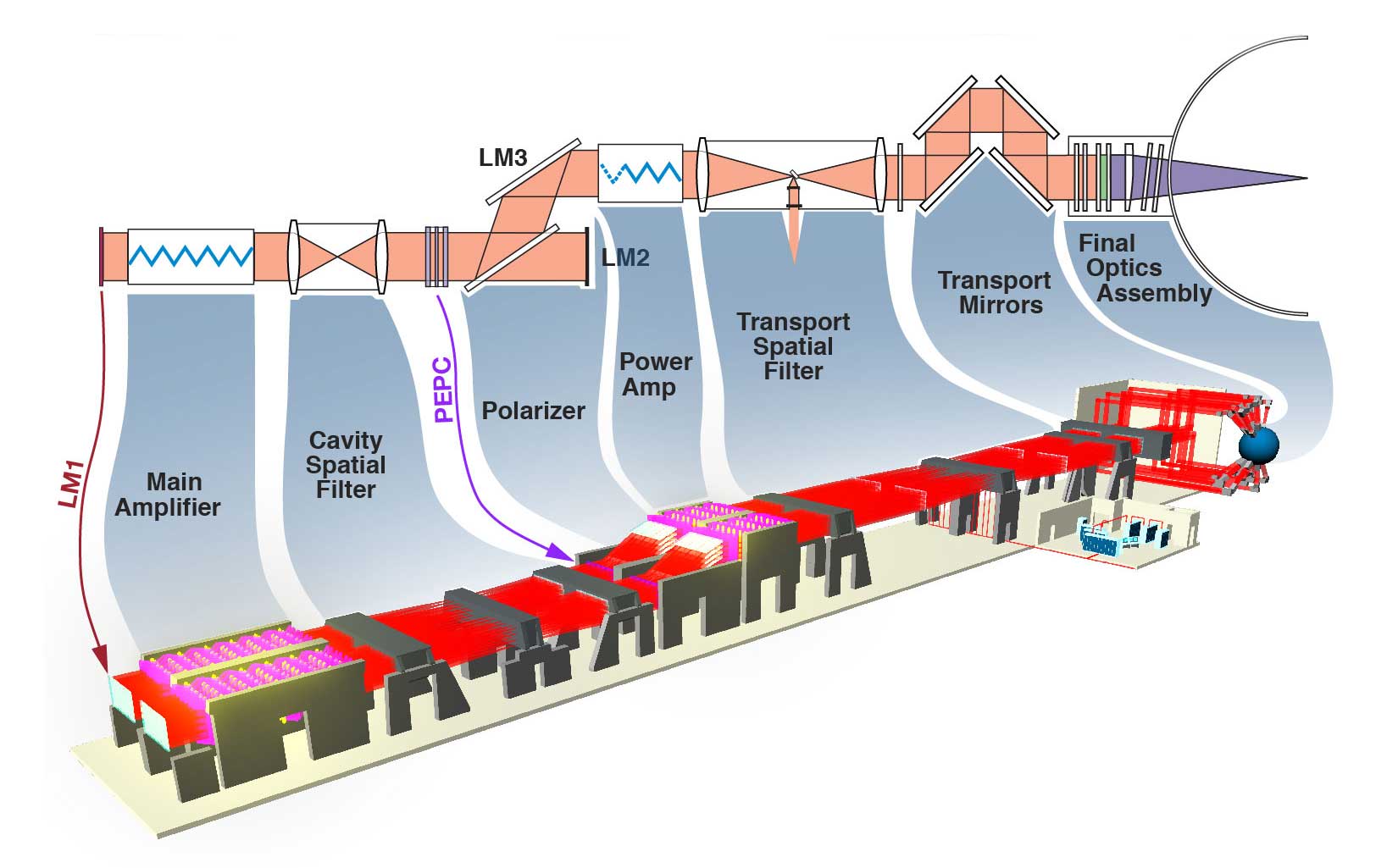 At the outset of a NIF experiment, a weak laser pulse—about 1 billionth of a joule—is created, split, and carried on optical fibers to 48 preamplifiers that increase the pulse’s energy by a factor of 10 billion, to a few joules. The 48 beams are then split into four beams each for injection into the 192 main laser amplifier beamlines.

Guided by laser mirrors (LMs 1, 2, and 3), each beam zooms through two large glass amplifiers, first through the power amplifier and then into the main amplifier. In the main amplifier, a special optical switch called a plasma electrode Pockels cell (PEPC) traps the light, forcing it to travel back and forth four times, while special deformable mirrors, spatial filters, and other devices ensure the beams are high quality, uniform, and smooth (see The Seven Wonders of NIF).

From the main amplifier, the beam makes a final pass through the power amplifier. By now, the beams’ total energy has grown from 1 billionth of a joule to 4 million joules—all in a few millionths of a second.

The 192 beams proceed to two 10-story switchyards on either side of the Target Chamber where they are split into quads of 2×2 arrays by a series of transport mirrors (see Beam Transport). Just before entering the Target Chamber, each quad passes through a final optics assembly, where the laser pulses are converted from 4 million joules infrared to 2 million joules ultraviolet energy, and focused onto the target. NIF’s 192 laser beams travel about 1,500 meters from their birth to their destination at the center of the spherical Target Chamber. Yet the journey from start to finish takes only about 5 microseconds.

An array of diagnostic instruments attached to the Target Chamber measure what happens when the target capsule implodes and the hydrogen atoms inside the capsule fuse in a controlled thermonuclear fusion reaction, releasing enormous amounts of energy. Those diagnostics provide an invaluable stream of fusion-related data that informs researchers at the Lab and around the world.

A Legacy of Lasers and Laser Fusion Pioneers