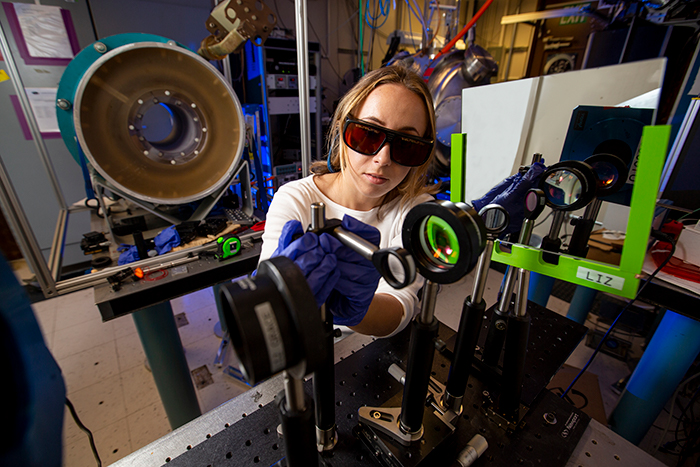 In high school, Liz Grace thought physics was boring and instead considered studying psychology or music.

But then a college professor inspired Grace to see the wonders of physics. Today, as a NIF & Photon Science Summer Scholar, she’s helping to design and build a diagnostic instrument that could become a revolutionary measurement tool for NIF’s Advanced Radiographic Capability (ARC) laser system.

The Georgia Tech physics PhD candidate is adapting STRIPED FISH, an ultrashort laser pulse measuring technology pioneered by researchers at her university, at the Lab’s Jupiter Laser Facility (JLF). NIF scientists eventually hope to use STRIPED FISH — an acronym for Spatially and Temporally Resolved Intensity and Phase Evaluation Device: Full Information from a Single Hologram — to both directly measure ARC pulses and to develop plasma mirror technology for ARC.

“It measures everything that you would want to know about a pulse,” Grace said. “The possibilities are just endless. We keep thinking of more and more things to use it for. It’s really thrilling to see all of the stuff that can be done.”

Grace, 26, worked at JLF’s COMET laser last year, partly helping on a team of Summer Scholars working on new x-ray light sources to apply in high energy density (HED) science experiments. But she was also deploying STRIPED FISH, a device based on holography that can accurately measure what an ultrashort pulse laser shot looks like in both time and space.

“It’s the only diagnostic capable of obtaining all of this information in a single shot,” she said. 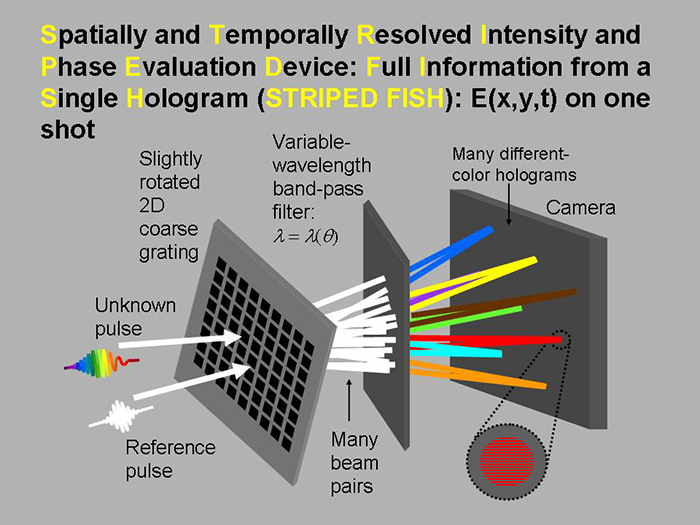 NIF Physicist Tammy Ma didn’t meet Grace last year but heard about her and her work. When Ma learned Grace was returning to Livermore, she suggested the NIF scholar program and a chance to work on one of Ma’s physics projects.

NIF scientists want to be able to use a plasma mirror as a disposable version of the facility’s conventional optics, which are used to shape, split, delay, or redirect lasers. Initially, the plasma mirror is solid, but becomes a plasma when it is ionized.

Plasma mirrors could be used inside the Target Chamber, where there isn’t enough space for a conventional optical mirror, to change a beam’s characteristics just before it hits the target. Plasma mirrors have been used in mid-scale short pulse laser facilities, but haven’t been tried at NIF, the world’s largest and most energetic laser.

Scientists propose using plasma mirrors with ARC to refocus the beams to obtain higher intensity levels but need to know more information about the processes involved.

“We often can measure what’s going on with the mirror as we’re blowing it up, but it’s harder to measure what the laser looks like after it bounces off,” Ma said.

That’s where STRIPED FISH comes in.

“You want to map the critical surface of the plasma mirror as it undergoes these laser plasma interactions,” Grace said. “STRIPED FISH is really the only game in town if you want to see all that stuff at once.”

Ma said Grace is building a replica of last year’s STRIPED FISH diagnostic to deploy on JLF’s Titan and COMET lasers. On COMET, it will measure the evolution of the spatio-temporal field of plasma mirrors under irradiation in the multi-picosecond regime. For Titan, the diagnostic will provide precise short-pulse measurements.

“Ideally, we would like to put one on ARC, but we have to demonstrate that it works,” Ma said. “The short term work is really about getting a good, clean measurement. Then she’ll be doing an experiment in the fall where we’ll use the instrument to measure what the laser looks like coming off a plasma mirror.”

Her thesis advisor is Georgia Tech physics Professor Rick Trebino, who is renowned for developing STRIPED FISH and other ultrashort-pulse measurement techniques with colorful wild-life acronyms, including FROG, GRENOUILLE, and SEA TADPOLE. He called Grace “one of the most motivated and brilliant grad students” he’s ever encountered. 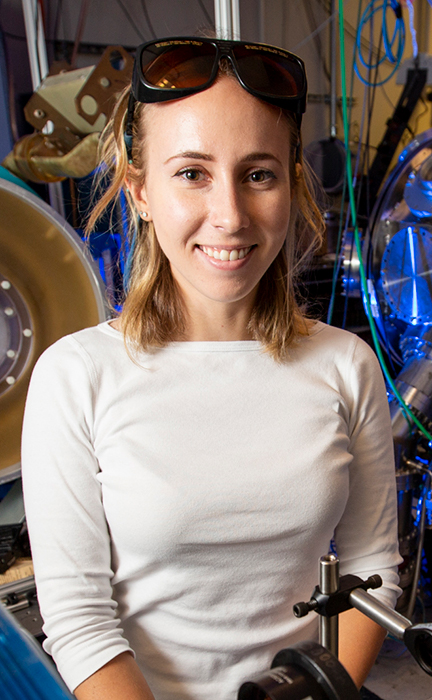 “She’s working on one of my favorite projects, the culmination of almost three decades of my group’s work on measuring ultrashort laser pulses ever more completely,” said Trebino. “It’ll be very exciting to see its measurements and their role in the experiments requiring them. LLNL has been the intended ‘customer’ for this device from the beginning, so this collaboration is a dream-come-true for us (and, we hope, for LLNL, too).”

He also noted that Grace “isn’t one to sit back and let opportunities come to her. She has been going out and making things happen for the past couple of years and has had a number of her own ideas for this work at a much earlier age than most grad students do.”

Ma said Grace is “incredibly enthusiastic” about her work. “She’s curious and very detail oriented, which you obviously have to be to accurately measure something so fast and so small,” said Ma. “She’s very good in the lab.”

That’s all high praise for Grace, who came close to going in different directions with her career. The Washington, D.C. native took AP Physics in high school, but thought it was “boring.”

And, she added, “When I was 15, I just didn’t think it was realistic for me to actually go into physics for some reason. I thought it was more practical to go into psychology.”

However, while still in high school, she took summer classes at Cornell University and met a professor who was passionate about astrophysics. He talked to her about topics such as star formation, dark energy, and black holes, then encouraged her to do a paper on relativity.

“I changed my mind (about physics) really quickly after I saw how cool it was,” she said. “That class was absolutely the turning point for me, and I never really wavered. From that point on, I knew I wanted to study physics.”

Grace had her heart set on going to Reed College, a liberal arts college in Portland, Oregon, but also applied to music conservatories because she has loved playing the piano since she was four years old.

She majored in physics at Reed and wrote her senior thesis on astrophysics. She then went to graduate school at Georgia Tech, where her physicist grandfather was once the dean of graduate studies.

She thought about studying astrophysics, but then learned about STRIPED FISH and began working with Trebino.

That led Grace to the Lab. Last year, postdoctoral researcher Jaebum Park, who was working on a different experiment at COMET, became interested in STRIPED FISH and realized the instrument could apply to measurements of plasma mirrors.

“It’s a compact, accurate diagnostic that can be applied to any ultrafast laser system.  In order to push forward short-pulse laser physics, we absolutely need to understand better exactly what the laser delivery looks like at the target,” Ma said. “That’s why the instrument will be revolutionary for the field.”

After Park mentioned that Grace was interested in returning to the Lab this year, Ma offered her the chance to apply STRIPED FISH to the plasma mirror research, which also gave Grace the chance to obtain some good physics data.

Park is now working with Grace to prepare for a plasma mirror experiment that is expected to take place in the next few months.

Grace is thrilled to be back at the Lab this summer.

“After coming here and seeing what they’re capable of on the NIF, I’ve been very impressed by the facilities and the scale of science here,” she said. “It has been incredible to see, and it’s something you can’t get at a university. This is where I’d like to work.”