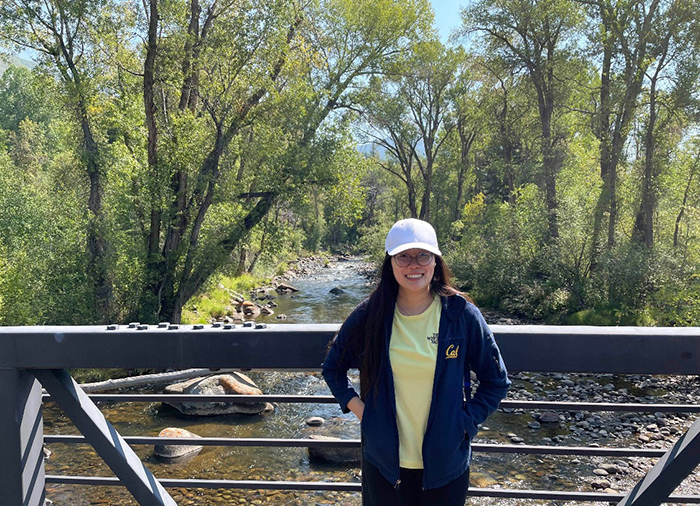 Su-Ann Chong, a NIF&PS Summer Scholar intern, poses at the Roaring Fork River in Aspen, Colorado. Chong received her bachelor in physics from UC Berkeley and her master’s degree in computer engineering from University of Tennessee, Knoxville. She is pursuing a Ph.D. in nuclear engineering at UT Knoxville. Credit: Michael Aboody

“First, it was meticulously organized, which I later discovered she applies to all her work,” Schlossberg said. She included “hyperlinks to her own online code repository and a personalized ‘portfolio’ highlighting her successful projects.” Finally, he said, “the content of her work experience was an excellent match for the neutron detection and modeling projects” for the summer.

Even before the program began, Chong’s passion, commitment, and work ethic impressed Schlossberg, who served as her mentor. “When someone starts work at the Lab—be it in person or virtually—there’s a giant stack of things to do—forms to fill out, accounts to request, training courses, etc.,” he said. “Su-Ann began working on these even before she officially started at the Lab.”

Chong, who grew up in Penang Island, Malaysia, attended UC Berkeley as a physics major with a nuclear engineering minor. She received her master’s degree in computer engineering with a focus on data analysis and machine learning at the University of Tennessee, Knoxville, and is now pursuing a Ph.D. in nuclear engineering at UT Knoxville.

For her doctoral work, she spent most of her time at the Oak Ridge National Laboratory in Oak Ridge, Tennessee, where she recently finished developing a high-rate pixelated neutron detector for one of the neutron-scattering instruments at the Spallation Neutron Source.

“The instrument scientists were really excited about the new capability that my detector can offer,” she said.

Schlossberg said Chong’s selection of a summer project was a surprise because it wasn’t focused on her doctoral work on neutron detectors. “She voiced a newfound passion for data science and machine learning,” he said.

Chong’s project was titled, “A Data-Driven Approach Towards NIF Neutron Time-of-Flight Diagnostics Using Machine Learning and Bayesian Inference,” and is aimed at presenting a different take on nToF diagnostics. Neutron time-of-flight diagnostics are an essential tool to diagnose the implosion dynamics of inertial confinement fusion experiments at NIF, the world’s largest and most energetic laser. 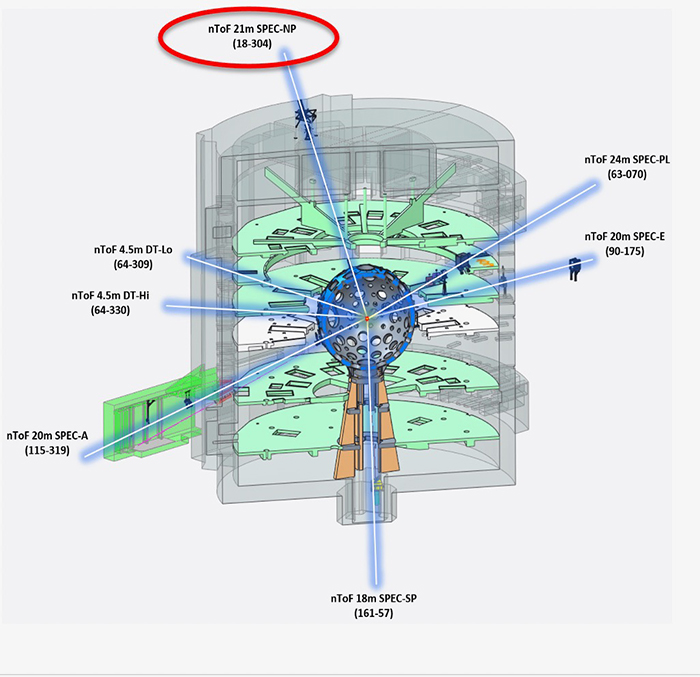 For Chong’s project, instead of using the physics-based forward-fitting algorithm typically used by the nToF team, data-driven approaches such as Bayesian inference and machine learning were developed for more accurate uncertainty estimation by inferring the probability distribution of fusion quantities instead of point estimates.

“Having the distributions of the fusion quantities not only allows us to better understand the uncertainties, but also provides insight into the correlation between different fusion metrics,” she said. “This approach can complement the current diagnostics by providing new information that is not yet captured in physics models and simulations.”

The Markov chain Monte Carlo (MCMC) method was used to derive the probability distribution of fusion metrics. MCMC typically takes many iterations to converge, so to speed up the process, an algorithm called Deep Jointly Informed Neural Networks (DJINN), which was developed by LLNL scientists led by Humbird, was trained.

A dataset was needed to train the neural network. The nToF diagnostic group physics model was used to generate this dataset and ensure it was consistent with physical models and experimental constraints.

“We demonstrated a high level of agreement between the generated dataset and experimental measurements when given the same input parameters,” Chong said. “This shows the neural network is really good at capturing the various features in the neutron spectra. We were able to achieve a speedup of 1,000 when using the neural network, which significantly speeds up the computation cost of the MCMC routine.

“In the end, the result produced by MCMC showed a close agreement with the experimental data and we were able to draw correlations between different fusion quantities, which has never been demonstrated before. This allows us to gain new insights about the experiments that current physics models have yet to capture.”

Chong praised Schlossberg, Gaffney, Peterson, and Humbird for providing guidance and support throughout her internship. “I genuinely think that having great mentors is crucial in getting a great internship experience,” she said. 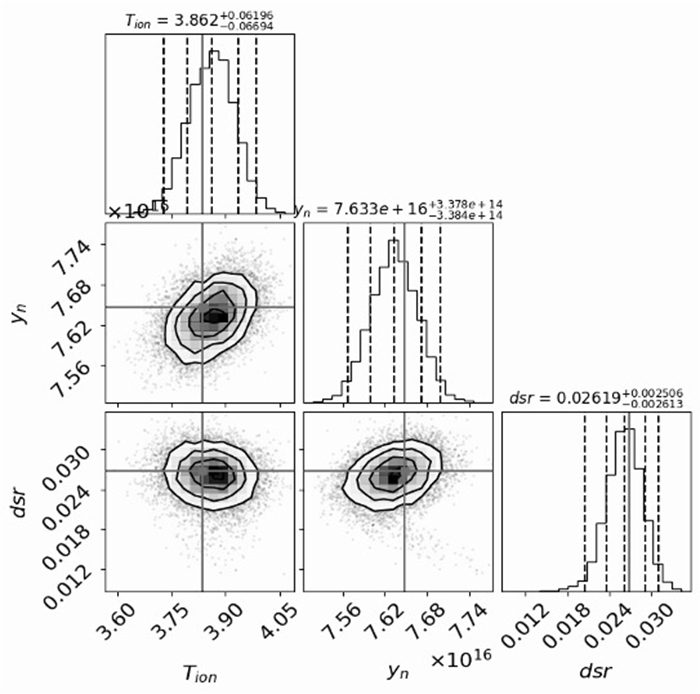 Chong said her “overall experience with the NIF&PS Summer Scholar Program was very rewarding and fulfilling as this internship experience allowed me to explore fields outside of my Ph.D. work, in particular.”

Since the Summer Scholar Program was held virtually because of the pandemic, Chong initially was worried about the lack of involvement with people and the Lab.

“However, I felt very engaged in my project, group, and the Lab despite working from home,” she said. “My weekly schedule would consist of a good number of meetings, workshops, seminars, and happy hours. I felt inspired by the people I worked with, the diverse projects done in the Lab, and the welcoming environment and culture at the Lab. I was able to get to know other interns through intern-run groups.”

Schlossberg echoed Chong’s statement about how she embraced the internship.

“Su-Ann absolutely did not let the fact her internship was remote diminish her determination and curiosity,” he said. “She and I had check-ins several times a week, to which she always brought an itemized list of topics she wanted help with or new results to show.

“Throughout the entire project, she exhibited tremendous work ethic. Being physically located in the Eastern time zone, she was often hard at work before people in California typically log on,” Schlossberg continued. “However, the same was also true at the end of the day, when Su-Ann would email, or we would have a discussion lasting into the evening Pacific time. She showed flexibility, resolve, and prioritization for getting her work done successfully.

“Not only is Su-Ann intelligent, she’s also enjoyable to work with,” he added. “I know the entire NIF neutron time-of-flight team enjoyed having her join our group for the summer.”

Chong’s internship was partially funded by the Lab’s Diversity, Equity, and Inclusion (DEI) fund, which is provided by the office of the Deputy Director for Science and Technology and distributed through the Lab’s DEI committee to proactively encourage diversity, equity, and inclusion in the workforce. DEI committee members include Zhi Liao at NIF&PS; Beth McCormick at Engineering; Susan Carroll at Physical and Life Sciences; and Benji Grover at Weapons and Complex Integration.