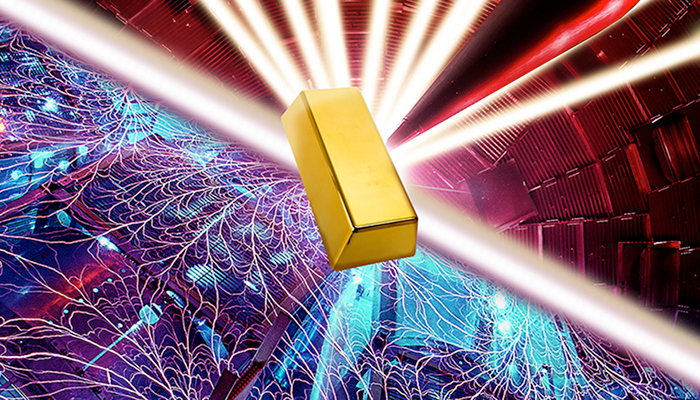 Using the world’s most energetic laser and the world’s most powerful pulsed-power facility, an international research team has derived new pressure scales for gold and platinum at 1 terapascal. Credit: James Wickboldt

To test the Standard Model of particle physics, scientists often collide particles using gigantic underground rings. In a similar fashion, high-pressure physicists compress materials to ever- greater pressures to further test the quantum theory of condensed matter and challenge predictions made using the most powerful computers.

Pressures exceeding 1 million atmospheres are capable of dramatically deforming atomic electronic clouds and altering how atoms are packed together. This leads to new chemical bonding and has revealed extraordinary behaviors such as helium rain, the transformation of sodium into a transparent metal, the emergence of superionic water ice, and the transformation of hydrogen into a metallic fluid.

With new techniques constantly advancing the frontier of high-pressure physics, terapascal (TPa) pressures that were once inaccessible can now be achieved in the laboratory using static or dynamic compression (1 TPa is equivalent to approximately 10 million atmospheres).

Accurately and precisely determining the pressure, however, adds yet another level of complexity to experiments under extreme conditions. Many of these techniques rely on a calibrated pressure standard. And until now, most experiments relied on extrapolations of low-pressure calibration measurements or theoretical models to determine the pressure at such extreme conditions.

Scientists from LLNL, Sandia National Laboratories, and the University of Hyogo have changed that by performing experiments at NIF—the world’s most energetic laser—and the world’s most powerful pulsed-power facility—Sandia’s Z machine in Albuquerque, New Mexico.

Using a new approach, dubbed shockless or ramp compression, the team determined how gold and platinum compress when they are squeezed to 1 TPa with extremely high precision. Then they used their data to derive new pressure scales to 1 TPa. The research was published on June 4 in Science and featured in a special “Perspectives” section.

“NIF and the Z machine are unique facilities,” said LLNL physicist Dayne Fratanduono,  lead author of the publication. “We really pushed their capability to perform the most precise measurement possible. To do shockless compression, we use either several laser beams or the pulsed-power source to gradually squeeze our sample. But the key is to very carefully control the rate at which we increase the pressure on the sample, to avoid forming a shock wave that would ruin the experiment. And you have to keep in mind that the whole experiment lasts much less than a millionth of a second.”

And as LLNL physicist and co-author Marius Millot, added, “the trick is that most materials become stiffer as they are compressed, so all we have to do is to guess by how much, and then find a machine that will not only provide enough power, but also enough control to realize the experiment.”

According to Fratanduono, several other areas were key in achieving the experiments’ high level of accuracy: an incredible level of precision in the machining of micron-sized steps onto the targets; the measurement of those steps; and ultrafast velocimetry measurements that allowed the research team to determine how the sample is compressed.

“This is really the culmination of multiple decades of technological developments,” Fratanduono said. “It took several years of development to reach this level of maturity in the experiments and combining the individual advantages of NIF and Z, the two best high-energy-density facilities, also was key to really tightly constrain the material response of gold and platinum.”

The team anticipates these new pressure scales will allow fellow scientists around the globe to easily, yet precisely, determine the pressure in their experiments by simply measuring the density of a piece of gold or platinum compressed together with their sample of interest.

“This is a huge step forward because with much better pressure determination in the experiments, we will be able to really test theoretical predictions and benchmark quantum simulations made with the world’s most powerful computers,” Fratanduono said.

“This will provide a solid foundation for future discoveries using static and dynamic compression as we continue to test our understanding of the quantum theory of condensed matter, an area of active research at the conjunction of condensed-matter physics, material science, and quantum chemistry,” he said. “Because our work will enable more precise measurements of the properties of planetary constituents at the relevant TPa pressures, we also expect to attract the interest of geophysicists, planetary scientists, and astronomers.