LLNL has received two significant awards that will help advance the next stage of developing fiber-optic cable technology with the potential for greatly increasing the capacity of the world’s broadband telecommunications networks.

The lab’s E-band fiber optic amplifier, a project created by a team of researchers from NIF & Photon Science and funded by the Lab’s Innovation and Partnerships Office (IPO), received a $150,000 award from the Department of Energy (DOE) Office of Technology Transitions. The IPO will match the award.

In addition, the amplifier won a 2018 TechConnect Defense Innovation Award, which recognizes technologies judged to have a “potential positive impact” for warfighters and national security. 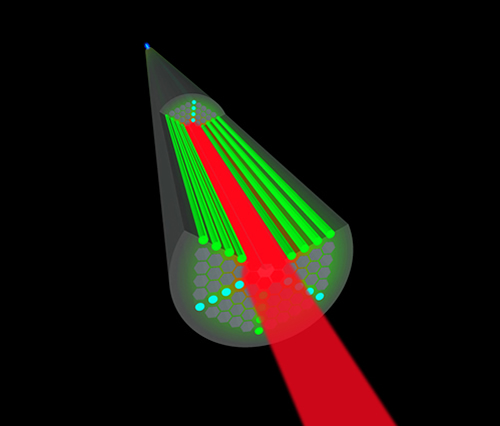 Artist’s illustration of a new optical fiber that could double the bandwidth of fiber-optic cables. Credit: Mark Meamber

David Dawes, an IPO business development executive, said the announcements were great honors for the Lab and “represent an important recognition of the value proposition for E-band amplifier development and a key opportunity to showcase the technology to government agencies and defense contractors looking for solutions to the growing demand for bandwidth.”

The project could provide benefits to anyone who is online, a huge audience which by some estimates encompasses nearly half of the world’s population. That usage places a burden on the vast network of fiber-optic cables—thin strands of glass or plastic transmitting light carrying data—that make up a backbone of the telecommunications infrastructure.

The light, however, loses power over distance due to attenuation, so existing fiber-optic networks have inline amplifiers doped with erbium, a rare-earth metal, to provide signal boosts.

The E-band fiber-optic amplifier concept spun out of NIF&PS research into using neodymium-doped optical-fiber lasers, which operate at a wavelength of 1,330 nanometers (billionths of a meter), 1,064 nm, and 920 nm.

In the course of building custom optical fiber cables for NIF high energy density and laser experiments, Lab researchers created new fiber that efficiently generated laser power and optical gain in the region of the electromagnetic spectrum between 1,390 nm and 1,460 nm. That transmission region is known as the E-band, separate from the C-band (1,530–1,565 nm) and L-band (1,565–1,625 nm) in which existing erbium-doped fiber amplifiers operate.

The Lab’s E-band fiber-optic amplifiers are designed to fit into the network alongside the existing erbium-doped amplifiers, saving the time and expense of replacing or augmenting thousands of miles of installed fiber-optic cables.

“The benefit to this is basically doubling the capacity without having to run double the lines,” said Leily Kiani, a postdoctoral researcher who is a member of the NIF & Photon Science Fiber Technologies Group. “We think it’s a home run.” (To read more about Kiani, see “A Laser Focus on Fiber-optic Upgrades”) 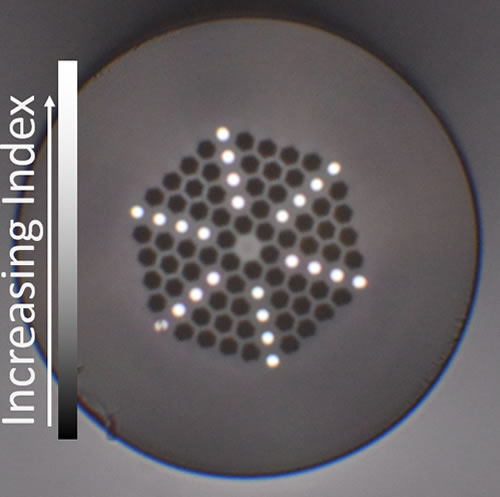 End-face view of the new optical fiber. The fiber has an outer diameter of 126 microns and the observable features are 6.6 microns apart. The center spot is doped with neodymium ions, the same dopant used in NIF’s lasers, but the material is fused silica glass instead of phosphate glass. The bright dots are GRIN (gradient-index) inclusions, and the dark spots are fluorine-doped fused silica, which have a lower refractive index than undoped fused silica.

The Fiber Technologies Group has developed an E-band fiber-optic amplifier prototype built on a tabletop, but needed to move to the next level to prove the concept to the telecommunications industry.

That’s why the DOE’s Technology Commercialization Fund (TCF) award is important: The funding moves the project a step closer “to building an amplifier that is compatible with commercial technologies,” Kiani said. “Eventually, we could add it into where existing repeater stations are now and do field testing.”

The Fiber Technologies Group hopes to work with a commercial partner to design smaller prototypes that are ready for field testing.

“We would like to attract partners to get into the second phase and beyond,” she said. “But getting the technology demonstrated in a way that’s attractive to a commercial company is exactly what we need to do. They are hesitant to invest in something that has only been tested in a lab environment.”

The TCF funding, which DOE announced on Aug. 22, was part of more than $20 million awarded to technology transfer projects involving 10 national labs and 71 private sector partners. The Energy Policy Act of 2005 created the fund to promote promising energy technologies. DOE received more than 100 applications for funding this fiscal year.

“By connecting innovators at our national labs with entrepreneurs in the private sector, DOE is breaking down barriers and finding the nexus between ingenuity and opportunity,” Secretary of Energy Rick Perry said in a statement. “The projects announced today will further strengthen those efforts across a broad spectrum of energy technologies and advance DOE’s important mission of technology transfer.”

A Forum to Demonstrate E-band

With the TechConnect award, NIF’s E-band project gains a spot at the annual Defense TechConnect Fall Summit & Expo in October in Tampa, Florida. The summit brings together representatives from the defense and private industries, federal agencies, and academia to learn more about developing warfighting and national security technologies.

The summit gives innovators a forum to promote their technologies and find more support for development, said Dawes, who will be on hand at TechConnect to showcase the E-band innovation.

In his written description for the conference’s website, Dawes said E-band technology could enable “exploitation of an untapped spectral region, potentially doubling the bandwidth of existing installed fiber, and offers a level of physical security from cyber threats not previously possible in existing fiber installations.”

Dawes also noted that “modern expeditionary military missions generate and exchange massive amounts of data that are used to produce situational awareness and guide decision-making. Much of the data must travel long distances along backbone communications networks composed of high-capacity links that interconnect command centers. Bandwidth exhaustion challenges require new solutions that operate on the current installed optical fiber, but outside the crowded C- and L-band spectrum.”

A TechConnect selection committee ranked E-band among the top 15 percent of technologies submitted in a defense innovation challenge due to its potential positive impact “for the warfighter and national security.”

“It’s certainly good to be highlighted,” said Dawes, who will get a few minutes to make a presentation to the conference audience. “From that, we will hopefully make a lot of connections and get new people interested as well.”