Hit Me With Your Best Shot

Building targets for large-scale physics experiments might seem like a routine task for LLNL’s Target Fabrication (Target Fab) Team; in a little more than a decade, they’ve gone from producing two NIF targets a year to nearing an average of eight NIF targets a week. But there’s nothing routine about Target Fab—every product they make is a complex union of science and engineering, built specifically to answer big questions with tiny devices.

In Fiscal Year 2017, Target Fab made 429 targets for experiments on NIF, along with 952 additional targets for the University of Rochester’s OMEGA and OMEGA-EP lasers, operated by the University’s Laboratory for Laser Energetics (LLE). With each passing year, these targets get more intricate as new features, materials, and structures are incorporated into the designs. As these laser facilities help scientists advance understanding in Stockpile Stewardship and Discovery Science, precision and collaboration are critical. 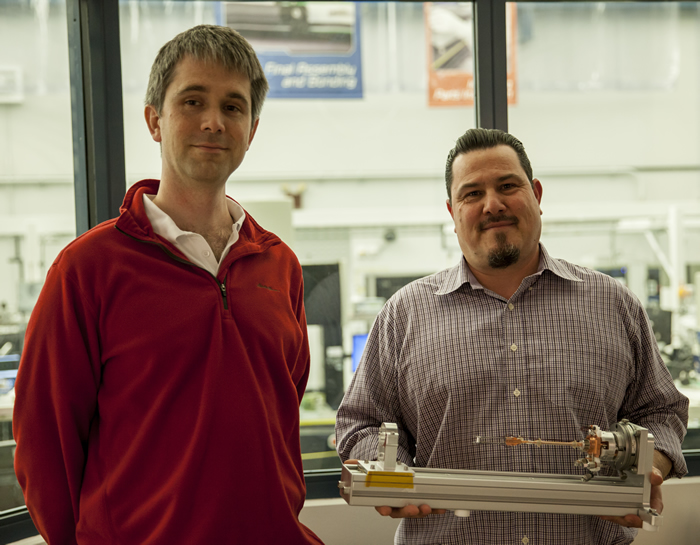 “It›s an interplay between what we produce and what the next ideas are in physics,” says Michael Stadermann, an LLNL materials scientist. “When we do the shots and the experiments, we often observe unexpected results. Physics will come up with a hypothesis, and then we either build a target that compensates for the effect, or that studies the effect.”

Recently Target Fab, in conjunction with its industrial partners, has had success integrating five-micron capsule fill tubes as the new standard for deuterium-tritium targets, in an effort to mitigate fill-tube-caused perturbations in NIF implosions. One of the other recent challenges for Target Fab has been capsule support. Previously a target capsule (a plastic or metal shell filled with hydrogen isotopes) was suspended within the hohlraum by a polymer membrane “tent” only tens of nanometers thick. But experiments showed that the capsule support, like the fill tube, can interfere with the implosion. As a result, several new target designs have been assembled to investigate different capsule support strategies in the hohlraum in hopes of reducing implosion perturbations. 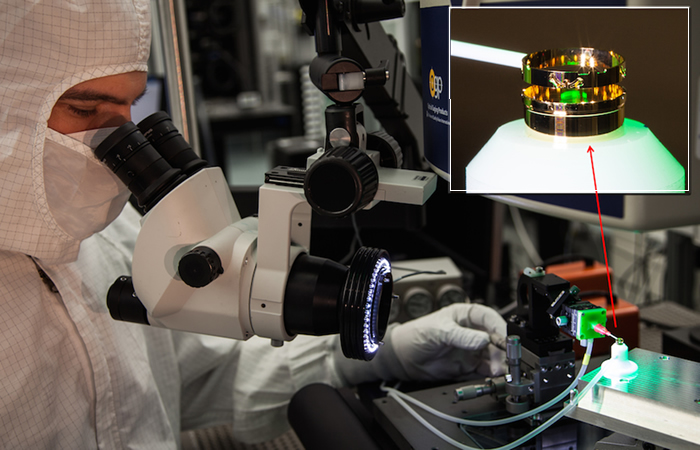 In the Target Fabrication Facility, technician John Bigelow assembles a prototype alternative target that has a four-sectioned hohlraum. The top and bottom two sections sandwich membranes that will capture the capsule with minimal spot contacts. The membrane in the photo (see inset) covers a lower section as the second section is being lowered into place. The 50-nanometer-thick membrane is a clear polyimide with a thin layer of amorphous carbon. Once together, these sections will be mated with a like pair of sections, with the capsule in between.

There are other challenges, too. Stadermann cites the design of hohlraums themselves as an opportunity for further investigation. NIF’s beams are so energetic, when they strike the inner walls of the gold hohlraum they begin producing gold plasma that expands into the hohlraum and inhibits other drive beams from getting through to the wall. This creates an imbalance between the beams’ drive on the hohlraum walls, limiting the amount of x-ray energy that can be delivered symmetrically to the capsule during an experiment.

Specialized foams are emerging as a viable alternative for both capsule support and hohlraum fabrication, as they can be made out of nearly any material, at nearly any density, says Stadermann. Traditionally, these foams are made using chemical reactions, but Target Fab researchers and engineers are exploring future use of additive manufacturing to “print” low-density foams, which are otherwise difficult to shape properly. Target Fab’s research and production teams are beginning to understand and utilize specialized foams to line hohlraums and help control drive symmetry and improve performance.

Rochester’s OMEGA laser is an important piece of the research and development puzzle. Because shots on NIF are comparatively expensive, LLNL researchers don’t want to spend them simply testing various material densities of foams—they’d prefer to know which foam performs best and employ that to do more useful science. They send a suite of options to Rochester, where they’re tested one after the other until the performance metrics are achieved. Because OMEGA can perform nominally 14 shots a day (compared to one to four a day for NIF), physics designs can be evaluated more quickly.

The results have been exciting. The new BFIELD Loop target is designed to study laser-driven magnetic fields. Doing so necessitated the construction of a cylinder made of a plastic foam, then surrounding it with rings of foils and orienting holes in the cylinder to accommodate the individual laser beams. 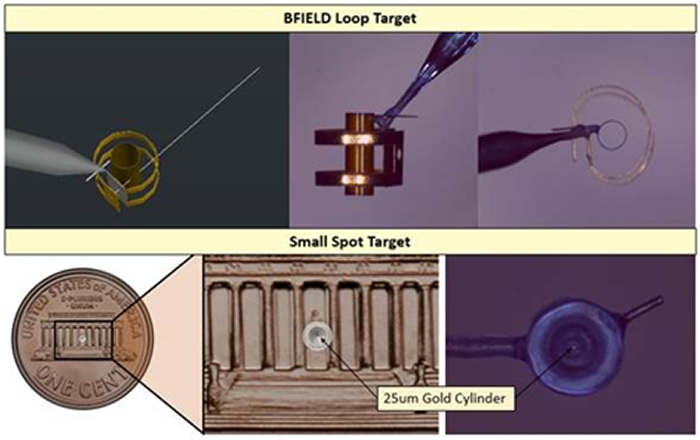 The BFIELD Loop targets include a CH (plastic) foam cylinder surrounded by a looped configuration of foils with holes oriented toward specific laser ports. These targets study the production and evolution of laser-driven magnetic fields. The Small Spot targets contain a very small gold cylinder precisely placed at the base of a machined cone in a CH cylinder.

Another novel platform for NIF experiments is called Small Spot, which is housed in a plastic cylinder similar to the BFIELD target. Within the tube is a precisely machined cone, which contains yet another cylinder. The smallest cylinder is made of gold, like many of NIF’s hohlraums. Improved backlighting from this experiment will enhance NIF’s Compton radiography resolution, which measures, among other things, the primary way radiation effects the human body in medical applications.

Foam is also a major component of Target Fab’s El Nino project. El Nino is the first of its kind: a complex-hydrodynamic target for use with NIF’s Advanced Radiographic Capability (ARC). These packages consist of a four-part hohlraum, a silver wire backlighter, and 45-nanometer-thick tents. During a shot from the ARC petawatt laser, the experiment will study how the foam compresses. If successful, the multi-layer foam could be implemented in future radiographic experiments for Stockpile Stewardship, which accounts for 40 percent of NIF’s yearly shots.

Thanks to a knowledge transfer partnership with the Laboratory, the United Kingdom’s Atomic Weapons Establishment (AWE) has begun delivering physics packages to LLNL that also use low-density foam. AWE’s packages are designed to study radiation transport for Stockpile Stewardship. Much smaller than the diameter of a U.S. penny, AWE’s packages arrive only partially assembled before arriving in Livermore and Rochester where they go through final assembly near their final location.

“Many of the targets that we shoot on NIF get assembled here specifically because they are so fragile, we can’t risk shipping them,” says Rich Seugling, the deputy program leader for Target Fabrication. “They wouldn’t survive the shocks typical of commercial shipping.” For testing materials on OMEGA, however, targets can be less complex and therefore are more resilient. Fully assembled AWE NIF targets are scheduled for delivery in fiscal year 2019.

Examples of LLNL-AWE radiation transport targets for stockpile science experiments on NIF. LLNL has transferred knowledge of foam manufacturing, machining, and assembly, culminating in the first set of AWE-manufactured foam physics packages which were shipped from AWE to LLNL in support of campaigns later this year.

These new targets are the result of significant collaborations between the Laboratory and global and national partners. Collaboration can also appear at a more local level: integrating the scientists and engineers in closer quarters means that ideas for custom targets can begin in casual hallway conversations. “One of the benefits of bringing the independent programs together is being able to utilize both capabilities more efficiently,” says Seugling. “At the simplest level, you can walk down to each other’s office and ask a question.”

From there, available platforms can be used, or a scientist like Stadermann can begin developing a new solution. Given the limited number of yearly shots, however, staff time can be at a premium. “There’s usually more ideas in physics than we can turn into targets,” Stadermann says.

“I learn things all the time, every day,” adds Seugling. “I get to work with a team of people that ranges from the machinist and the technicians who are doing some amazing things by hand, to the scientists who are running exotic 3-D simulations of experiments that take months and months to run. They all have to come together to be able to say, ‘I know something today that I didn’t know yesterday.’”

The National Ignition Facility is a world premiere institution of high energy density (HED) and inertial confinement fusion (ICF) science, working to advance national security priorities such as ensuring the nation’s nuclear stockpile is safe, secure, and reliable through its Stockpile Stewardship Program as well as furthering basic science.

Since 2009, NIF has been home to the world’s largest laser system. By focusing 192 lasers on a single target, NIF creates conditions—temperatures of hundreds of millions of degrees and pressures 100 billion times that of the Earth’s atmosphere—that are similar to those found in stars and nuclear weapons.

This new video, prepared for the American Physical Society (APS), describes NIF’s missions and science and captures the importance and excitement of conducting experiments on the world’s highest-energy laser system: