A novel optical fiber developed by researchers at the Laboratory for Laser Energetics (LLE) at the University of Rochester in collaboration with LLNL and Fibercore in the United Kingdom is capable of both amplifying and polarizing light. 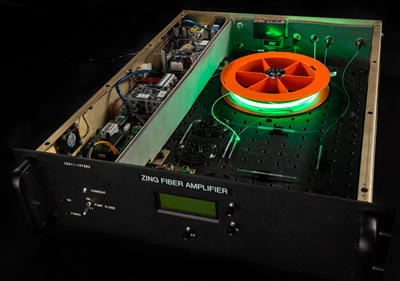 In the NIF laser system, a fiber laser called the master oscillator is the seed source of the laser pulse that ultimately is amplified to more than four million joules of infrared energy. “The PZ fiber amplifiers are very important for high energy/power lasers to minimize the amplitude modulation generated from the phase modulation that we intentionally put on the beam,” said NIF Laser Systems Manager Mark Bowers. “These amplifiers allow the amplification of only one polarization, and no other fiber amplifiers in the world can accomplish this.” Although the fiber optic portion of NIF is only one source of AM, it can become the dominant source if not controlled.

Currently, both science and industry use polarization maintaining (PM) gain fiber for amplification. When PM fiber components are connected together, small alignment errors in the optical axis of the two fibers generate a second component of polarization (see the video). The two polarization components travel through the fiber at different velocities, causing a phase shift. Along with phase modulation, this phase shift generates AM. 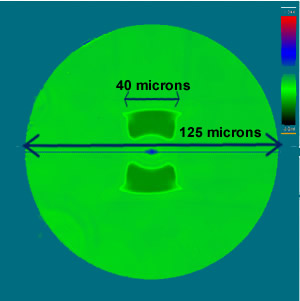 This false-color refractive index map of the end face of the PZ gain fiber displays the polarizing and amplifying core of the fiber in the center of the image, along with the stress-inducing “Bow-Ties” above and below the core. The core is less than five microns in diameter. The more fiber components that are connected together, the more the AM noise grows, decreasing the fidelity of the signal. When used in high-power laser systems, PM amplifiers require more overhead to maintain optimal polarization and may require both automated and manual adjustments.

Connecting PZ fibers also results in alignment errors, generating a second polarization component. In PZ fiber, however, this second component leaks out of the fiber and cannot interact with the main component; therefore no AM is generated due to the connection. The pulse fidelity remains high no matter how many components are connected, there are no noise spikes that can cause damage, and no energy is lost during amplification. The PZ fiber is still subject to material dispersion, which ultimately determines the maximum length of fiber before requiring a negative dispersion compensator to maintain low AM.

Unlike PM or single-mode fibers, which are extremely intolerant to changing conditions and must constantly be manually adjusted, the PZ fiber is temperature-stable and wavelength-independent, requiring little to no manual intervention should conditions change. It will allow for better performance when using fiber front ends that are tunable in wavelength or are spectrally broadened by combinations of high-frequency phase modulations.

The technical developments showcased in the PZ fiber eventually could extend to telecommunications fibers, making them faster, more reliable, and more energy-efficient. “By using this type of amplifier it is possible to add twice the number of signals over telecommunication fibers by using PZ amplifiers with PZ combiners into polarization maintaining fibers,” Bowers said. “This is known as polarization multiplexing, and can only be done this way and maintain ultra-stable signals over long communication paths.” 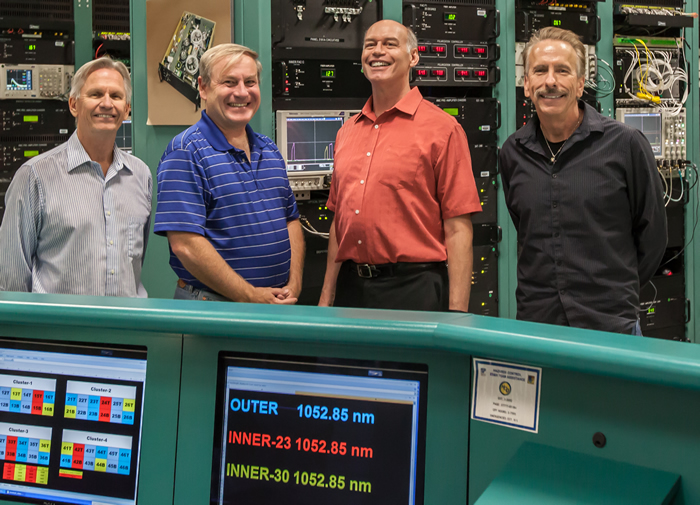 The fiber’s stability and reliability also make it ideal for use in navigational gyroscopes on airplanes and ships, as well as for use in health and biomedical applications that involve medical probes and microscopy—all essential tools for the continued improvement of travel, trade, health, and defense.