Talk about being responsive to the needs of your customers.

The diagnostic, dubbed Sentinel because of its resemblance to the squid-like search-and-destroy machines in the “Matrix” films, was needed for a three-shot x-ray source development “mini-campaign” conducted on July 3 for NIF’s National Security Applications (NSA) program. The program is developing ways to test the effects of various types of radiation on components important to U.S. defense systems (see “Testing Neutron Effects on Electronics”).

The Sentinel diagnostic (left) and its namesake from the “Matrix” films. Credit: Warner Bros.

“In order to make the measurements we needed, we needed to make a new diagnostic,” said NSA Program Manager Brent Blue. “Our customers in the National Security program typically are on yearly cycles, and they have multiple goals that they’re trying to meet in a one-year time-frame. So in order to meet one of their evolving goals we had to quickly develop this new diagnostic.”

The Sentinel is a 16-channel line-of-sight x-ray spectrometer mounted in a diagnostic instrument manipulator (DIM) on the equator of the NIF Target Chamber. In the July 3 experiments, its function was to determine the x-ray spectrum and yield from a new xenon-filled “gas pipe” target driven by about 700 kilojoules of ultraviolet light—more than 60 terawatts of peak power—in two seven-nanosecond-long pulses stacked end to end. The experiments’ goal was to develop a tailored x-ray source approximating a 13-nanosecond, one-keV (1,000-electron-volt) blackbody. 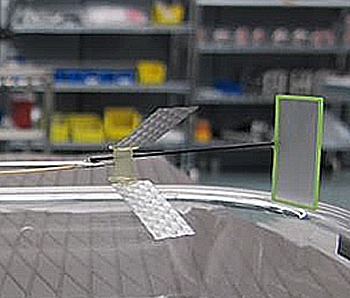 The xenon-filled gas pipe target used in the July 3 experiments. The target has a new x-ray filter designed to reduce x-rays in the 0-to-one-keV range. The gas pipe source is on the left (with dimpled shields for the Dante diagnostic) and the new x-ray filter is on the right.

Similar in function to the 18-channel Dante diagnostics used in many NIF experiments (see “Dante: Measuring NIF’s Inferno”), the Sentinel is able to measure x-ray output at the target’s equator, while the Dantes are permanently located off the equator toward the Target Chamber’s north and south poles.

“When we do our exposure tests on samples they always sit in the equator,” Blue said. “So it’s very important to our customers to know exactly what the spectrum is, and what the yield of our targets is, on the equator of the Target Chamber. We are able to field Sentinel in the same DIM that we’ll put our samples in for future shots. Directly making this measurement helps reduce our error bars and makes NIF a better facility for our customers.”

The targets, or x-ray sources, in the experiments were low-mass, thin-walled gas pipes filled with xenon gas. X-ray diodes in the Sentinel and Dante detectors determine the x-ray yield from the targets; each diode is filtered to record the x-ray power in a specific part of the spectrum. There are enough channels in the diagnostics that the spectral content of the x-ray emission can be reconstructed in specific spectral bands.

“These were our seventh, eighth, and ninth shots this (fiscal) year for this source development platform,” Blue said. “The last six shots have been looking at tailoring the output spectrum—not just doing what the source naturally does, but trying to actually make a very specific output spectrum.” A tailored x-ray spectrum is needed so the researchers can address the specific physics their customers are trying to understand.

“We’re still in the process of analyzing the results” from the first Sentinel experiments, Blue said, “but they look very promising. It was very impressive, the way that everything got set up. Even with a three-month turnaround, the need to understand the target, the standoff distance—everything came together and our signal levels were exactly what we expected. This would not have been possible without building on the expertise and strength of NIF Target Diagnostics, the NIF Facility teams, and our partnership with NSTec.” 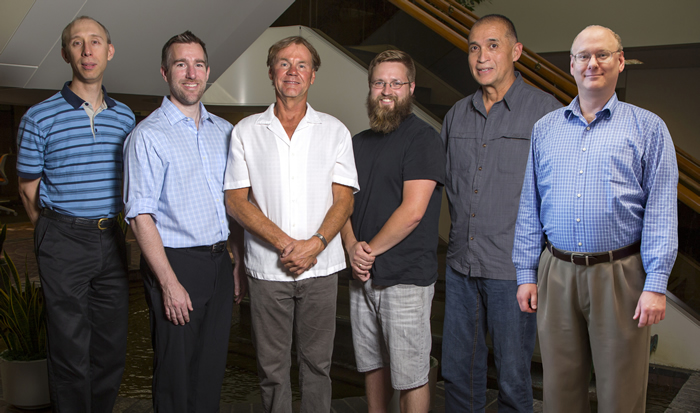 LLNL researchers are exploring the use of metal 3D printing to create strong, lightweight structures for advanced laser systems—an effort they say could alter the way lasers are designed in the future.

In a Laboratory Directed Research and Development (LDRD) program, physicist Ibo Matthews and his team are experimenting with a new research-based metal 3D printer, one of only four of its kind in the world, using a customized software platform capable of unprecedented design control. 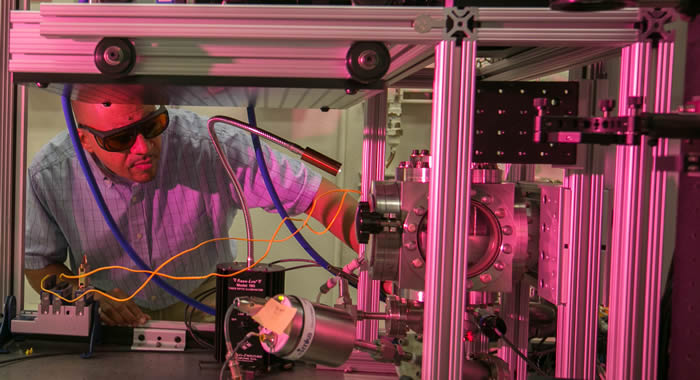 The powder bed laser-melting printer, made by the Fraunhofer Institute for Laser Technology (ILT) and German startup Aconity 3D, was installed in December 2015. Lab engineers have added diagnostics and high-speed cameras to examine thermal emissions and to image the surface of parts as they’re being built. Matthews said the modifications will help the researchers determine how defects or deformations occur during the 3D printing process.

“It’s very flexible; it allows us to change any of the parameters we want,” he said. “We’re developing confidence in what we’ve built. If any defects occur, it is our aim that the user can have a 3D map available at the end of the build that shows what and where it happened.”

“It puts us two years ahead of where we would’ve been.”
—Ibo Matthews

Matthews and his team are building on their experience in laser materials processing and interaction gained in support of both NIF and directed energy projects to develop new approaches to metal 3D printing. Their work is part of an overall strategy to broaden the NIF & Photon Science laser applications portfolio and maintain core competencies in laser-matter interaction science. Moreover, NIF scientists are intrigued by the potential for the metal 3D printing platform to support lasers—not just at NIF, but also in airborne systems that need to be extremely lightweight, such as those used for remote sensing and aerial scanning.

“With precision, predictive control of 3D printing you can put the stiffness where you need it,” said Mike Carter, NIF & PS program director for Department of Defense Technologies. “You can create functionally-graded structures for optical lasers and mounts that are impossible to make by conventional manufacturing methods.”

NIF already has utilized some metal parts printed at the Lab in structures for lasers. In order to use them in critical systems on a regular basis, however, researchers must be assured that each part is sound.

To speed up the certification process, Lab engineers are attempting to shorten the development phase by taking a completely different approach—a “feed-forward” method based on computer modeling instead of trial and error. If successful, said Wayne King of LLNL’s Physical and Life Sciences Directorate, the research could fundamentally change the way metal components—including those used in optical systems—are designed and fabricated.

“Unless you take a science-based approach to this, you won’t know why part A is different from part B,” King said. “We’re really pushing the state of the art. We’re at the beginning of seeing some applications of the technology already.” 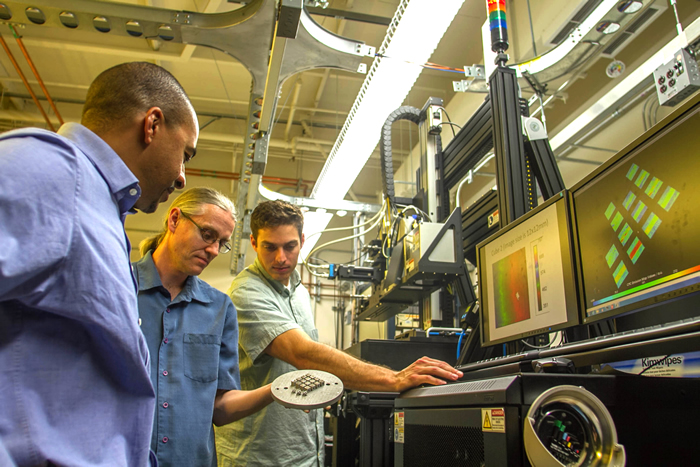 In the three-year LDRD project that began last year, Matthews and his team will be combining metal 3D printing with both high-fidelity optical diagnostics and high-performance computing to create more confidence in the parts they create.

“What we’d like to do is drive this process based on simulation, and create a ‘digital fingerprint’ of certification based on optical monitoring to ensure the part is built right the first time,” Matthews said. “We’d like to be predictive, based on our physics models, to find out what we can expect with any given build and have monitoring data to show that predictions matched the outcome.”

Matthews added that the Lab’s newest machine will go a long way toward discovering the capabilities and application of metal 3D printing for laser design.

“It takes you from this black box to something you have control over,” he said. “It puts us two years ahead of where we would’ve been if we hadn’t bought it.”

NIF & PS and the Lab’s Weapons and Complex Integration and Engineering directorates are jointly supporting the new printing platform.