Researchers are enthusiastic to take advantage of the recently commissioned NIF X-ray Spectrometer (NXS) for a variety of new time-resolved, high-resolution spectroscopic experiments on NIF.

The spectrometer will enable users to measure the x-ray energy emitted from high-temperature targets, which is critical to understanding the laser heating of the target; to measure emission from materials mixed into the highly compressed fuel of inertial confinement fusion (ICF) implosions, which lets users assess pollution that degrades implosion performance; and to measure the brightness of x-ray backlighters, which is critical for radiographing high-energy-density experiments.

The NXS, funded by the Defense Threat Reduction Agency (DTRA) and developed at the Laboratory for Laser Energetics (LLE) at the University of Rochester, is NIF’s first streaked x-ray spectrometer. The instrument consists of a housing that is attached to an ultrafast streak camera called a DISC and installed in a standard NIF diagnostic instrument manipulator (DIM).

“Streak” refers to the way the data are swept over the detector in the streak camera; a streaked spectrum is a spectrum that is resolved in both time and energy. With this technique the time history of the flux in individual x-ray lines can be monitored and studied.

The design and development of the performance requirements of the NXS was led by co-principal investigators Sean Regan of LLE and Kevin Fournier of LLNL. The NXS was engineered by Mark Bedzyk of LLE, with close coordination on design requirements with LLNL engineer Shannon Ayers and LLE engineer Milt Shoup. LLNL physicists Maria Alejandra Barrios, Fréderic Perez and Hui Chen took the lead in interfacing the spectrometer instrument with LLNL’s streak camera. Regan, Perez and LLNL’s Elijah Kemp led the effort to field the NXS at LLE’s OMEGA Laser Facility in April 2014 for calibration purposes before delivering the final hardware to NIF. Javier Jaquez, Mike Farrell and Abbas Nikroo of General Atomics developed several metal alloy coatings for the NXS calibration targets used on OMEGA and NIF. Chuck Sorce and Ray Bahr of LLE and Nick Whiting of LLNL orchestrated the complex NXS configuration changes efficiently and flawlessly during the calibration tests. Fournier and Barrios have since fielded the instrument on several NIF shots in order to demonstrate the instrument’s overall performance. Calvin Shipbaugh and Sarah Wilk managed the project for DTRA. 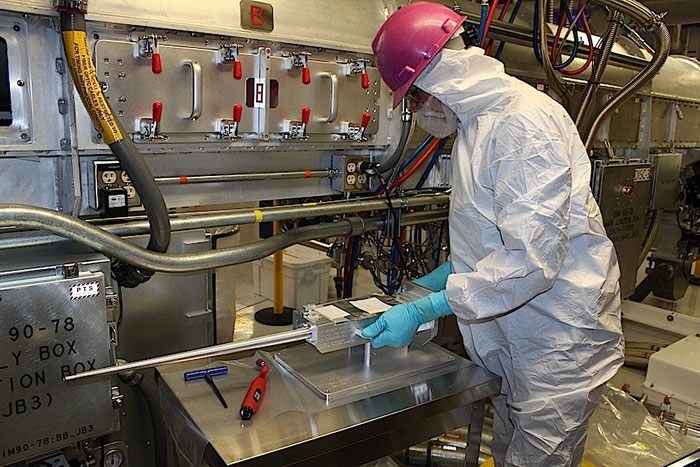 Deployment of the NXS continues the partnership between DTRA and NIF in developing test capability and facility diagnostic capability. The need for a spectrometer to make time-resolved measurements of x-ray emission from high-temperature plasma targets was identified by a high-level Department of Defense (DoD) Defense Science Board review in 2005 and again in a DoD JASON study in 2008. The DoD plans to use the spectrometer’s capabilities to characterize the x-ray environment that interacts with test objects inserted in the NIF target chamber. DoD testing of effects induced by x-ray exposure is a part of the NIF mission space. Three complete NXS units were funded through a basic research grant from DTRA and designed and built by LLE.

“The development of the spectrometer, the deployment, commissioning and calibration and the overall support to the user community has been a wonderful demonstration of collaboration between LLNL, LLE and DTRA,” Fournier said. “In all cases, all requirements have been met in what LLE has delivered to NIF, and the DTRA funding has been adequate and flexible, allowing us to perform off-line image plate calibrations led by Niko Izumi of LLNL in addition to the usual activities of deployment and commissioning.”

Shortly after its commissioning in June, NXS was used on a series of four backlighter development shots carried out in quick succession. “It was exciting to see that the spectrometer could be used on multiple shots in less than 20 hours,” Fournier said. “Now the NXS is being requested by many users from all the NIF user communities.”

In early September, for example, the diagnostic was deployed for a National Security Applications experiment in the system generated electromagnetic pulse (SGEMP) campaign to measure the yield and temporal characteristics of large-volume, high-energy x-ray sources for x-ray effects testing. The shot used the NIF lasers to create a high-temperature plasma from a krypton gas target that produced a high flux of very energetic x rays. The NXS measured both the spectral content of the x-ray emission and the time history of the main x-ray lines.

“We need both quantities, the spectral energy content and the time history of the x-ray flux, in order to diagnose and model the signals we measured with our custom diagnostic payloads in the equatorial DIMs,” Fournier said. “The known output from the x-ray sources allows SGEMP modelers and designers to develop precise experiments to isolate the physical phenomena of interest to their code validation program.”

In the works for NXS are high energy density (HED) experiments looking at equations of state of high-Z (high atomic number) materials at high pressures; HED researchers are planning to use the NXS in the near term for backlighter characterization. HED and Discovery Science users who are looking at the structure and interpenetration of colliding shocks are planning to use NXS to characterize their x-ray backlighters. And ICF users who are doing convergent ablator imaging experiments want to use the NXS to characterize the temporal history of their backlighters. 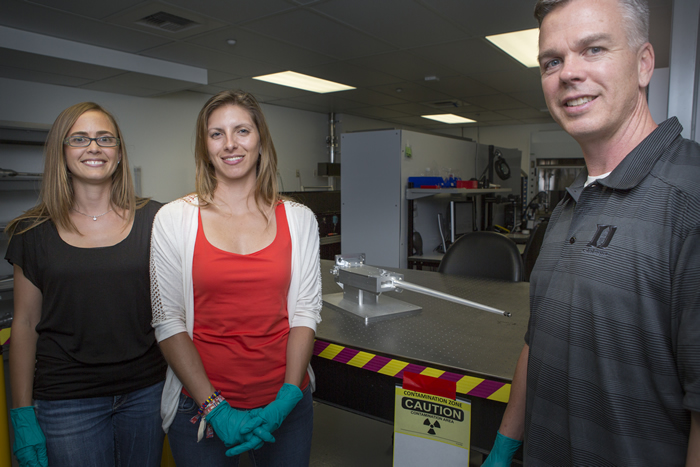