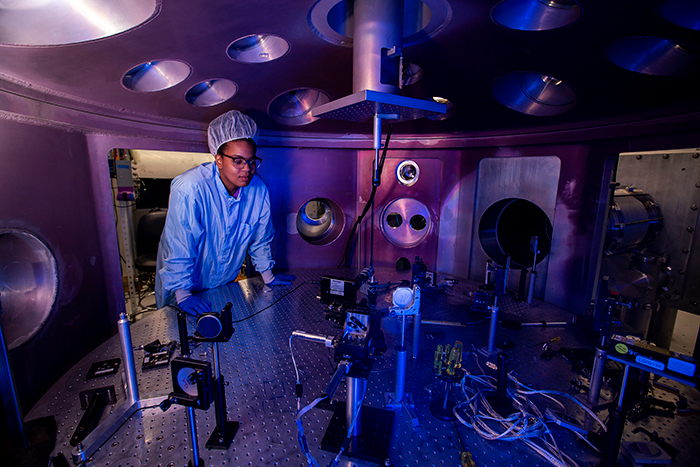 As a kid, Raspberry Simpson found inspiration in the mysteries of the universe while spending many hours after school inside New York’s Hayden Planetarium.

“I don’t really think I knew then I could be a scientist as a career, but I knew I was really interested in it,” Simpson said. “And I learned through lots of great teachers that this could be a job eventually.”

This year, the MIT graduate student spent time at Lawrence Livermore National Laboratory as a NIF & Photon Science Summer Scholar, doing her part to help unravel some of those same mysteries while laying the groundwork for an important future NIF plasma diagnostic tool.

Being a scientist “has been the best job that I could have,” she said.

Simpson, a PhD candidate in nuclear engineering at MIT, was also at LLNL as one of the four-member inaugural class of the Department of Energy (DOE) National Nuclear Security Administration (NNSA) Laboratory Residency Graduate Fellowship. The fellowship is designed to train scientists who are vital to meeting U.S. workforce needs in advanced science and engineering.

At LLNL, she was tasked with the early design of a Thomson Parabola Charged Particle Spectrometer (TP-CPS), a diagnostic planned for the National Ignition Facility and NIF’s Advanced Radiographic Capability (ARC) laser.

The instrument could be used for ion acceleration measurements, stopping power experiments, and laboratory astrophysics. She is also involved with an experiment in the Jupiter Laser Facility’s Titan laser investigating the scaling of proton acceleration in the multi-picosecond regime, said NIF physicist Tammy Ma, Simpson’s LLNL mentor.

Thomson Parabolas are frequently used on on other short-pulse facilities, such as the OMEGA-EP Laser System at the University of Rochester’s Laboratory for Laser Energetics. The instrument uses parallel magnetic and electric fields, which allows the simultaneous measurement of the spectra of different ion species depending on its charge and mass.

“She is adapting it for the particles we generate here at NIF and adding some modifications so that it will be more versatile than what we had before,” Ma said. “It will be incredibly useful for the short pulse experiments that we do, as well as Discovery Science experiments and maybe even ICF (inertial confinement fusion) experiments.”

“She’s basically doing the full design and physics requirements,” Ma added. “It is plunging her into NIF immediately. She gets to find out about the future experiments that we’re planning.”

Simpson has been talking to NIF&PS researchers to see how they think the device could be designed so it will be useful for their experiments, while also conducting tests on an older version of a similar diagnostic on the Titan laser.

Ma said Simpson has impressed her as “an innovator and a thinker.”

“She’s not afraid to tackle big projects or to reach out to people at the Lab to get the information that she needs,” Ma said.

Simpson said she enjoyed talking about the diagnostic’s ability to measure different particles at the same time.

“That will be powerful,” she said. “I just wanted to get the idea out there so people could start thinking about how they would craft an experiment around it or how they could use it in their current campaigns.” 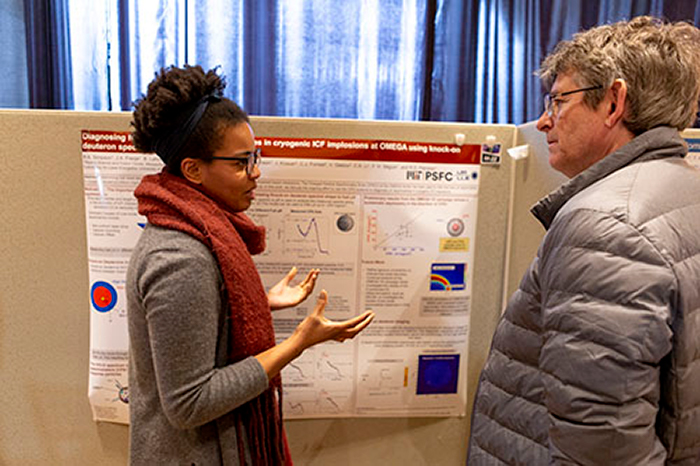 “I’ve gotten to see a tasting platter of HED science,” Simpson said. “It’s cool to meet people who are getting all these awards and they’ll still take the time to explain to me what are basic things for them.”

The 26-year-old New York City native was named for the raspberry leaf her mother found comforting during her pregnancy. Her mother also introduced her to places like the Hayden Planetarium at the American Museum of Natural History because she saw Simpson’s interest in science.

“She just put opportunities in front of me that she thought I would like. I did, and the ball kept rolling,” Simpson said. “My mother has always been my biggest champion. I get my work ethic from her.”

The Road to MIT

She earned an associate degree in physics at Bard College at Simon’s Rock, a liberal arts college for students who are ready to enter higher education after the 10th or 11th grades. While still at Bard, she participated in the MIT Summer Research Program (MSRP), getting the chance to work with MIT physics professors Lindley Winslow and Janet Conrad in the Laboratory for Nuclear Science. (See: From Summer Research Program to PhD Dissertation, MIT News)

The MSRP helps show undergraduate students who come from backgrounds that have traditionally been marginalized in science, technology, engineering, and mathematics (STEM) that “there is a space for you at MIT or a place like MIT and that you already have the tools to excel there,” she said.

Simpson went on to Columbia University, where she earned her bachelor’s degree in applied physics. While at Columbia, she received the chance to work on astrophysics experiments with Frank Merrill, an experimental physicist at Los Alamos National Laboratory.

Merrill became a mentor who “gave me confidence that I could be a scientist for real,” she said.

And at LLNL, she’s learned more about plasma physics and short pulse high energy density science from Ma, who “always has time to carve out for me whether I need mentorship or just to talk.”

“There’s a bunch of avenues that are super interesting within plasma physics,” Simpson said. “It feels like a new field almost all the time. And it feels like there’s more opportunities for young scientists to dig up something interesting.”

She’s also seen the importance of the type of team science prevalent at LLNL, where many bright minds come together to solve the toughest scientific mysteries in the universe.

“Fusion is hard,” she said. “With problems like that, there’s not a lot of space for ego. That’s why it’s also important to have diversity in science. These problems are too hard to have a very small sliver of the population working on them.”

Simpson is working on her PhD at the MIT Department of Nuclear Science and Engineering with academic advisor Johan Frenje. As part of her DOE NNSA Laboratory Residency Graduate Fellowship, Simpson will return to LLNL for another residency period in the coming months. Ultimately, she would like to work at a national lab.

“I just want to be impactful, to be helpful in the pursuit of science and to do something new,” she said.