One of the challenges inherent in operating a first-of-its-kind facility like NIF, the world’s largest and highest-energy laser system, is unexpected consequences. A prime example is the recent ironic realization that components designed to protect NIF’s valuable grating debris shields (GDSs) from debris are themselves causing debris-induced damage that ultimately limits the number of facility shots. 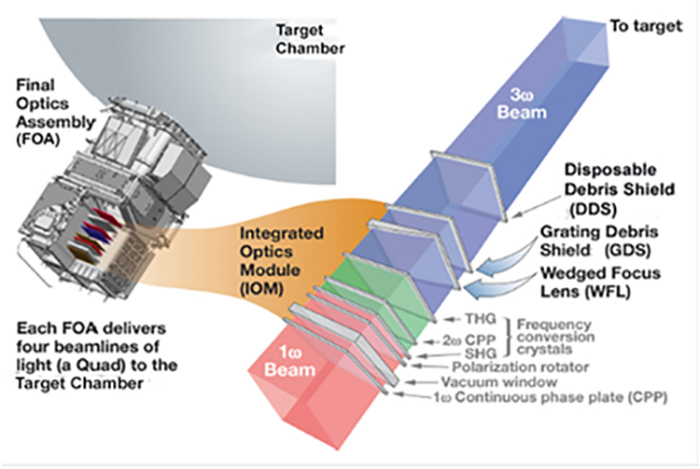 To address the problem, researchers have developed and are now installing high-quality fused silica debris shields to protect the GDSs from debris generated by low-cost disposable debris shields (DDSs). By cutting the rate of optics damage, the new shields are expected to increase NIF’s shot rate and enhance the drive toward fusion ignition.

When NIF’s 192 powerful laser beams vaporize and explode a target at the center of the Target Chamber, tiny bits of target debris and shrapnel speed back into the laser beampaths at thousands of feet per second. Without protection, NIF’s valuable final optics could sustain unacceptable damage during every shot.

Initially, said NIF optics physicist Wren Carr, most of the damage to the GDSs was from impurities and surface microfractures left on the optic during manufacturing. 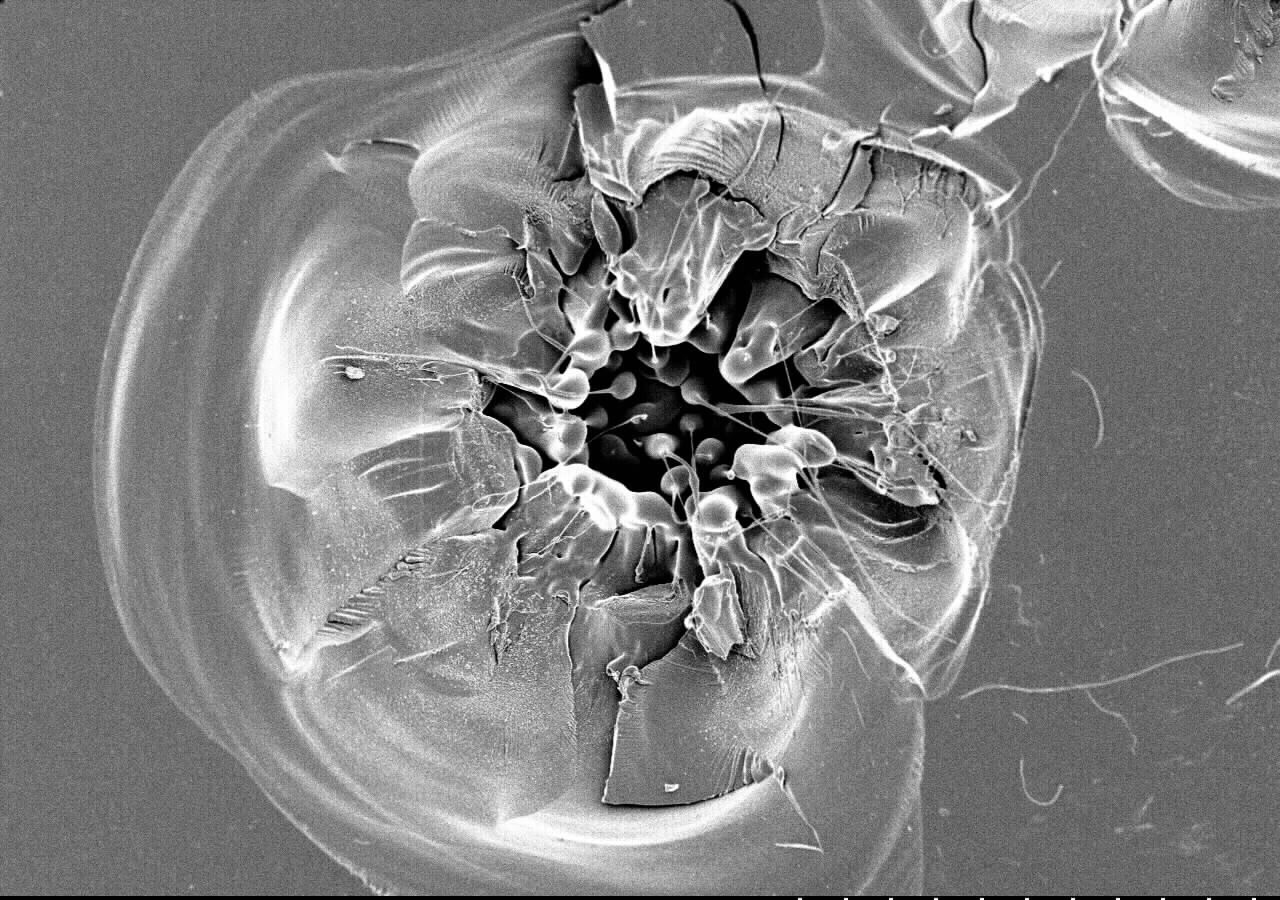 (Above) A scanning electron microscope image of a newly initiated damage site on a silicon dioxide (SiO2) optic. Damage sites typically start out with diameters of 10 to 20 microns, or about 1/10th the width of a human hair. (Below) A series of optical microscopy images showing the growth of a laser-induced damage site on the exit surface of an SiO2 optic. The initial size of the damage site is about 50 microns, and each image is taken after a single laser exposure of about 10 joules per square centimeter.

As these imperfections, or damage precursors, are struck by NIF’s high-intensity laser beams, they absorb enough energy to heat a small region to about 10,000°F. This creates tiny damage craters on the surface that grow with repeated laser shots and eventually require the GDS to be taken out of service and refurbished.

To prevent this, the final optics assemblies at the ends of the beamlines include a pair of debris shields. The primary shield, the GDS, is itself protected by a relatively inexpensive “sacrificial” DDS. The GDS optics, however, are still being damaged and require replacement more often than desired.

Researchers were able to develop new techniques, such as a patented chemical process called the Advanced Mitigation Process (AMP) and an LLNL-developed colloidal silica particle anti-reflective coating, to limit the damage to the GDSs (see “Next Generation NIF Optics Boost Energy and Limit Damage”).

The GDS, however, is also damaged by debris originating from the Target Chamber and from laser-induced damage of the impurities in the DDS.

“There was a potpourri of things causing damage to our optics,” Carr said, “and as we improved the intrinsic damage resistance of the GDS, these other damage mechanisms that had been lost in the noise became more obvious.”

The lower-quality DDSs are composed of commercial low-cost borosilicate glass. When struck by the intense ultraviolet light from NIF’s lasers, the tiny inclusions in the DDS glass are damaged, grow, and occasionally erupt though the surface of the DDS. These input surface bulk eruptions (ISBEs) “spray the GDS with molten glass fragments and shards traveling at a kilometer a second,” Carr said. 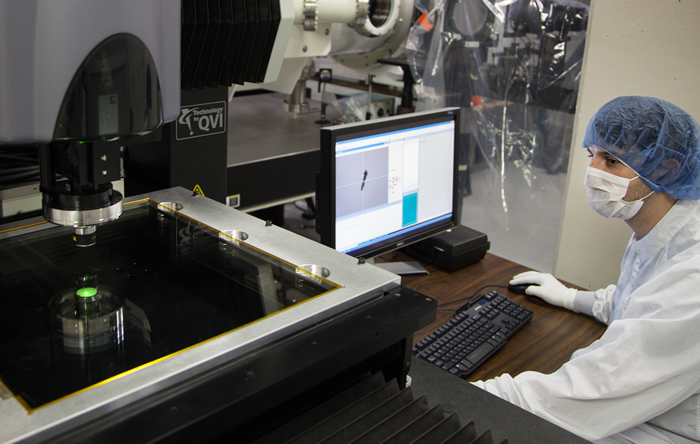 Electro-optic technician Ryland Plummer identifies input surface bulk eruptions, or damage sites, on a NIF disposable debris shield (DDS) that was removed from a NIF beamline after a shot. The eruptions on the DDS can introduce borosilicate glass fragments into the beamline, contaminating other optics. Credit: James Pryatel

The debris has led to a significantly higher (10- to 100-fold) laser damage rate on the GDS. This means the optics must be removed from NIF for damage mitigation more frequently, driving the rate of GDS refurbishment and replacement to capacity and limiting the number of NIF shots in fiscal years 2019 and 2020.

“We don't know exactly what (the inclusions) are,” Carr said. “The hypothesis is that they’re little chunks of slag from the manufacturing furnace. The DDS is basically window glass, and any requirement that they be inclusion-free would make the optics too expensive for the way they’re used.”

After searching unsuccessfully for an economically and optically acceptable DDS replacement, the researchers decided the best solution would be to insert a higher-quality, inclusion-free fused silica debris shield (FSDS) between the DDS and the GDS. 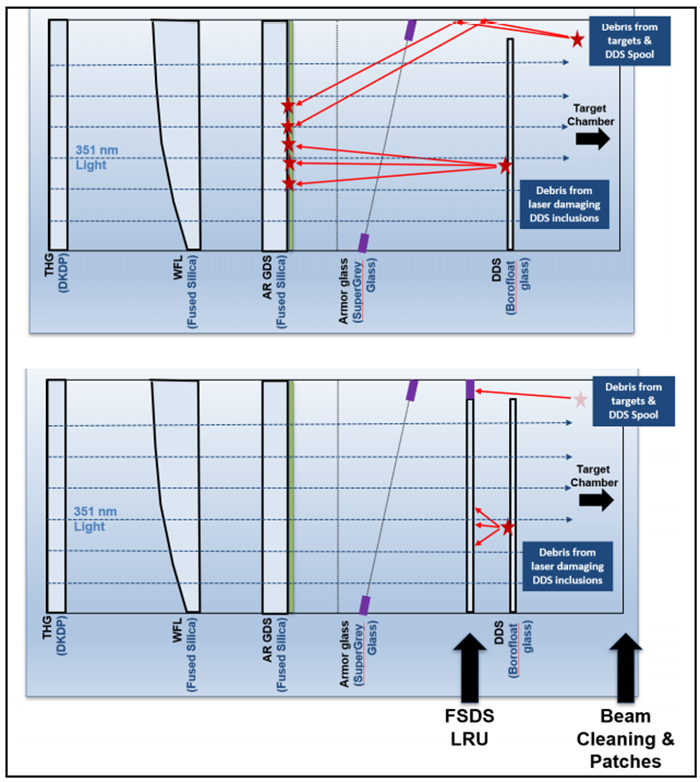 Damage sources for some of the final optics in a NIF beamline. The top chart above shows the current NIF configuration of the majority of NIF beamlines, outlining the major debris sources responsible for reducing GDS optic lifetime. The chart below depicts implimentation of the fused silica debris shield (FSDS) optic in a line-replaceable unit (LRU) and other particle-blocking mitigitions which have been implimented on 48 beamlines to date. Two sources of particle deposition on the GDS were eliminated by the addition of the fused silica screen and an anti-reflective (AR) coating.

“Fused silica is a superior material manufactured in a different manner (than borosilicate), and you can have higher standards,” Carr said. “The (FSDSs) are about five times more expensive. That’s why we don’t just replace the DDSs with the silica ones. The role of the DDS is to protect the next optic, the GDS, from the target debris. A fused silica shield is still going to be pelted with the target debris, and then these relatively expensive optics won’t last any longer than the relatively cheap DDS.”

An FSDS will be used in a single installation on NIF until it accumulates enough damage that it reduces the transmitted laser light by 1 percent; then it’s discarded.

As of early this summer, FSDS line-replaceable units had been installed in 48 of NIF’s 192 beamlines. More than 90 people supported a NIF team in the piloting, commissioning, and production implementation of the new FSDS optic. All 192 beamlines will be converted over the coming years as additional resources and components become available.

As if the DDS problem wasn’t bad enough, another, and even more unanticipated, source of debris was found to damage the optics in the lower-hemisphere beamlines surrounding the concrete pedestal that supports the Target Chamber. The culprit: gravity.

“In the pedestal beams—the lower 16 plus maybe the next 16 beams as well—we believe we’re getting debris from all the other beamlines on NIF and from the NIF targets, just falling down with gravity on the surface of the optics,” Carr said. “When the laser light hits a chunk of debris, it blows up and causes additional damage on those beamlines.” 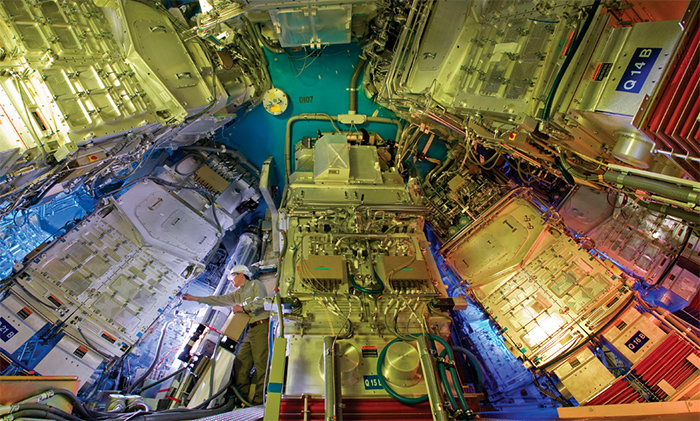 Final optics assemblies attached to the lower hemisphere of the NIF Target Chamber.

While the FSDS was not designed to solve that problem, Carr said tests have shown that with modifications, the FSDS “seems to have dropped the damage by an order of magnitude or so. With a combination of the FSDS and the other patches to limit debris transport, we may have the fix we need for the lower 32 beams.”

However, he said, “I’m just not sure yet whether (FSDSs) are going to be cost-effective in the pedestal without a method of protecting them from the falling debris. We likely need a way to resolve this problem before it will be worthwhile to put them in the lower 16 beams. Until we have a solution for the falling debris, we will work on putting FSDS in the other beams where we know they will have a very high impact.”

Researchers estimate that the FSDS and the other debris-reducing strategies will result in at least a 10-fold improvement in the GDS damage rate. “It doesn’t mean the optics last 10 times longer,” Carr said, “but it does make them last twice as long, which is a big win all by itself.”

Another advantage to reducing the damage rate is that it enables “extended hit lists”: Technicians can investigate and repair essentially all the damaged sites during refurbishment instead of just the worst ones.

“You might have 10,000 damage sites on an unprotected optic—which is a really bad case that does happen from time to time,” Carr said. “But with an FSDS, you’re talking about more like a few hundred damage sites. It takes much less time to find and repair all those sites. When you reinstall that optic, it lasts closer to the lifetime of a new optic, whereas if you only repair the worst damage sites, the optic lasts maybe a quarter as long as it did the first time you installed it.

“Between the optics lasting longer on each installation and being faster to repair, it really adds up to being able to support a higher shot rate.

“On top of that, if you only need to repair a few hundred sites, your optics can survive more trips through the recycle loop. You don’t have to throw an optic away after you use it five or six times; you may be able to use it 10 or 20 times.

“The impact of the FSDS will be further enhanced by these other mitigations and they are expected to do a good job at further reducing damage on the GDS optics—certainly on the equatorial beams, and probably on all 160 beams north of the very bottom,” Carr said.

“We are very pleased with what we’ve accomplished so far,” he said, “and I expect our team can lick the problem with the pedestal as well. If we can do that, this will definitely be a home run.”

Carr noted that dozens of LLNL scientists, engineers, and technicians contributed to the FSDS project. “A large chunk of our success can be laid at the feet of the FSDS Integrated Program Team led by Matt Fisher, Zhi Liao and Nathan Ruiz,” he said, “the All-Microscopy Hit-List Team, led by David Cross, and the Pedestal Damage Debris Team, led by Chris Miller.”