Researchers Use NIF for Deep Dive into Interiors of Red Dwarfs

Red dwarfs are the most abundant stars in the Milky Way, making up 70 percent of all stars.

But the physics of their interiors is not well understood. Heat is generated in the core and travels outward to the surface, but it is not clear whether that process occurs via radiation, convection, or a combination of the two. The key factor determining whether red dwarfs are radiation- or convection-dominated is the opacity of the internal hydrogen.

LLNL researchers using NIF, the world’s largest and most energetic laser, are exploring the opacity of hydrogen under the extreme pressures and relatively low temperatures found in the interior of red dwarfs. The research appears in the journal Physics of Plasmas. 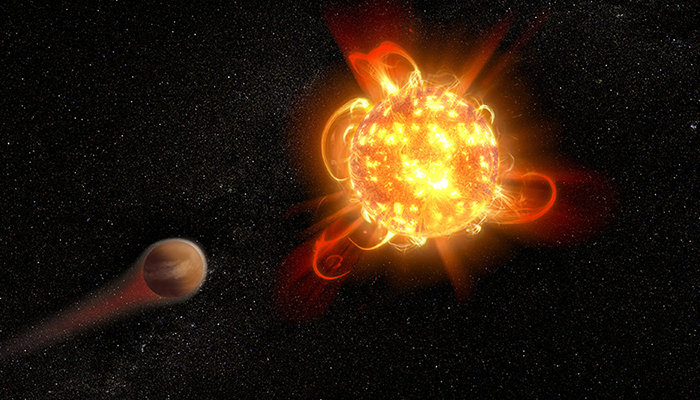 This artist’s illustration shows a red dwarf star orbited by a hypothetical exoplanet. Red dwarfs tend to be magnetically active, displaying gigantic arcing prominences and a wealth of dark sunspots. Red dwarfs also erupt with intense flares that could strip a nearby planet’s atmosphere over time or make the surface inhospitable to life as we know it. Credit: NASA, European Space Agency, and D. Player (Space Telescope Science Institute).

Red dwarfs are very low-mass stars. As a result, they have relatively low pressures, a low fusion rate, and low temperature. The energy generated is the product of nuclear fusion of hydrogen into helium by way of the proton–proton (PP) chain mechanism. These stars emit relatively little light.

In their paper, LLNL scientists and collaborators propose a novel implosion experiment at NIF to measure the opacity of dense hydrogen due to free-free absorption, thought to be the dominant absorption mechanism for that environment. To accomplish this, the implosion velocity is significantly reduced to achieve colder plasma temperatures than required for self-sustaining inertial confinement fusion reactions, and the high-density hydrogen is probed by x-ray radiography.

The smallest red dwarfs are thought to be fully convective. In this case, the fusion reactions in the core are permanently re-fueled by hydrogen from the outer layers. Combined with the low fusion rates due to the relatively low core temperatures, convection possibly allows some red dwarfs to last trillions of years until all hydrogen fuel is spent.

The internal structure of a star has a major impact on the activity of its surface. The boundary between a radiative core and a convective layer can lead to strong magnetic fields and a turbulent atmosphere, including radiative and plasma outbursts that may threaten life on nearby planets.

“But even a small radiative core can strongly change behavior and its existence crucially depends on the effectiveness of radiation transport in highly compressed matter,” said LLNL co-author Tilo Doeppner. “Understanding the radiative properties of the complex plasmas within a host star is crucial when judging the possibility of an exoplanet to host life—especially for red dwarfs where the habitable zone is thought to be found relatively close to the star itself due to the low surface temperature.”

Other LLNL authors include Benjamin Bachman, Laurent Divol, Gareth Hall, Nobuhiko Izumi, Shahab Khan, Otto Landen, Steve MacLaren, Markus Schoelmerich, Phil Sterne, and Clement Trosseille. Dominik Kraus of the University of Rostock and Helmholtz-Zentrum Dresden-Rossendorf, and Mandy Bethkenhagen of Université Lyon serve as the principal investigators of the project. Julian Lüetgert, the lead author of the paper from University of Rostock, just spent a few months in a summer internship at LLNL.

The project is part of the NIF Discovery Science program and the LLNL portion of the work is funded by the Department of Energy.