Researchers Focus on Tantalum’s Strength from Ambient to Extreme Conditions

Researchers from Lawrence Livermore, Los Alamos, and Sandia national laboratories have teamed up to better understand the strength of tantalum using conditions accessed by the National Ignition Facility (NIF) and the Z machine at Sandia.

The work builds from the understanding that tantalum, an important platform development material in the tri-lab community, remains in a single solid phase across the full range of conditions examined. While tantalum is nominally simple, the material still exhibits complexity in how atomic-scale processes manifest strength variability spanning nearly two orders of magnitude.

The research, which is featured in Acta Materialia, focused on answering two questions: Do these diverse experiments provide a coherent picture of strength? And, by integrated analysis of diverse experiments, can researchers advance the theoretical understanding and modeling of strength in extreme conditions? 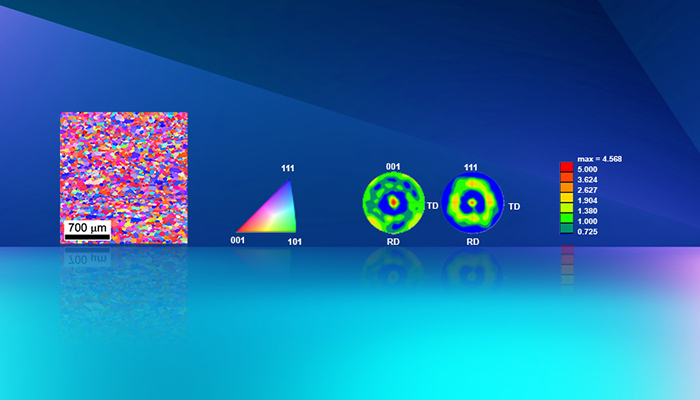 This image shows an Electron Backscatter Diffraction (EBSD) map and pole figures taken through the thickness of a test plate, showing uniform grain size and mild overall preferential alignment of crystallographic axes (known as crystallographic texture). Within the EBSD map, the grains colored red contribute to the <100> fiber texture component and the grains colored blue contribute to the <111> fiber texture. Experiments in the Acta Materiala publication utilized this well-pedigreed material to eliminate variability that could arise from the use of different lots of tantalum material. Credit: Nathan Barton

The researchers used data from seven different types of experiments and compared three independent strength models to explore strength with a novel degree of cross-comparison over a wide span of pressures and strain rates. In this setting, strength refers to the material’s resistance to permanent deformation. That kind of permanent deformation is often discussed in terms of plastic strain.

The speed of the material’s deformation—its rate—also was explored. The rate is inversely related to an experiment’s duration. Experiments with the shortest durations probed the highest strain rates. The NIF experiments accessed the most extreme conditions, with strength data collected over only tens of nanoseconds.

Co-author Nathan Barton, program group leader for Condensed Matter Physics within the Weapons Physics and Design Program at LLNL, said the work is consistent with the big-science missions of the National Nuclear Security Administration (NNSA) laboratories.

“The work critically drew on subject matter expertise from across the labs,” Barton said. “We needed expertise in both the data collection and the relevant analysis techniques for all of the experimental platforms.”

The assembly of the tri-lab team grew out of technical discussions led by Bruce Remington at LLNL, George “Rusty” Gray at LANL, and Dawn Flicker from Sandia. Dana Dattelbaum, who oversees the relevant program area at LANL, described the level of tri-lab collaboration leading to this paper as unprecedented.

In traditional applications, researchers tend to think about the strength of a material as being relatively insensitive to pressure and rate. Looking at the extreme range of conditions accessed on experimental platforms in the NNSA enterprise, researchers see strength variations by nearly two orders of magnitude—from 0.15 gigapascal (GPa) to over 10 GPa. A gigapascal corresponds to roughly 10,000 atmospheres of pressure.

“The unique aspect is the level of understanding that we were able to gain by taking a unified look at data from such a range of experimental platforms,” Barton said. “The work outlined in the paper examines pressures from ambient to over 350 GPa, strain-rates from 10−3 to 108 per second, and temperatures from 148 to 3,800 (degrees) Kelvin.”

The integrated approach helped researchers isolate pressure and rate effects. “While it is gratifying that we could adjust models that are in common use to capture the observations, it is clear that we have more work to do to fully understand and predict material response over such a dramatic range of conditions,” Barton said.

The tri-lab activity outlined in the paper is ongoing and continues to be a valuable vehicle for coordinating the evaluation of data from a variety of experimental platforms, including flagship DOE facilities such as NIF, the Z machine, and the Dynamic Compression Sector at the Advanced Photon Source at Argonne National Laboratory.

The tri-lab team has shifted emphasis to examine the strength of materials that undergo phase transformations, and a level-2 milestone in this area was just completed successfully. Several presentations at an American Physical Society conference this summer will feature aspects of this more recent work, and there will be additional publications from the tri-lab team.

The team looks forward to additional advances that will come as new diagnostic techniques are developed and as more knowledge is gained from multi-scale simulation approaches that build from the use of capability-class computing platforms.