Research conducted at LLNL is taking a closer look at entropy—the measure of internal energy per unit temperature that is unavailable for doing useful work—in inertial confinement fusion (ICF) experiments at NIF. 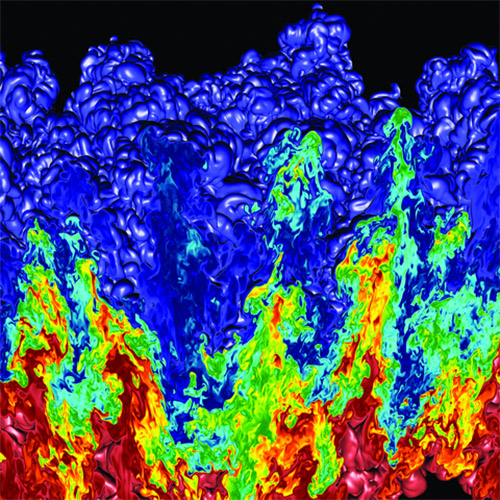 Simulation of Rayleigh-Taylor hydrodynamic instability created on LLNL’s BlueGene/L supercomputer using the MIRANDA code. When fluids or plasmas of different densities, such as the material in an imploding NIF target capsule’s outer layers and the hydrogen fusion fuel inside the capsule, are accelerated together or shocked, they begin to interpenetrate at their boundary, forming “bubbles” and “spikes.” A variety of factors can cause these instabilities.

Work by LLNL physicist Peter Amendt, highlighted as an Editor’s Pick in Physics of Plasma, showed that an added entropy increase (or measure of disorder or randomness) from atomic mixing of hydrogen fuel with high density carbon (diamond) capsule material in ICF experiments at NIF may result in less fuel compression than is simulated with mainline computational tools.

Any shortfall in compression can potentially affect researchers’ ability to demonstrate high fusion energy gain (more than 40 times the energy absorbed by the capsule or five times the maximum laser energy delivered to the hohlraum surrounding the capsule) on NIF (see “How NIF Targets Work”).

Amendt said the transition to a pure mixed state between thermonuclear fuel and diamond ablator material may result in the generation of entropy from atomic species mixing.

“Such an entropy increase limits the amount of internal energy that can be converted to useful mechanical energy for compressing the fuel,” he said. “This process of transitioning from a heterogeneous, unmixed, two-component flow to a fully mixed fluid state is not currently included in mainline simulation tools.”

Sub-grid mix models are widely used in current simulation tools to model the effects of imposed mixing across a hydrodynamically unstable material interface on ICF performance. However, the generation of entropy from mixing during the transition between the states immediately before and after mixing  occurs is generally not included.

Amendt explained the work by citing the classic example of entropy: two vessels of identical gases at different temperatures are separated by a partition that, when removed, allows them to mix until they reach equilibrium. 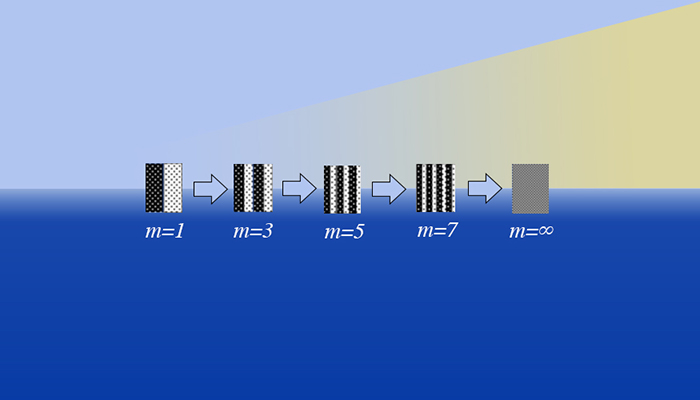 This schematic depicts the process of increasing mix between two species types by successively adding more contiguous and alternating regions of pure materials as a function of partition number m (analogous to the bubble and spike regions in hydrodynamic growth experiments and simulations) leading to a fully mixed state as m=infinity. For each manifestation as depicted in the figure, the regions remain distinct and unmixed, but are further susceptible to transport effects as the number of partitions increases (or region width decreases).

“The change in entropy between the final mixed and initial unmixed states depends on the ratio of initial temperatures,” he said. “Now, consider the case of a partition that is stationary but thermally conducting. Eventually, the two vessels will equilibrate to the same final temperature as in the mixing scenario.”

In the latter case, entropy is generated by conduction through the membrane without any exchange of particles. The generation of entropy via conduction is well-modeled in mainline simulation tools, Amendt said, but the mix-generated processes of temperature equilibration can add further to the degree of unwanted entropy production in an ICF implosion.

Amendt said the work may shed light on how to routinely incorporate the entropy of mixing in mainline design codes.

“Such a capability may establish the role of entropy generation from mixing in degraded fuel compressions that are experimentally inferred,” he said.