Discovery Science on NIF: Exploring the Physics of Star Formation

For the past several years, astronomers at the University of Maryland and theorists and experimentalists at LLNL have investigated the origin and dynamics of star-forming structures such as the famous “Pillars of Creation” in the Eagle Nebula 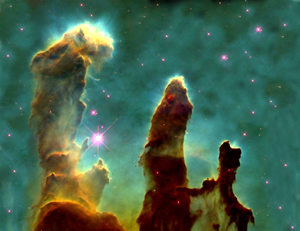 The iconic 1995 image of star-forming pillars in the Eagle Nebula captured by the Hubble Space Telescope. The largest pillar is one parsec (about 19 trillion miles) high. Credit: NASA, Jeff Hester, and Paul Scowen (Arizona State University). and similar structures at the boundaries of H II regions (emission nebulae) and molecular clouds (low-density clouds of partially ionized gas and dust).

In an April 30 High Energy Density Science Seminar, “Dynamics of Molecular Clouds: Observations, Simulations, and NIF Experiments,” Marc Pound of the University of Maryland reviewed theories of how molecular pillars may form and presented results from recent observations and numerical simulations; and Jave Kane of LLNL described scaled Eagle Nebula experiments designed to recreate the pillars in miniature inside the NIF Target Chamber—one of several discovery science campaigns currently being conducted on NIF.

The NIF laser will be used to create an intense star-like source that will illuminate a nebula-like target, creating tenuous “rocket” plumes of material. The goals are to discover whether the pillars may be formed from a dense cloud core, resembling the head of a comet, with accelerating matter stretched out like a comet’s wispy tail, or might instead be caused by more exotic, theorized nonlinear instabilities that could explain star formation in the pillars.

Kane discussed NIF experiments that will generate “cometary” structures and presented results from experiments on the OMEGA EP laser system at the University of Rochester that validated the experimental concepts to be used in the NIF experiments. They include a 30-nanosecond, multi-hohlraum x-ray drive and a “NIF Science Eagle” package with dense clumps in foam, stood off from the hohlraum source so it is illuminated by directional radiation.

“The experimental foundation has been laid” for the NIF experiments, Kane said. 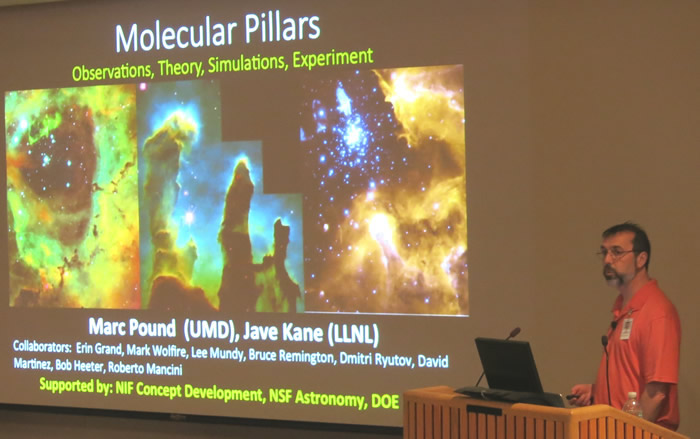 Marc Pound introduces his presentation on theories of star formation.

Article on MOIRE Optics on Cover of Applied Optics

A paper by LLNL researchers and collaborators describing the optics technology being developed for the Defense Advanced Research Projects Agency (DARPA)’s Membrane Optical Imager Real-time Exploitation (MOIRE) program is the cover article in the April 10 issue of Applied Optics. 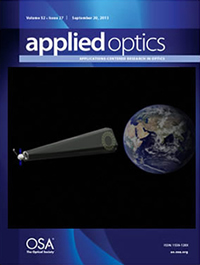 The researchers have demonstrated 4-level Fresnel zone lenses (FZLs) in glass with a minimum linewidth of one micron, using a commercial laser photoplotter with overlay writing capability and ion-beam etching for pattern transfer.

Lead author Jerry Britten was joined on the paper by LLNL colleague Sham Dixit and by collaborators from Advance Reproductions Corp. of Andover, Mass., NeXolve Corp. of Huntsville, Ala., and Ball Aerospace and Technologies Corp. of Boulder, Colo. 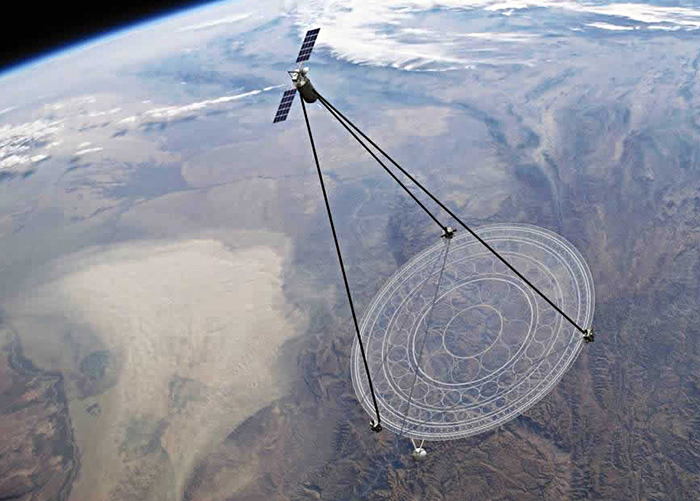 Upon arrival in orbit, the MOIRE spacecraft would deploy solar arrays and then unfurl a micrometer-thin diffractive optic membrane to form a massive segmented light collection lens. (Credit: DARPA) 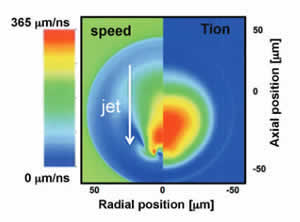 Simulations show that drive asymmetry drives a strong jet of low-density fuel through the central hot spot. The kinetic energy stored in the jet represents lost internal energy in the hot spot. The jet damages the implosion and alters the ion temperature (Tion) distribution (shown here varying from 300 to 4,000 electron volts).

In a Physics of Plasmas paper published online on April 9, LLNL researchers and colleagues reported that numerical simulations of implosions with mode 1 asymmetry show that the resulting simulated diagnostic signatures are moved toward the values observed in many lower-yield NIF experiments. The diagnostic output can be used to build a set of integrated implosion performance metrics. The metrics indicate that this asymmetry has a significant impact on implosion performance and must be carefully controlled in NIF implosions.

Further development of the ability to detect and understand mode 1 perturbations is under way at NIF. Diagnostics are being examined for their capability to measure the effects of asymmetries and other diagnostics and experimental platforms are being modified to enhance their relevance for mode 1detection. NIF also has fielded a set of experiments meant to test directly the effects of drive asymmetry on implosions.