After more than a year of intense effort, the NIF&PS Team, working with LLNL leadership, has been awarded approximately $50 million to help build a next-generation laser project for the Czech Republic. The LLNL-designed High Repetition-rate Advanced Petawatt Laser System (HAPLS) is part of the multinational European Extreme Light Infrastructure (ELI).

Based on the groundbreaking "E23" laser technology developed by NIF&PS over the past few years, HAPLS will be capable of reaching peak powers greater than one petawatt (one quadrillion, or 1015 watts) at a repetition rate of 10 Hz. The system will use laser diodes first developed in the NIF&PS directorate, an advanced laser architecture, and gas cooling techniques for both the laser slabs and the frequency doubler. LLNL also will provide gratings for the pulse compressor that the Czechs will develop. 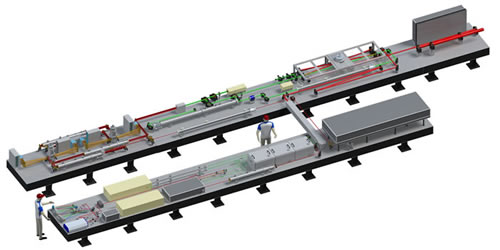 "We were selected as the only institution capable of supplying this technology, following a worldwide competitive assessment process by the Europeans," said Ed Moses, leader of LLNL's fusion ignition science and applications research effort. "This is a great honor and a testament to our world-leading expertise in laser design, development and operation, along with our track record of successful project delivery.

"The E23-HAPLS project is of strategic importance to laser-based developments at LLNL," Moses added, "and acts as a technology platform for next-generation activities across many of our programs." 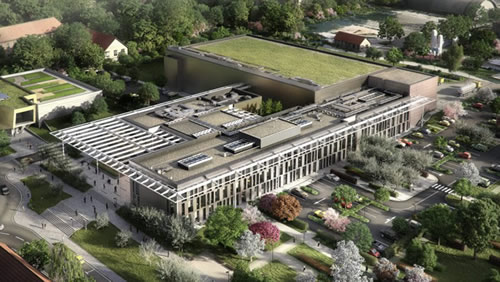 Artist's rendering of the ELI Beamlines facility, now under construction near Prague in the Czech Republic.

A number of LLNL researchers helped organize and gave presentations at the Sept. 8-13 International Conference on Inertial Fusion Sciences and Applications (IFSA 2013). The conference brought together scientists in the fields of inertial fusion sciences, high energy density (HED) physics, and related applications. IFSA 2013 was co-chaired by Ed Moses, while LLNL Deputy Director for Science and Technology Bill Goldstein served as an organizing co-chair and LLNL's Bruce Hammel was co-chair of the Technical Program Committee.

In a Sept. 9 keynote address, Moses noted that NIF has transitioned to a user facility supporting ignition, HED physics, national security, and fundamental science and applications. The facility has more than 65 diagnostic systems in operation and has shown flexibility in laser pulse shape and performance to meet the requirements of its multiple users.

New experimental platforms are being developed for HED and fundamental science experiments including equation of state, material strength, radiation transport, hydrodynamic instabilities, and direct-drive implosions. Moses said improvements in laser performance such as improved optics damage performance and back-reflection control could result in NIF increasing its energy to more than three megajoules and more than 750 terawatts of power.

Moses' address was followed by a plenary talk by John Edwards describing the recent theoretical and experimental effort that has focused on understanding the underlying physics issues responsible for the deviation of NIF's experimental results from modeled performance. Edwards provided an overview of the current progress of the x-ray drive inertial confinement fusion program and described the results of studies aimed at understanding and controlling the low-mode shape and mix in NIF implosions. He also discussed how these results are influencing the direction of the experimental program. 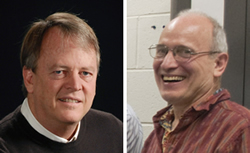 Other LLNL plenary speakers and their topics were: Debbie Callahan, the NIF Drive Campaign; Harry Robey, advances in NIF shock timing experiments; Dave Bradley, understanding the evolution of low-mode density and shape asymmetries throughout the ignition drive; Bruce Remington, hydrodynamic instabilities and hot spot mix in the NIF Ignition Campaign; and Hye-Sook Park, laboratory astrophysical collisionless shock experiments on NIF and the OMEGA Laser at the University of Rochester.

At the meeting, LLNL Distinguished Technical Staff member James Hammer and NIF affiliate Richard Petrasso of the MIT Plasma Science and Fusion Center were awarded 2013 Edward Teller Medals. Sponsored by the American Nuclear Society, the medals are given in recognition of pioneering research and leadership in the use of lasers, ion-particle beams or other high intensity drivers to produce unique high-density matter for scientific research and to conduct investigations of inertial fusion.

A comprehensive analysis of laser-plasma interaction (LPI) data from the first complete series of coupling experiments in ignition-scale hohlraums on NIF not only indicates that plasma instabilities could be controlled to maximize coupling, but also shows that they can be beneficial in controlling drive symmetry via precise adjustments in the wavelengths of the different beams.

In a Plasma Physics and Controlled Fusion paper published online Sept. 12, lead author Robert Kirkwood and LLNL and Los Alamos National Laboratory colleagues said that an understanding of the initial hohlraum coupling experiments is critical, as they are the first step in a campaign to study indirectly driven implosions under the conditions of ignition by inertial confinement at NIF, and in the near future are likely to further influence ignition plans and experimental designs.

The researchers said the advent of experiments with ignition-scale hohlraums and laser energies up to 1.3 megajoules at NIF "has provided a substantial advance in our understanding of the effects of plasmas on hohlraum coupling and has given us a demonstration that hohlraums can produce x-ray drive with the intensity and uniformity that is needed to implode capsules at the scale expected to be necessary to ignite fusion reactions. The understanding is also a critical component in the worldwide effort to produce a fusion energy source with a laser."

Many NIF targets are experimental and involve tasks that can be performed only at LLNL. NNSA, however, is interested in exploring if some of the more standard targets, target subcomponents or target preparation processes could be performed by other contractors or subcontractors.

"We need the best ideas we can get from industry on how to make targets using novel materials, precision manufacturing and metrology, and the best process control that industry can provide for affordability, precision and adaptability," said Roger Lewis, acting Assistant Deputy Administrator for Research, Development, Test Capabilities and Evaluation for NNSA. "Tomorrow's targets are not going to be today's targets."

A presentation on closing the fusion fuel cycle by Susana Reyes and colleagues described the design of an IFE fuel cycle, including the technology challenges and a proposed development pathway.

Other lead presenters and their topics included:

Very-short-pulse laser sources (in the range of picoseconds to femtoseconds) with ultrahigh repetition rates (100 megahertz to tens of gigahertz) have applications as drivers of short-wavelength, high-energy photon sources and in high-frequency particle accelerators. Other applications include materials processing, three-dimensional lithography, high-data-rate laser communication, and remote sensing systems.

In a paper in the September issue of Optics Letters, LLNL researchers reported on the development of a unique 11-gigahertz fiber laser system built on a modulated continuous-wave platform. The compact, vibration-insensitive system can be operated at wavelengths compatible with high-energy fiber technology. The system is driven by an RF (radio frequency) signal directly and is tunable over a wide range of drive frequencies.

"We believe this technique may lead to a new class of oscillators with extremely high repetition rates…that provide an extremely stable and robust alternative to conventional mode-locked oscillators," the researchers said. First author Matthew Prantil was joined by LLNL colleagues Jay Dawson, David Gibson, Michael Messerly, and Chris Barty and by Eric Cormier of the University of Bordeaux in France.

The NIF Tritium Processing System (TPS) captures virtually all of the tritium used at NIF. NIF strives to ensure that hazardous releases are "as low as reasonably achievable," a policy known as ALARA. "The TPS system helps us deliver on this commitment," said NIF Radiological Operations Manager Ken Kasper.

In addition to having a highly effective processing system, NIF has optimized the way TPS is operated. When NIF started using tritium, the TPS vessels were considered disposable. "But at a cost of about $20,000 per vessel," Kasper said, "we were motivated to look at a recycling potential. Now, the vessels we have are in a continuous recycle loop. The tritium-capturing mole sieve beads are removed and replaced after they are no longer useable." 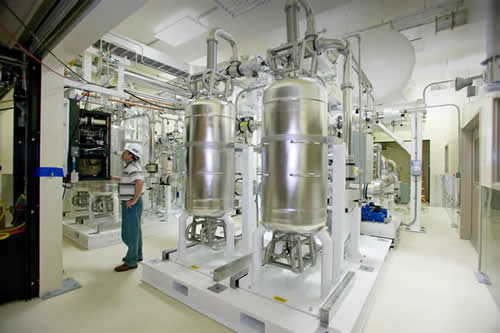 Although NIF uses very small amounts of tritium in its targets, a state-of-the-art tritium processing system has been installed to contain this material and provide a mechanism for its safe disposal. A filter system extracts tritium from the air that has entered the Target Chamber and deposits it into containers for safe removal. Material that is removed from the Target Chamber is cleaned of any contaminants and safely disposed of to appropriate off-site facilities.

Kasper said NIF has teamed with the Laboratory's Radioactive & Hazardous Waste Management (RHWM) organization to make this a reality. When the recycling began, NIF was limited to 100 curies per vessel for worker safety reasons. NIF worked with Environment, Safety and Health and RHWM to purchase a special device to minimize the hazard to RHWM workers. As a result, NIF now can direct up to 1,000 curies to a single vessel, substantially increasing the useful life of the vessel and reducing the effort associated with frequent exchanges.

"More than 20 vessels would have been needed to collect the tritium on NIF's last four vessels, if we had stayed with our original process," Kasper said. The vessel recycling and infrequent exchanges has generated savings of more than $300,000 a year. 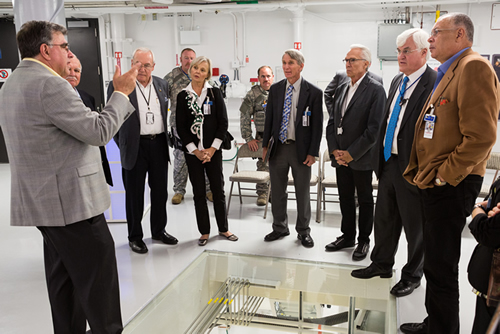 NIF&PS Principal Associate Director Ed Moses (left) briefs members of the UC Board of Regents during a Sept. 19 tour of NIF. The Regents held a public meeting at the Livermore Valley Open Campus’ High Performance Computing and Innovation Center to showcase LLNL’s research and development capabilities to the public and key stakeholders. The Regents also toured the National Atmospheric Release Advisory Center and the Terascale Simulation Facility. 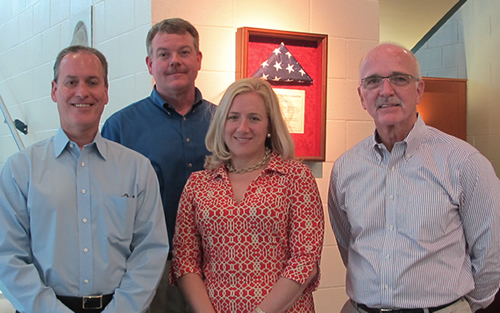 Members of the DOE/NNSA Operations Council toured NIF during their Sept. 17-18 meeting at the Laboratory. Left to right: Dennis Donati of the DOE Savannah River Site, John Woolery of the B&W Pantex Plant, Summer Jones of NNSA , and Chuck Spencer of the B&W Y-12 National Security Complex.

A team of visitors from the Advanced Research Projects Agency-Energy (ARPA-E) visited LLNL Sept. 4 to see NIF and obtain information about the status of NIF ignition and its implications for inertial fusion energy (IFE). The team received a NIF tour and briefings on NIF ignition and IFE. Participating in the tour were (from left) Dave Rardin and Mike Dunne of NIF&PS, William Regan, Colleen Nehl, Patrick McGrath, and Francis Thio of ARPA-E, Chris Keane of NIF&PS, and Don Correll of Physical and Life Sciences.