Ed Moses Announces His Next Challenge

At the conclusion of his quarterly All-Hands meetings on Oct. 1, Ed Moses, NIF&PS Principal Associate Director since 2005, announced that he has accepted a new assignment to lead a two-year effort to explore the science and applications of ignition, including the commercial prospects for laser inertial fusion energy.

After reviewing recent NIF&PS accomplishments, including the progress in NIF's drive to reach higher levels of alpha heating and neutron yield, Moses said NIF has "turned the corner toward fusion ignition," and the next Grand Challenge will be to apply what NIF has accomplished to the development of fusion energy "soon enough to make a difference" in meeting the world's energy needs. "I feel it is my responsibility to move on to this new challenge," Moses said. 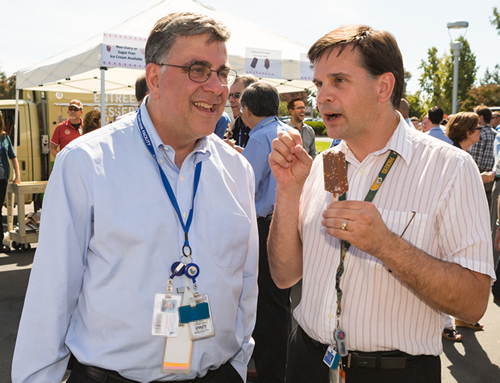 His announcement was followed by words of appreciation for his leadership of NIF&PS from LLNL Deputy Director for Science & Technology Bill Goldstein on behalf of LLNL Director Parney Albright. Goldstein praised Moses for his success in transitioning NIF from a construction project to "a huge mega-physics experiment, to being a user facility serving customers around the world." University of California Vice President of Laboratory Management Glenn Mara, speaking on behalf of the LLNS Board of Governors and the University, said Moses has "pulled off miracles, and he's the one we're backing for the next miracle."

NIF&PS Principal Deputy Director Jeff Wisoff, who was named acting PAD, said Moses "never doubted that the team could accomplish its goals," and now will "put forth the vision to take advantage of ignition" on NIF.

Maximizing the laser-to-x-ray conversion efficiency and tuning the spectral content of the x-ray source are crucial to satisfying the requirements of any backlighter or material interaction application. In a Physical Review E paper published last month, LLNL researchers reported on a demonstration of a significant enhancement of laser-to-x-ray conversion efficiency at 13 keV from krypton (Kr)-gas-filled targets and a record for both the flux and total energy emitted by a 13-keV source.

Experiments on NIF using about 25 times more laser energy than previous experiments have created near-optimal conditions for Kr K-shell x-ray emission, the researchers reported. The experiments demonstrated that the x-ray environment generated on NIF with a Kr-gas-filled target irradiated with 0.7 megajoules of laser energy achieves a laser-to-x-ray conversion efficiency into Kr K-shell emission that is an order-of-magnitude greater than the results of similar experiments on the OMEGA laser at the University of Rochester (UR). 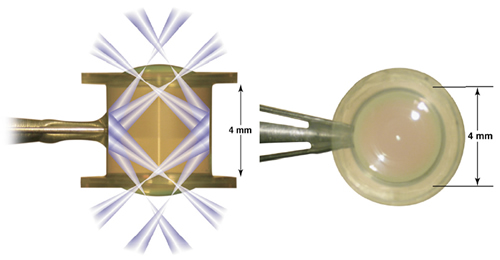 Side-on (left) and face-on views of the thin-walled gas pipes used as x-ray source targets in the NIF experiments, illustrating how the laser beams were pointed with respect to the target’s axis and laser entrance holes. The targets are designed to transmit x rays with energies greater than 3 keV. 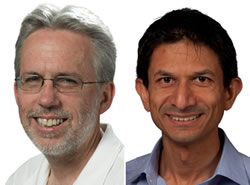 LLNL's John Moody and Pravesh Patel have been named Fellows of the American Physical Society (APS). Both were nominated for the distinction by the APS Division of Plasma Physics.

Moody was honored for "pioneering experiments contributing to understanding propagation, scattering, transmission and redirection of high-intensity laser beams in large scale plasmas for Inertial Confinement Fusion." Patel was cited for "pioneering contributions in the science of ultraintense laser-matter interaction and particle acceleration and applications to creating and probing high energy density plasma states, and for his leadership in advancing the fast ignition concept for inertial confinement fusion."

The Laboratory was co-sponsor and host for the 14th International Conference on Accelerator & Large Experimental Physics Control Systems (ICALEPCS 2013) held on Oct. 6-11. ICALEPCS is a biennial series of conferences inaugurated in 1987 by control system specialists from accelerator laboratories around the world to facilitate the interchange of ideas and information. 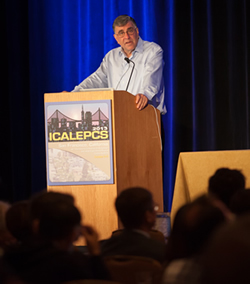 Conference attendees were given the opportunity to tour NIF on Oct. 9. 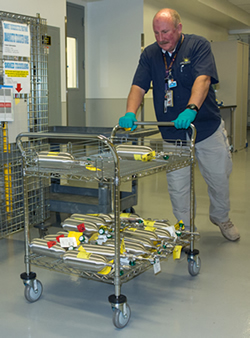 Hazardous Material Management Area Contamination Manager Steve Moyle delivers empty target gas reservoir bottles to the Operations Support Building to be held until they are recycled in Bldg. 298. The recycling program developed between the two facilities saves the $2,000-per-bottle replacement cost as well as the complex handling and processing efforts of disposal.

The "Best in Class" award to NIF&PS, one of three awards received by LLNL this year, recognizes program improvements implemented by the NIF Rad Ops Team that have significantly reduced low-level radiological waste generation, product use and costs and time spent managing hazards.

When NIF introduced radioactive fuel (tritium) to the facility in September 2010, hazard management protocols were extremely conservative. As the program progressed, NIF collected data from more than 10,000 surveys to verify the effectiveness of engineering controls. With a better understanding of radiological risks and refinement of employee skills, NIF was able to identify and implement several program adjustments to right-size safety protocols with actual hazards to improve overall operational efficiency. This "active risk management" approach resulted in a reduction of an estimated 12,240 cubic feet of radiological waste per year, $1.3 million in consumables and 40,000 person-hours per year of time spent managing NIF hazards.

NIF&PS Chief Technology Officer Chris Barty presented his first two talks as a 2013-14 IEEE Photonics Society Distinguished Lecturer on Oct. 24 to the society's Ottawa chapter. The audience included both the local professional chapter and the student chapter at the University of Ottawa.

The society's Distinguished Lecturer Awards honor excellent speakers who have made technical, industrial or entrepreneurial contributions of high quality to the field of lasers and electro-optics; award winners agree to give a minimum of six lectures at society chapters. Barty's lectures, part of a symposium on recent advances in photonics, were titled, "NIF and the Pursuit of Star Power on Earth," and "Extreme Gamma-ray Sources and the Dawn of Nuclear Photonics."

The symposium also included an update on attosecond (one-quintillionth of a second) research at the National Research Council of Canada by Paul Corkum, director of the NRC’s attosecond science program.

Chris Barty at the Ottawa Chapter of the IEEE Photonics Society.

A new high-speed solid-state framing camera that can operate over a wide range of photon energies was described by LLNL researchers in an Applied Physics Letters paper published online on Oct. 10. The camera measures the two-dimensional spatial profile of the flux incident on a cadmium selenide semiconductor at multiple times. The multi-frame camera has been tested at 3.1 eV and 4.5 keV.

Unlike previous cameras based on microchannel plate technology, the device uses all-optical and solid-state components to accomplish the functions of a framing camera. Advantages to this approach include higher spatial resolution, temporal resolution approaching 100 femtoseconds, potentially higher dynamic range, and the ability to operate in a high-neutron-flux environment.

The framing camera currently records two frames with a temporal separation between the frames of five picoseconds. However, this separation can be varied between hundreds of femtoseconds up to nanoseconds, and the number of frames can be increased by angularly multiplexing the probe beam onto the cadmium selenide semiconductor.

A number of LLNL volunteers gave presentations and conducted workshops at the Oct. 5 San Joaquin Expanding Your Horizons (EYH) Conference. The conference was co-sponsored by Lawrence Livermore National Security, LLC (LLNS), Sandia National Laboratories, and the University of the Pacific School of Engineering and Computer Science.

EYH conferences introduce young women in grades 6 through 12 to a variety of diverse and challenging careers and encourage their interest in science and mathematics.

Among the workshops were "Ubiquitous Electronics," hosted by Mike Taranowski of Laser Systems Engineering Operations, and "Talking at the Speed of Light," with Chris Ebbers of NIF&PS and Physics and Life Science's Melissa Santala. In "Ubiquitous Electronics," the students assembled, soldered, and tested a circuit board consisting of LEDs, resistors, and a small controller, while learning the components' function. These concepts were reinforced in "Talking at the Speed of Light": the young women assembled a light-based communication system, the backbone of existing telecommunication systems.

(Above) Vanessa Martinez (second from left), niece of EYH volunteer Gloria Martinez, and her fellow students watch the "Talking at the Speed of Light" presentation by Chris Ebbers of NIF&PS (below) at the Oct. 5 Exploring Your Horizons conference.

In a workshop on "Terrific Telescopes" by Stacie Manuel and Kerry Krauter of NIF&PS and Carol Meyers of Computational Engineering, the students set up lenses to measure focal lengths and learn about imaging and built small telescopes that they were able to take home, courtesy of SPIE. A workshop led by Bill Taylor of Computer Systems Support gave the young women an opportunity to learn the parts of a computer and then remove and reinstall most of the components. 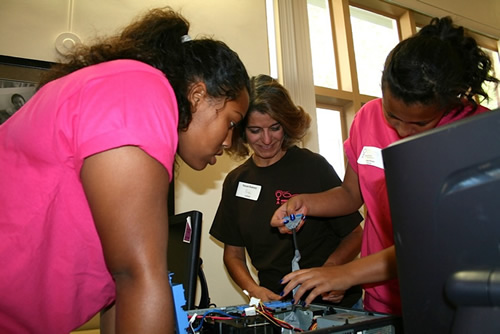 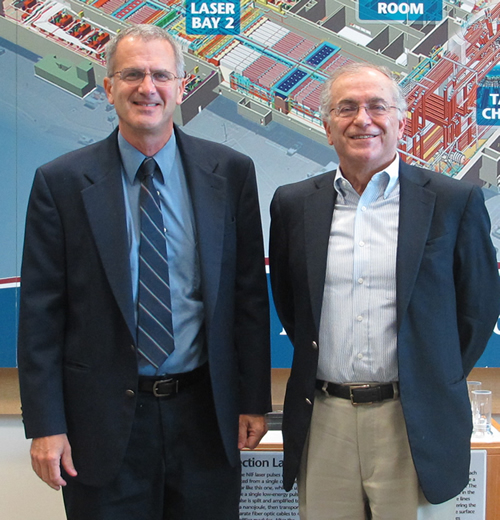 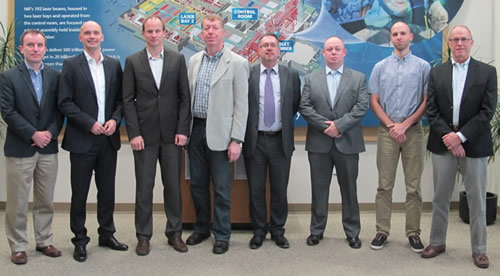 Members of the team from the Czech Republic who will collaborate with LLNL researchers to develop the High Repetition-rate Advanced Petawatt Laser System (HAPLS) at the Laboratory toured NIF on Oct. 15. The $45-million-plus project is based on the groundbreaking "E23" laser technology developed by NIF&PS over the past few years. HAPLS will be capable of reaching peak powers greater than one petawatt (one quadrillion, or 1015watts) at a repetition rate of 10 Hz (see the September Photons & Fusion). Shown left to right are Mike Dunne (LLNL), Roman Hvezda, Constantin Haefner (LLNL), Bedrich Rus, Alan Sneddon, Neill Whittaker, Jiri Thoma, and Chris Gates (LLNL).