are significantly more robust against ablator instability growth, and they modestly reduce implosion convergence ratio. They also produce record low levels of inferred mixing of capsule material with the fuel as well as excellent agreement with one-dimensional implosion models.

The high-foot campaign began in March as part of an effort to study the effects of hydrodynamic instabilities, possibly caused by imperfections on the surface of the target capsule. Characteristics of the high-foot shots include a higher-power initial laser pulse, a 15-nanosecond pulse (instead of the 20-nanosecond pulses in previous "low-foot" shots), lower peak power, and three main shocks instead of four.

Hurricane said the Sept. 27 high-foot shot resulted in about 5.1 × 1015 total neutrons (4.4 × 1015 measured) and about 14,000 joules of energy – almost 75 percent more than NIF's previous record. A subsequent high-foot experiment on Nov. 19-20 produced an even higher measured neutron yield of 5.3 × 1015 (see the November 2013 NIF status Update). The technique "gives up on theoretical high gain in an inertial confinement fusion (ICF) implosion in order to obtain better control of the implosion and bring experimental performance in line with calculated performance, yet keeps the absolute capsule performance relatively high," Hurricane said.

Next steps in the campaign include exploring higher implosion speeds to increase performance, including using the high-foot approach with HDC and beryllium ablators, thinner plastic ablators, and different hohlraum configurations, Hurricane said.

Also speaking at the indirect-drive session and their topics were John Moody, the hohlraum drive campaign on NIF; Vladimir Smalyuk, hydrodynamic instability and mix experiments at NIF; and Richard Pj Town, dynamic symmetry of indirectly driven ICF capsules on NIF.

Other invited speakers from the Laboratory at the meeting were:

LLNL researchers and collaborators from the French Alternative Energies and Atomic Energy Commission (CEA) met at the Laboratory on Nov. 18-20 to review and analyze the results of recent experiments on NIF and the OMEGA Laser at the University of Rochester.

Jean-Paul Leidinger of CEA discusses the results of a rugby hohlraum experiment.

The workshop's first day was devoted to studying the data from the Oct. 11 NIF experiment using a rugby-shaped hohlraum. Hohlraums shaped roughly like rugby balls are being tested on NIF and at laser facilities in France; the NIF experiments are designed to determine if they can improve the coupling of laser energy to hohlraum x-ray drive on the target capsule.

On Nov. 19, the researchers discussed the results of recent NIF keyhole and high-foot campaigns, the use of high-density carbon (HDC) ablators and vacuum hohlraums, recent gold sphere and x-ray conversion experiments on OMEGA, and "prepulse" measurements on NIF.

Discussions during the Nov. 20 session focused on the design of an experiment to test LLNL and CEA hypotheses regarding rugby-shaped hohlraums, what the rugby results may reveal about how to improve traditional cylindrical hohlraums, and comparisons of different analyses of the effects of laser-plasma interactions.

The workshop was organized by Erik Storm of NIF&PS; attending from CEA were Pascal Gauthier, Paul-Edouard Masson, Jean-Paul Leidinger, and Olivier Poujade.

The teams that developed the NIF high-foot campaign and high-density carbon capsules were recognized with Director's 2013 Science & Technology Awards on Nov. 21. The awards were presented by LLNL Deputy Director for Science & Technology Bill Goldstein, who said, "These awards recognize the exceptional science and technology produced by the Lab's workforce."

The High-Foot Team developed the three-shock, high-foot laser drive campaign that has achieved the highest-energy-yield NIF shots to date. The campaign's purpose is to obtain better implosion control and produce results that are in line with calculated performance. The team's work has made a significant contribution toward the goal of understanding the complex physical phenomena involved in inertial confinement fusion (ICF). 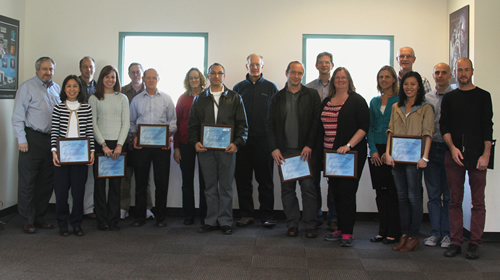 Bill Goldstein (left) with members of the high-foot team. 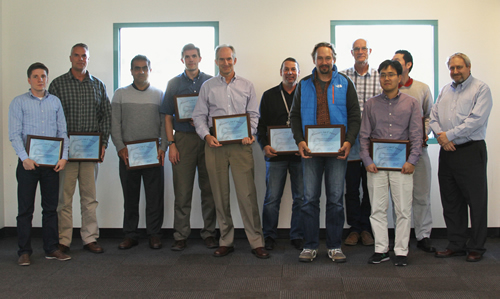 On Nov.19, Dr. James Truchard, president, CEO, and cofounder of National Instruments (NI), presented Mike Flegel, team lead of the NIF&PS Lab Systems Team, with a certificate designating the team as a "LabVIEW Center of Excellence." This designation, awarded to only a few organizations in the United States, recognizes organizations that follow best practices and holds them up as a model to other organizations. 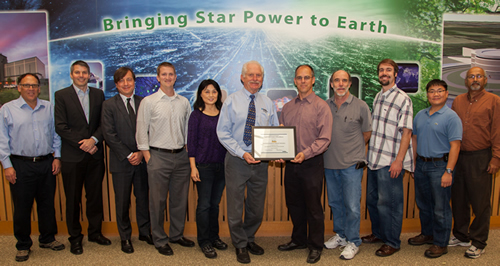 Photo of the Month 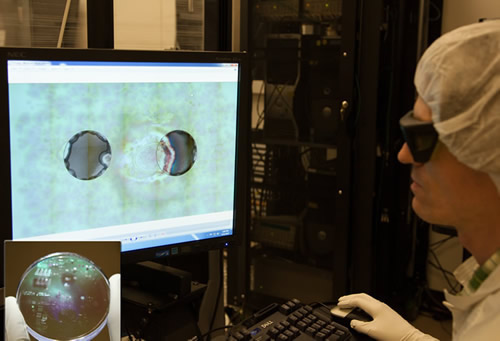 Laser and Electronic Optics Technician Gabe Guss performs a damage inspection of circular mirror test sites created by a femtosecond (one-quadrillionth of a second) laser mitigation protocol after their exposure to very high fluence (energy per unit area) 1ω (infrared) light in LLNL's Zeus damage test facility in Bldg. 165. The sites have withstood fluences greater than 35 joules per square centimeter, as shown in the inset at bottom left by the intact coating at the site-coating interface. These results are promising for a future NIF transport mirror damage mitigation process.