NIF is continuously enhancing its ability to field new experiments through broad improvements in operational efficiency. In order to increase NIF's shot rate and reduce operations costs, the NIF Team is working to shorten the time it takes to conduct shots, increase the availability of the laser systems, and make operations processes more efficient. "Operational efficiency improvement is an attitude that is encouraged and tracked at every level of the organization," said NIF Operations Manager Bruno Van Wonterghem.

A remarkable example of this effort is the work of the NIF Radiological Operations group. "As engineering controls proved to be effective and personnel skills were honed, confidence in our ability to effectively manage radiation hazards has matured," said Radiological Operations Manager Ken Kasper. "Based on well-characterized hazards from more than 100,000 measurements, the entire program evolved to right-size the safety protocols with the actual hazard – with a strong bias toward operational efficiency." 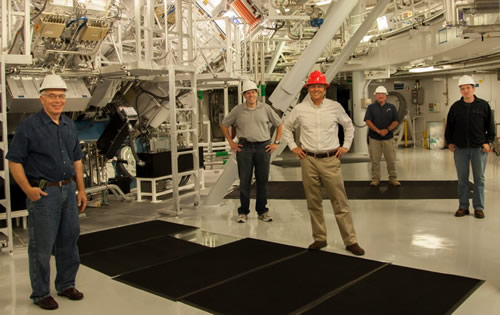 The engine driving the "right-sizing" and other improvements has been the NIF Rad Ops Working Group, which is largely comprised of the workers shouldering the burden of radiological controls. The team of NIF and Environmental Safety and Health physicists and others (known as the Rad Con Steering Committee) considers problems forwarded by the Rad Ops Working Group, then works creatively to craft solutions. "This has often meant scrutinizing LLNL-imposed requirements that were ill-fitted to NIF's hazards," Kasper said. "Over time, the LLNL Rad Con Manager has granted many exemptions to requirements that didn't make sense for NIF or when NIF could demonstrate that compensatory measures were in place."

This has allowed NIF to literally "break down the barriers," he said. Dozens of burdensome contamination zones at NIF have now been removed and replaced with operationally efficient buffer zones. A long list of tasks that had been done with head-to-toe protective clothing now require only a pair of gloves. Critical systems, including ventilation and high-vacuum pumping systems, are now better utilized allowing NIF to move quickly from one shot to the next.

NIF also is creating significant benefits from recycling. Tritium processing vessels costing $40,000 each that contain the media used to capture NIF's tritium had been thrown away. Now the media is disposed of but the vessels are continuously reused. Recycling processes also are being developed for target gas bottles ($4,000 each) and target components (about $10,000 per target). These efforts are expected to save NIF about $750,000 annually on consumable costs and result in reduced volumes of radioactive waste. "We look closely at every waste stream to determine if recycling should be considered," Kasper said.

In all, Kasper said the wide variety of changes has trimmed as much as 16 hours from the time between shots and saved 40,000 person-hours annually in the level of effort needed to manage radiological hazards – equivalent to an annual cost savings of about $6 million. In addition, the direct cost of consumables for radiation protection has been reduced by more than $1.3 million. Waste manager Steve Moyle noted, "At our peak in waste generation, we completely filled a transportainer (truck load) with radioactive waste in 20 days. Our latest transportainer lasted 84 days, which is a record for NIF – a matter in which we take great pride." Moyle and his team are working to extend that period to 90 days. 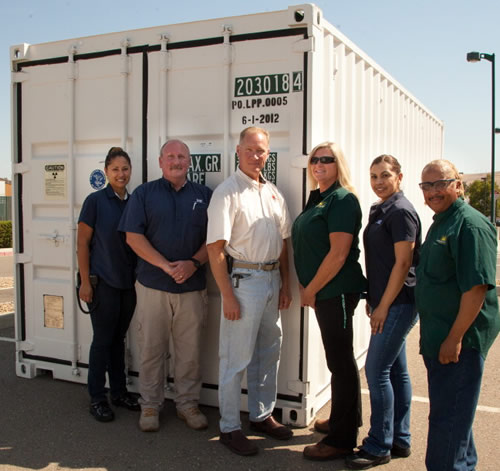 "Just about every week we find something we can make a significant improvement on," said NIF Radiation Safety Officer Richard Beale. "We just finished revising our Rad Worker Training Program, reducing the training time by about one-third. Most of the tasks at NIF are routine and fit nicely into 'bins' in terms of hazard control. As such, we are restructuring our Rad Work Permit process to reduce the number and complexity of our permits." Added Beale, "Speaking for the entire Rad Ops Team, we are thrilled to be part of NIF and consider this our contribution to the next great scientific breakthroughs that will occur at NIF."

A number of LLNL researchers and colleagues gave presentations on techniques being used to polish and mitigate damage of NIF optics at the June 2-7 Pacific Rim Conference on Ceramic and Glass Technology.

In a presentation titled, "Convergent Pad Polishing of Glass Optics," LLNL's Tayyab Suratwala and colleagues described a new method of optical polishing termed "convergent polishing" for improving the polishing and finishing of optics for NIF.

Photos of the convergent polishing setups for (a) round and (b) square work pieces with accompanying pad wear compensating septums.

A second presentation by Suratwala and colleagues entitled, "Microscopic Interactions During Optical Pad Polishing," discussed the use of various ceria and colloidal silica polishing slurries to polish fused silica work pieces on a polyurethane pad. Other presentations included:

Laser-induced damage sites can limit the operational lifetime of NIF optics by interacting with the laser light as it passes through the optics. A number of parameters affect the rate at which damage sites grow, including laser fluence, pulse duration, and wavelength, as well as site morphology.

In a paper published in the June 1 issue of Optical Materials Express, LLNL researchers report on the effects of oven anneal (heat treatment) on the lateral growth rate of both small (as-initiated, less than 50-micron-diameter) and large (grown, more than100-micron-diameter) damage sites in fused silica.

They said the growth rate of initiated damage sites subjected to isothermal annealing at 1100°C for 12 hours was significantly lower than that for untreated sites. The reduction in growth rate was more substantial for small sites than for large sites. 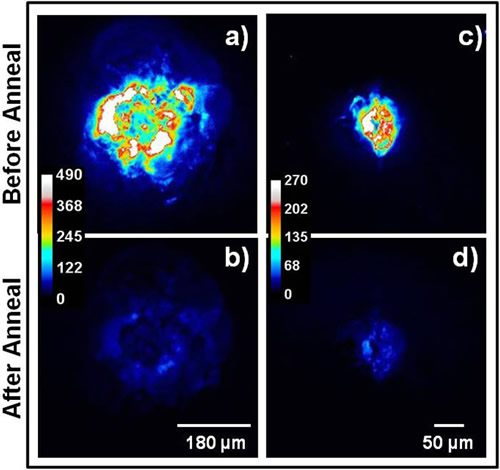 The researchers said the decrease in growth rate was associated with the closure of small surface and subsurface cracks, suggesting that aggressive growth rate is due, at least in part, to subsurface fracture complexity. The researchers concluded that the large sites contained cracks too wide to heal under the reported protocol: "residual fractures render these sites structurally weaker than small sites and thus prone to larger growth events," they said. "At even higher temperatures it is expected that the material will relax under capillary flow, fusing these wider cracks."

LLNL researchers participated in a special symposium on June 12 at the Conference on Lasers and Electro-Optics (CLEO: 2013).

Organized by LLNL's Constantin Haefner, the symposium, "The Path to Sustainable Energy: Laser-Driven Inertial Fusion Energy," reviewed the physics of laser-driven IFE; the technology of solid-state IFE drive lasers; various optical, x-ray, and nuclear diagnostics; IFE target design and fabrication; and the prospect and technology challenges of IFE as a source of sustainable energy for the future.

In an invited talk on progress toward ignition on NIF, NIF&PS Chief Scientist John Lindl noted that NIF has achieved compressed fuel pressures within a factor of two to three of those required for ignition, and he discussed the efforts now under way to take NIF the rest of the way to ignition. NIF&PS Chief Technology Officer Chris Barty summarized NIF's experimental capabilities and results and described NIF's transition to an international user facility for high-energy-density science.

Nathan Meezan gave an invited talk on hohlraum designs for high-velocity implosions on NIF; and Mike Dunne described the integrated requirements and design solutions for the laser source (384 beams, each delivering 5.7 kilojoules of ultraviolet energy 15 times per second) for an IFE power plant capable of generating gigawatt levels of electrical power. The conference included a tour of NIF on June 12. 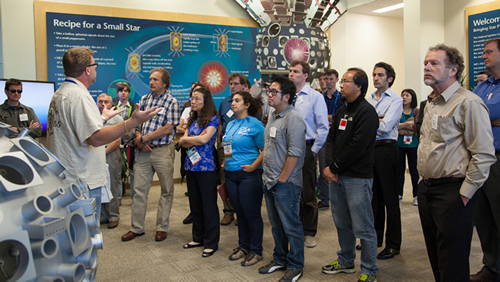 The newly formed NIF Management Advisory Committee held its first meeting June 11-12 at the Laboratory. Committee members and guests participated in a comprehensive review and discussions of NIF as an operational experimental facility.

The Peer Review Panel (PRP) for ICF and high energy density stockpile science (HEDSS) experiments met at the Laboratory on June 13. Chaired by LLNL's Mordy Rosen, the meeting included scientists from LLNL, Los Alamos and Sandia national laboratories, the Laboratory for Laser Energetics at the University of Rochester, and the UK's Atomic Weapons Establishment and Oxford University.

Dunne discussed the current status of the program to achieve ignition, presented recent experimental results, and described plans for the coming months.

In other SOFE talks, Tom Anklam and colleagues discussed the potential for commercialization of inertial fusion energy (IFE), and Susana Reyes gave an invited talk describing the safety basis for an IFE power plant. The symposium included a tour of NIF on June 12.

Chris Keane, director of the NIF User Office, discussed recent progress and future scientific opportunities in high-energy-density (HED) science at the Laboratory in a June 21 plenary address at the IEEE Pulsed Power Conference and International Conference on Plasma Science.

Noting that rapid advancement in laser and pulsed power technologies is enabling the study of matter at extreme conditions of pressure and temperature previously inaccessible in the laboratory, Keane said LLNL researchers and collaborators worldwide are actively engaged in developing this rapidly evolving area of fundamental science. NIF and LLNL's Jupiter Laser Facility (JLF), a smaller-scale facility readily accessible to postdocs and graduate students, along with associated simulation, laser, diagnostic, and target fabrication infrastructure, provide a premier capability for the study of matter at HED conditions.

Members of the Defense Science Study Group (DSSG), a program of the Institute for Defense Analyses, toured NIF on June 17. The DSSG works to develop links between the national security community and young, emerging leaders of science and technology and to convey an understanding of the technical dimensions of national security issues and an appreciation for the people and operations involved.