A technology designed to improve NIF's flexibility and efficiency and a technique to boost the power of fiber lasers have received 2013 R&D 100 Awards. Awarded annually by R&D Magazine, the awards recognize cutting-edge scientific and engineering technologies with commercial potential. This year's awards, among five won by LLNL, increase the total captured by NIF&ampPS and its predecessor, the Laser Programs Directorate, to 59 since 1978. This year's awards went to:

The awards will be presented to the winning teams in November.

The possible causes of discrepancies between the results of NIF implosion experiments and the predictions of simulations, and the plan to understand and resolve the underlying physics issues, were discussed by LLNL researchers and collaborators in the cover article in the July issue of Physics of Plasmas. 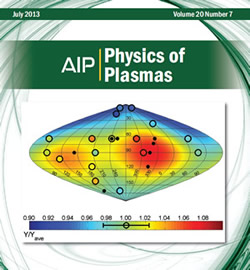 Cover image in the July issue of Physics of Plasmas shows the spatial distribution of primary neutrons from a NIF shot as measured by the 17 flange nuclear activation detectors (FNADS) distributed around the target chamber.

The authors noted that significant progress has been made toward achieving the deuterium-tritium fuel conditions necessary for ignition; fuel areal densities of 85 percent of the point design value have been achieved, and hot-spot temperatures in many implosions are comparable to those predicted to be needed for strong alpha heating. Nuclear yield, however, has been a factor of about 3-10 times below the simulated values, and a similar factor below the alpha-dominated fuel conditions that would begin to cause "bootstrap" heating leading to ignition.

"We have achieved key implosion parameters (yield, temperature, velocity, areal density) close to the ignition point design in separate, independent experiments, but not at the same time," the researchers said. "It appears that in the best-performing experiments, we are essentially 'trading' neutron yield for areal density."

Current theoretical and experimental efforts on NIF are focused on measuring and quantifying the deviation from modeled performance; the experiments include studies of three-dimensional hydrodynamics effects in an effort to isolate the source of ablator mixing into the hot spot. Experiments also are planned to better understand laser-plasma interactions in the hohlraum.

Lead author John Edwards was joined on the paper by LLNL colleagues and by collaborators from General Atomics of San Diego, the Plasma Fusion and Science Center at MIT, the Laboratory for Laser Energetics (LLE) at the University of Rochester, and Los Alamos and Sandia national laboratories.

A new, non-disruptive technique for measuring the amount of laser power transferred during cross-beam energy transfer (CBET) in NIF hohlraums was described by LLNL researchers and collaborators in a Physical Review Letters paper published July 9.

Measurements of laser-plasma interaction (LPI) in indirect-drive hohlraums have been largely limited to regions just outside the laser entrance holes. Probe access holes were sometimes cut into the hohlraum, but this process could alter the local plasma conditions and affect the measurement in an unknown way.

To develop a probe for LPI that could be used in places that are inaccessible by standard laser probes, the researchers employed stimulated Raman scattering (SRS) as a remote sensor to quantify the instantaneous laser power after transfer from outer to inner cones that cross in a NIF gas-filled hohlraum plasma. By comparing SRS from a shot reducing outer-beam power with the backscatter from a shot reducing inner-beam power, the researchers were able to infer that about half of the incident outer-cone power was transferred to inner cones for the specific time and wavelength configuration studied.

The experiment was the first non-disruptive measure of power transfer in an indirect-drive NIF experiment using optical measurements. A continuing aspect of the study, the researchers said, is to map out the CBET at different times in the laser pulse.

Existing models of the interior of extra-solar planets are based on extrapolations of experimental data and theoretical calculations. Better experimental equation of state (EOS) data at multi-megabar pressures are needed to improve these models. Ramp-compression experiments are potentially well-suited to this task as they can avoid the melting that occurs in shock experiments on iron above 225 gigapascals (GPa).

In a Journal of Applied Physics paper published online July 11, LLNL researchers and colleagues reported on experiments on NIF and the OMEGA Laser Facility at the University of Rochester in which multiple-thickness iron foils were ramp compressed over several nanoseconds to pressure conditions similar to the pressures in the Earth's core. Using wave-profile analysis, the sound speed and the stress-density response were determined to a peak longitudinal stress of 273 GPa (2.73 million times Earth's atmospheric pressure).

The NIF and OMEGA experiments demonstrated for the first time that ramp compression can be used to achieve high pressures in solid materials undergoing low-pressure phase transitions. The researchers said the initial steady shock pre-compresses the iron and allows different thermodynamic compression paths to be explored.

The International Center for Zettawatt-Exawatt Science & Technology Research (IZEST) 2013 Conference was held July 17-18 at the Laboratory. The meeting was the third in a series of international meetings held in support of the center, which works to develop exawatt (quintillion-watt) and zettawatt (sextillion-watt) laser systems. After welcoming remarks by the conference co-chair, NIF&PS Chief Technology Officer Chris Barty, NIF&PS Principal Associate Director Ed Moses discussed ignition and science experiments on the NIF. Conference attendees also were given a comprehensive tour of the facility.

Invited presentations and poster sessions addressed the development and status of novel ultrahigh-energy laser technologies around the world, such as the Exawatt Center for Extreme Light Studies in Russia, the Texas Petawatt Laser, Europe's Extreme Light Infrastructure – Nuclear Physics and International Coherent Amplification Network, and the Petawatt Aquitaine Laser in France. Other talks discussed frontier, ultrahigh-intensity science and applications that may be pursued with these sources.

A dedicated session looked at how NIF and similar megajoule-class laser systems might be best leveraged to produce exawatt peak-power laser pulses, and what high-impact, ultrahigh-intensity experiments might be conducted on such facilities. 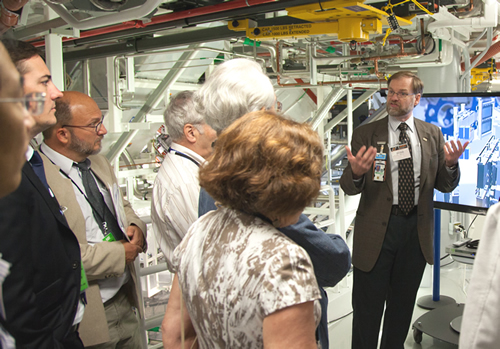 The conference brought together scientists from a variety of fields with interests in laser-matter interactions and high energy density physics. LLNL's Denise Hinkel provided welcoming remarks and closing comments, presented the results of recent NIF experiments, and described a new NIF target called the "quartraum," or quarter-hohlraum, a platform for investigating cross-beam energy transfer (CBET) as the NIF laser beams enter the hohlraum.

The National Nuclear Security Administration (NNSA) held a review of progress and the path forward toward inertial confinement fusion (ICF) ignition on July 23-24 at the Laboratory.

After opening remarks, the review panel heard reports from the working groups on indirect drive, polar direct drive, and magnetic drive ignition as well as the target fabrication and diagnostics working groups. The working groups were created to develop the input to the NNSA's report to Congress on the Path Forward for the ICF research program. There also were presentations on ignition-related activities at LLNL, the Laboratory for Laser Energetics (LLE) at the University of Rochester, Los Alamos and Sandia national laboratories, and the Naval Research Laboratory (NRL). The meeting concluded with a general discussion of ICF progress and priorities.

New insights into the dynamics of hydrodynamic instabilities that cause cooling of the hot spot in NIF ignition experiments were reported by LLNL researchers and collaborators in two journal articles published in July.

The researchers used x-ray spectroscopy to study hot-spot mixing of plastic ablator material doped with copper and germanium placed at different radial locations in the ablator. They concluded that ablation-front hydrodynamic instabilities seeded by high-mode ablator-surface mass perturbations from intrinsic capsule surface roughness, the fill tube, or microscopic dust particles can mix ablator material into the interior of the DT-fuel layer if the initial amplitudes and growth during the acceleration phase are large enough.

Strategies to control hot-spot mix from the ablation-front instability, the researchers said, include reducing the capsule surface-mass perturbations, reducing the growth factors of the hydrodynamic instability, or changing to another ablator material such as copper-doped beryllium.

The researchers used Fourier analysis of the images to quantify the evolution of "bright spots" in their hot-spot intensity profiles; the bright spots are caused by heterogeneous mixing of ablator material and fuel into the hot spot. Comparing the location of the bright spots with known isolated defects on the capsule surface, the researchers observed a strong correlation between bright-spot location and the fill tube used to inject fuel into the capsule. They said the results indicate that the fill tube "is a significant seed for the ablation front instability causing hot-spot mix.

"The fill tube is the predominant seed for symcaps," they said, "while other capsule non-uniformities are dominant seeds for the cryogenically layered DT and THD ice targets."

Lead author Maria Alejandra Barrios of LLNL was joined on the paper by LLNL colleagues and collaborators from LLE and LANL.

An obituary of long-time LLNL laser physicist John Murray, who passed away on June 2 at age 70, appears on the Physics Today Website. Murray developed RAPIER (Raman amplifier pumped by intensified excimer radiation) technology, which was successfully tested in 1983 at LLNL, as well as a krypton fluoride excimer laser. He also was instrumental in the design of the NIF laser system.

Fattah is a co-founder of the bipartisan House Science and National Labs Caucus and has introduced legislation calling 2013 the "Year of the Federal Lab" to emphasize the continued need for U.S. investment in research through federal laboratories.

"If America is to stay at the forefront of innovation, then we must invest in our national labs," Fattah commented after his visit to LLNL. "There is no doubt that these labs play a critical role in the research of energy, science, space and technology. I will continue to do everything I can to be sure they receive the Federal funding necessary to continue their ground-breaking work." 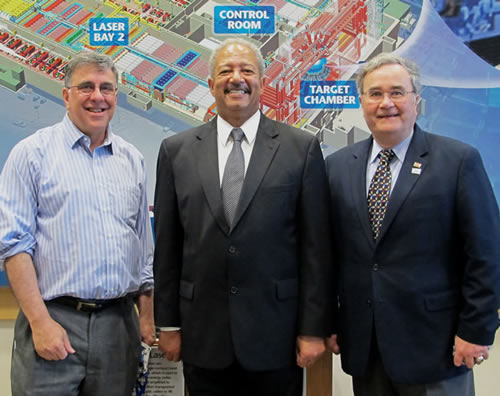 Phyllis Rothrock, a 93-year-old resident of the Livermore retirement community Heritage Estates, toured NIF on July 11 as a special guest of the Laboratory. Heritage is managed by Leisure Care, LLC, which has instituted a program called Wish Makers in which Leisure Care facilities compete to grant the most wishes of residents. The senior residents are encouraged to make a list of wishes, but Phyllis Rothrock had only one: to tour LLNL "to see the atom splitter and the Lab that made the new elements."

No stranger to science, she attended Purdue University, graduated with a B.S. degree in Chemistry, and continued her education at USC, receiving her M.S. in Education on a Ford Fellowship. The tour also included the Laboratory's Discovery Center and the Center for Accelerator Mass Spectrometry. 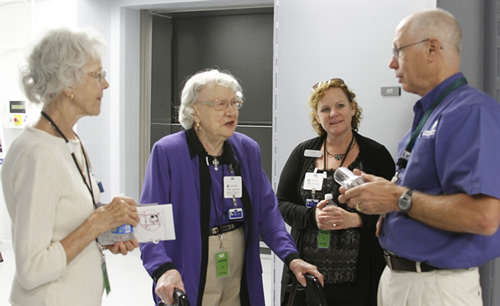 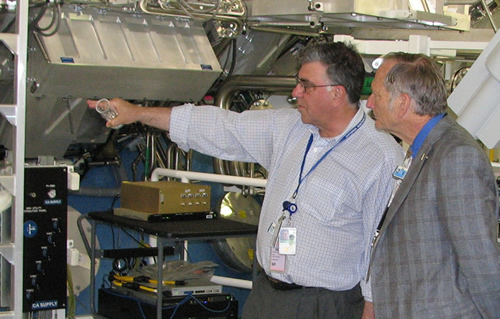