A new model for measuring the mix of ablator material into the hot spot in NIF inertial confinement fusion (ICF) implosions was described by LLNL researchers and collaborators in a Physical Review Letters paper published online Aug. 23.

In NIF ignition experiments, there is a tradeoff between implosion velocity, which increases as more mass is ablated, and the penetration of ablator material into the fuel by outer surface imperfections that grow at the ablation front due to Rayleigh-Taylor (RT) hydrodynamic instability. 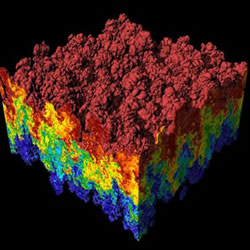 Image of a Rayleigh-Taylor hydrodynamic instability produced on a LLNL simulation computer. This growth also can seed perturbations at the fuel-ablator interface, which in turn become RT unstable during deceleration and stagnation. In situations with large RT growth, the ablator may mix into the deuterium-tritium (DT) fuel layer and hot spot, increasing radiative cooling and degrading performance.

The new model uses the ratio of the experimentally measured level of elevated x-ray emission to neutron yield to quantify the impurity mix of the shell ablator into the hot spot. By applying this model to the full ensemble of indirect-drive NIF cryogenically layered DT implosions to date, the researchers found that the high-velocity, high-convergence conditions in these experiments have resulted in an increased hydrodynamic mix of the ablator into the hot spot. The results show that DT neutron yield and ion temperature decrease abruptly as the hot-spot mix mass increases above several hundred nanograms.

The researchers said simulations with increased surface roughness or imposed low-mode asymmetries can bring the predicted yields and ion temperatures close to agreement with experimental observations; current experiments are focused on reducing these perturbations to improve implosion performance. Lead author Tammy Ma was joined on the paper by LLNL colleagues and collaborators from the Laboratory for Laser Energetics at the University of Rochester (LLE/UR), Los Alamos National Laboratory (LANL), and General Atomics of San Diego (GA).

The strength and relative timing of these shocks must be adjusted to very high precision to keep the DT fuel entropy low and compressibility high. All previous measurements of shock timing in ICF implosions had been performed in surrogate targets, where the solid DT ice shell and central DT gas regions were replaced with a continuous liquid deuterium (D2) fill.

The paper reports the first experimental validation of the assumptions underlying this surrogate technique and also presents the first measurements and analysis of shock mergers in the central DT gas region.

The data confirm the predicted shock propagation in DT ice layers and in the decompressing material following shock transit into the central gas. Together, these data confirm the surrogacy assumptions underlying the technique that is being used to optimize compression in both directly driven and indirectly driven ICF implosions. These initial experiments also demonstrate for the first time a measurement platform that can be used for further assessment of the properties of solid DT (e.g., equations of state) that are critical to the advancement of ICF. Additional experiments are being planned to take advantage of this new capability.

Lead author Harry Robey was joined on the paper by LLNL colleagues and by Tom Boehly of LLE/UR.

The other submitted technologies were: 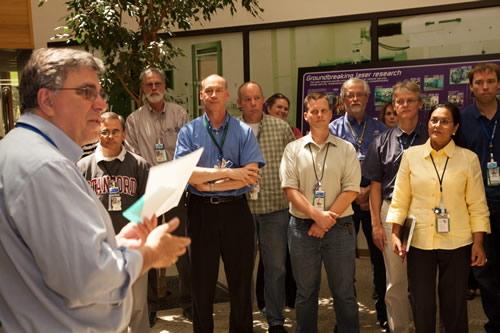 The contributors from NIF&PS and Engineering have developed unique technologies with important applications that go beyond their direct uses in Directorate programs.

A number of Laboratory researchers served as organizers, session chairs, and presenters for the 2013 SPIE Optics+Photonics Conference held Aug. 25-29.

A session on "Optics and Photonics for Information Processing" was co-chaired by LLNL's Abdul Awwal and featured a talk on Monte Carlo simulation of neutron and other noise effects on beam position determination with real and simulated beam images at NIF.

A half-day review of NIF's high-density carbon (diamond) capsule implosion experiments was held at LLNL on Aug. 20. Researchers from LANL, LLE/UR, and GA participated by videoconference. Diamond capsules are being developed as a possible alternative ablator for NIF ignition experiments.

A recent Physics of Plasmas paper reports on the first full two-dimensional radiation-hydrodynamic implosion simulations that explore the impact of highly compressed imposed magnetic fields on the ignition and burn of perturbed spherical implosions of ignition-scale cryogenic capsules.

The simulations sought to determine if applied axial seed magnetic fields could be sufficiently compressed in ignition-scale capsules to suppress hot-electron heat conduction and shorten alpha-particle range within the reduced scale lengths of highly perturbed implosion hot spots. The results indicate that the effects of the fields may relax the conditions required to achieve ignition and thermonuclear burn.

The researchers imposed initial axial seed fields of 20-100 tesla that compress to greater than 4 × 104 tesla under implosion, thereby relaxing the hot-spot areal densities and pressures required for ignition and propagating burn by about 50 percent. The compressed field is high enough to suppress transverse electron heat conduction and to inhibit alpha-particle range, allowing the alpha particles to couple energy into the hot spot even when it is highly deformed by large low-mode amplitudes, the researchers said. This might permit the recovery of ignition, or at least significant alpha-particle heating, in submarginal capsules that would otherwise fail because of adverse hydrodynamic instabilities.

Lead author John Perkins was joined on the paper by LLNL researchers George Zimmerman and Christopher Werner and by Grant Logan, Lawrence Berkeley National Laboratory (LBNL) (retired), presently an affiliate of both LBNL and LLNL. 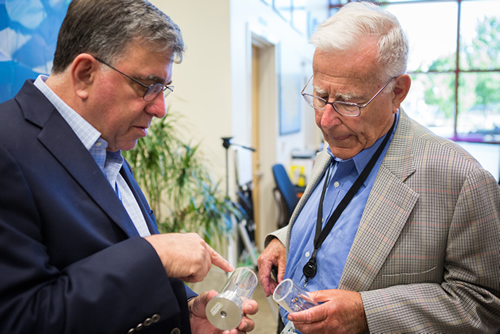 Ed Moses describes a NIF target to former LLNL Director and U.S. Secretary of Defense Harold Brown during an Aug. 22 tour of NIF. Brown, who served as the Laboratory's third director from 1960-61, was visiting LLNL for the first time in nearly 40 years for a Director's Distinguished Lecture Series discussion. Brown was accompanied on the tour by Washington writer Joyce Winslow, co-author of his new book, Star Spangled Security. 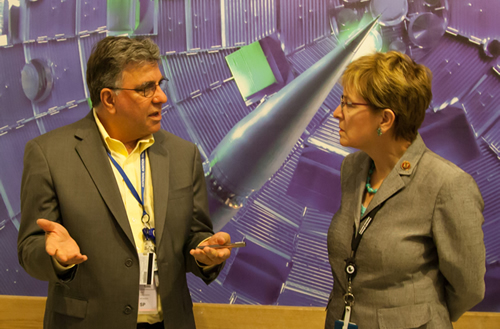 U.S. Congresswoman Marcy Kaptur, D-Ohio, toured NIF on Aug. 6. Rep. Kaptur is ranking member on the House Appropriations Subcommittee on Energy and Water Development and also serves on the Defense and Financial Services subcommittees. She is serving her 16th term in the House of Representatives. 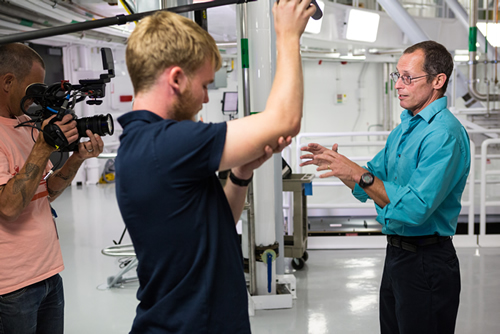 Planetary physics researcher Rip Collins (right) is interviewed by a crew from the UK-based production company Pioneer Productions during an Aug. 15 visit to film episodes for the Discovery Channel's "How the Universe Works" series. The space-science series examines physics and astronomy subjects. The episodes filmed at NIF – "Jupiter" and "The Sun" – will air in late 2014. 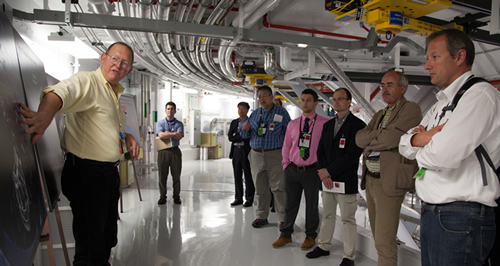