"The role of the NIF director has grown, become more visible 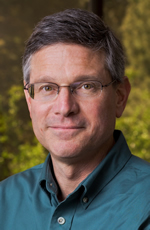 Jeff Athertonand needs to be continually interactive with the user communities," said Laboratory Director Parney Albright and NIF&PS Principal Associate Director Ed Moses. "It is time to redefine the role of the NIF director to concentrate on implementation of the governance process, be responsible for developing and maintaining a facility use plan, and communicating with the HED (high energy density) science community and the broader set of stakeholders."

Moses added that the role of the NIF director is to be an effective advocate for the NIF user communities and a facilitator of accurate communications between the facility and the experimentalists.

"We are very lucky to have Jeff available for this role," Moses said. "Jeff, as my deputy for NIF, has played a key role in the very important task of framing our approach to engaging NIF users and stakeholders. He has unique capabilities in the technologies, systems and operations of all aspects of the NIF. He has in-depth understanding of the missions of the NIF." 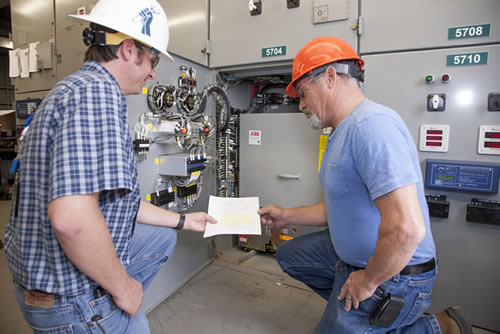 
During the five-week period, maintenance, testing, and upgrades were made to the ultra-high-speed protective relays that sense voltage and current abnormalities and re-direct power to available circuits when needed, enhancing the reliability of power delivery to NIF. Maintenance and testing of all high-current power switching components also was performed. Power to NIF was supplied by existing alternate sources during the maintenance period, with no interruption to NIF operations related to the LGS-57 upgrade. 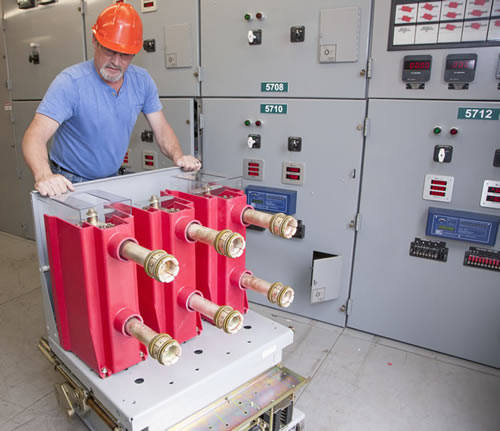 Mel Costa moves one of the "plug-in" modular circuit breakers into position for installation. The six metal tubes are the stabs that connect into the source and load connections inside each LGS cubicle. Behind the red plastic covers are the 1,200-amp switches, one per phase. The high-current contact sets are contained in vacuum bottles to minimize arcing during switching, an industry-standard approach for this class of switchgear.

LLNL Physics of Plasmas Papers among Most-Cited in 2012

Four of the six most-cited Physics of Plasmas papers in 2012 were written by LLNL researchers. Three of the four appeared in the May 2011 "Special Topic" section of the journal titled, "Plans for the National Ignition Campaign (NIC) on the NIF: On the Threshold of Initiating Ignition Experiments." The papers were:

Also in the top six was "Analysis of the National Ignition Facility ignition hohlraum energetics experiments," an invited paper for the 2010 meeting of the American Physical Society Division of Plasma Physics, by Richard Town and colleagues. 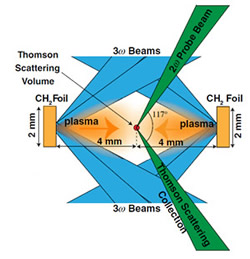 Laboratory astrophysics experiments present a unique opportunity to study shock generation mechanisms and to directly measure high-energy particle generation and particle acceleration at the front of a collisionless shock generated after a supernova explosion – a possible source of cosmic rays. In experiments at the OMEGA Laser Facility at the University of Rochester, LLNL researchers have discovered a novel mechanism that causes rapid electron and ion heating in high-velocity, collisionless counter-streaming plasma flows.

In a Physical Review Letters paper published online on April 2, lead author Steven Ross, Principal Investigator Hye-Sook Park, and their colleagues said significant increases in electron and ion temperatures (from less than 100 electron volts (eV) to more than 1,000 eV) were observed using Thomson scattering in the counter-streaming plasmas as compared to a single plasma stream. They attributed the heating to a combination of collisional electron heating via electron-ion drag and collisionless ion heating via an ion two-stream instability.

Particle-in-cell simulations including both collisional and collisionless effects were compared to the experimental measurements; "only the simulation including both collisional and collisionless (collective) effects accurately reproduce the measured ion heating," the researchers said. The work was carried out under a Laboratory Directed Research and Development funding and High Energy Density Science grant.

Maslennikov said the CBM and RCM programs, which include vibration analysis, oil analysis, ultrasonic lubrication, and the elimination of ineffective preventive maintenance tasks, have led to an efficient and cost-effective maintenance program. Joining Maslennikov in preparing the presentation were Nick Jize, Stanley Sommer, and Bernie Merritt. 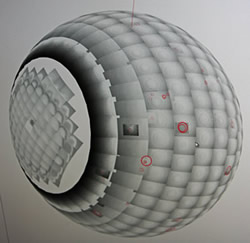 In NIF ignition experiments, a clean and well-characterized target capsule is critical to avoid the effects of isolated defects on implosion symmetry and mix of the ablator and fuel. Fuel is injected into the two-millimeter-diameter capsule via a 10-micron-diameter glass fill tube that can increase in diameter up to 150 microns.

The capsule fill-tube assembly line in the NIF target fabrication facility in Bldg. 381 has individual stations to test the capsule for leaks and clean its surface with a 100-micron-diameter solvent stream. The confocal microscope 4-pi capsule inspection system maps the full surface of the capsule. By mapping individual 100-micron patches of the surface, the system allows particles as small as a few microns introduced during assembly to be identified. Following these steps, the capsule is evaluated for mitigation and then readied for insertion into a hohlraum.

Among other LLNL presenters at the conference, Félicie Albert and colleagues presented an invited paper describing the results of experiments in which betatron x-rays with photon energies greater than 20,000 electron volts (eV) were produced in mixed gases in the Laboratory's Callisto laser system. This x-ray source, with properties similar to those of a synchrotron but with femtosecond (quadrillionth of a second) pulse duration, is a promising x-ray probe for warm dense matter or fusion plasmas. 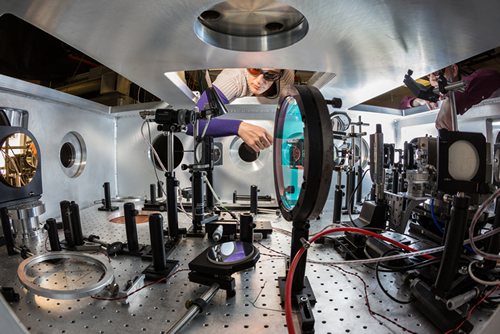 Callisto, a 200-trillion-watt laser, produced billion-eV-class electron beams as well as the thousand-eV betatron x-rays. Several diagnostics (electron-beam and x-ray spectrometers, interferometers) were implemented during the experiments, and electron energies up to about 500 million eV and x rays up to more than 20,000 eV were observed.

Albert was joined in preparing the presentation by Brad Pollock and Joseph Ralph of LLNL and collaborators from Chan Joshi's plasma accelerator group at UCLA. The work was supported by the LLNL Laboratory Directed Research and Development program.

At an April 23-25 Conference on Laser and Accelerator Neutron Sources and Applications organized by the Institute of Laser Engineering at Japan's Osaka University, Mike Dunne of NIF&PS gave a plenary talk on progress toward ignition on NIF, and LLNL's Lee Bernstein and colleagues presented an invited paper discussing the development of a new diagnostic, the Low Energy Neutron Spectrometer (LENS). LENS is designed to measure low-energy neutron levels for ignition and capture cross-section studies at NIF.

Joining Bernstein in preparing the presentation were LLNL colleagues and collaborators from UC Berkeley and Lawrence Berkeley National Laboratory.

Ed Moses presented two talks to the Nuclear Energy and Physics departments on NIF and its application in stockpile stewardship, energy security and physics of the cosmos at Texas A&M University on April 11-12. The talks described NIF's unprecedented experimental capabilities, its role in strategic security and fundamental science, and the pathway to achieving fusion ignition to create a clean and secure energy future. 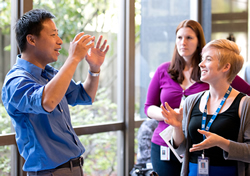 Zhi Liao describes a NIF experiment to attendees at the Earth Day celebration in Sacramento.

More than 120 employees of the California Department of Water Resources (DWR) and other state agencies learned about NIF and inertial fusion energy (IFE) during an Earth Day celebration in Sacramento on April 22.

A.J. Simon gave two presentations describing NIF and discussing how the science and engineering behind NIF could establish the scientific basis for achieving IFE, a clean, sustainable form of baseload power for the future. Zhi Liao presented an interactive exhibit on NIF and some of its high-tech components, including a virtual "immersive tour" of the NIF facility.

Simon and Liao "did a great job," said DWR Sustainability Coordinator Mary Simmerer. "The audience asked good questions at the end of each presentation, with the afternoon session running over by nearly 20 minutes."

Members of the NIF Team took a detailed look at the results of a March 31 layered deuterium-tritium (DT) implosion shape experiment during a NIF Data Review Workshop on April 30. The experiment, which featured a 15-nanometer capsule-mounting tent as part of continuous improvement in target capability, had the primary goal of commissioning new capabilities for measuring cold fuel areal density distribution and hot-spot motion at stagnation. The workshop focused on comparisons of results between x-ray and neutron/gamma-ray detectors.

Crossbeam energy transfer (CBET) has been used as a tool on NIF since the first energetics experiments in 2009 to control energy deposition in ignition hohlraums and tune the implosion symmetry. As large amounts of power are transferred between laser beams at the laser entrance holes (LEH) of NIF hohlraums, the presence of many overlapping beat waves can lead to stochastic (random) ion heating in the regions where laser beams overlap, reducing the efficiency of CBET.

In a Physics of Plasmas paper published online April 30, LLNL researcher Pierre Michel and colleagues report that stochastic ion heating from many beat waves created by multiple crossing laser beams can be an efficient saturation mechanism for CBET. "Strong ion heating rates are expected in a ~mm3-scale volume at the LEH of NIF hohlraums," the researchers reported. "The plasma flow should also be modified from momentum deposition: in the case of power transfer from 'outer' to 'inner' beams, as is currently the case for NIF experiments, the flow near the LEH should be accelerated; on the other hand, for experiments where power transfer would be required to occur in the opposite direction, i.e., from the outer beams to the inner beams, the flow would be decelerated near the LEH. A self-consistent hydrodynamics package including a ray-based CBET model together with the associated ion heating and momentum deposition is currently being tested in the HYDRA and LASNEX codes."

Joining Michel on the paper were Wojciech Rozmus of LLNL and the Theoretical Physics Institute at the University of Alberta along with LLNL colleagues Ed Williams, Laurent Divol, Dick Berger, and Debby Callahan and former LLNL researcher Siegfried Glenzer. 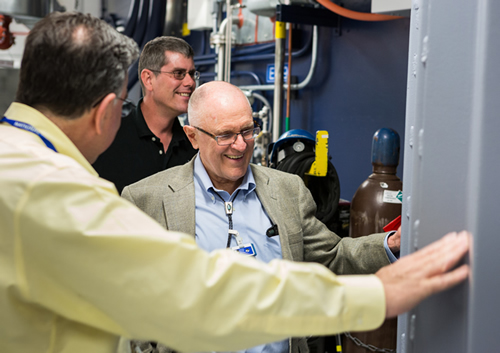 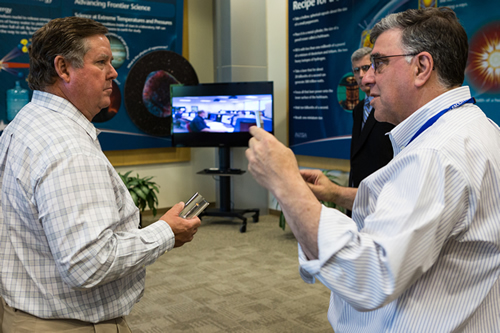 U.S. Rep. Ken Calvert, R-CA, (left) is briefed on how a NIF implosion works by Ed Moses. Rep. Calvert and members of his staff visited NIF on April 29. Rep. Calvert represents the 42nd Congressional District in southern California. He serves on the House Appropriations Committee and is a member of the Defense Subcommittee, the Interior and the Environment Subcommittee and the Energy and Water Subcommittee. He also serves on the House Budget Committee.