One of the most demanding aspects of preparing targets for NIF ignition experiments is growing the wafer-thin layer of solid deuterium-tritium (DT) fuel in the target capsule. Only 69 microns wide – about two-thirds the average width of a human hair – and frozen to 18.5 kelvins (minus-426 degrees Fahrenheit), the "DT ice" layer must be extremely smooth and free of grooves or other defects before the target can be approved for use in an experiment.

Cryogenically cooling the fuel to just below the freezing point of hydrogen, which changes hydrogen's phase from a gas to a liquid and finally to a solid, enhances the density of the fuel and improves the chances of achieving the required density for ignition. The ice layer takes an average of 14 hours of "script time" to grow, so rejection of a completed layer means at least a half-day delay in the experiment while a new layer is grown.

Space-time plots of a growing ignition-quality cryogenic DT layer and an out-of-spec, or "bad" layer. Time runs from top to bottom. X-ray images can be obtained from three different views of the layer. The use of a series of metrics to evaluate DT layers is expected to cut average layering time nearly in half.

A large effort is under way by NIF target fabrication and cryogenic fielding teams to achieve a higher NIF shot rate through improved engineering, automation, training, and early detection of defective layers. Among the techniques being employed by NIF researchers to shorten the time between experiments is the use of x-ray images called "space-time plots" to evaluate the quality of a layer as it grows. The technique, developed by members of the Target Systems and Optics Technology (TSOT) Group, is "a kind of forensics," said Science & Technology Group Leader Tayyab Suratwala.

"The space-time plots make it easier to visualize the signature of the growing layer and decide early on whether it will be a good layer based on a series of metrics, such as early groove detection and the rate of meniscus (DT layer) height change during early freeze," he said. "The time to yield a good layer can be shortened by detecting a bad layer earlier rather than later. Since February, the space-time plots have been employed as dashboards, allowing for real-time decision-making and increased efficiency." 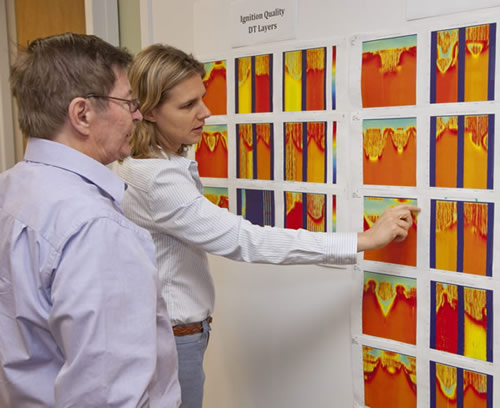 A number of LLNL and National Ignition Campaign (NIC) researchers gave presentations at the 19th High Temperature Plasma Diagnostics Conference held May 7-10. The conference was co-sponsored by LLNL and General Atomics (GA) and was chaired by LLNL's Bob Kauffman and GA's Joe Kilkenny.

The biennial conference brings together plasma physicists from a variety of fields, including magnetic confinement fusion, inertial confinement fusion (ICF), space plasmas, astrophysics, and industrial applications, to discuss mutual problems in the development of instrumentation and techniques for the characterization of high-temperature plasmas. 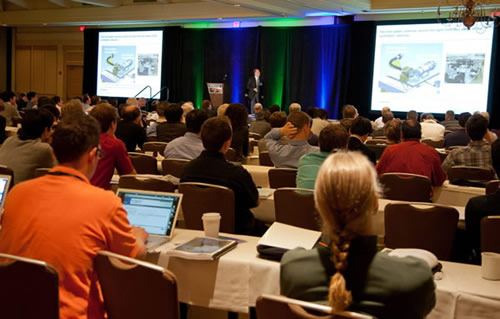 The Science on NIF Technical Review Committee met at the Laboratory on May 25. The Committee, chaired by University of Chicago Prof. Robert Rosner, former director of Argonne National Laboratory, reviewed progress and plans for fundamental science on NIF.

The Committee was enthusiastic about progress to date and looks forward to results from fundamental science experiments at NIF planned for later this year and next.

Recent progress toward achieving ignition conditions on NIF was described in two Physical Review Letters papers published on May 24. In a paper titled, "Precision Shock Tuning on the National Ignition Facility" (DOI:10.1103/PhysRevLett.108.215004), Harry Robey and colleagues discussed results from the first series of precision tuning "keyhole" experiments on NIF, which used optical diagnostics to directly measure the strength and timing of four shocks inside the hohlraum-driven, cryogenic liquid deuterium-filled capsule interior.

In a series of five shots, the strength and timing of these shocks was systematically adjusted, demonstrating a significant decrease in fuel adiabat (internal energy) over previously un-tuned implosions. The impact of the improved shock timing was confirmed in related DT layered capsule implosions, which are described in the second paper below.

Joining Robey on the paper were collaborators

from LLNL, Los Alamos National Laboratory (LANL), the Laboratory for Laser Energetics (LLE) at the University of Rochester, General Atomics (GA) in San Diego, and the Massachusetts Institute of Technology (MIT).

The compressibility of the imploded assembly was inferred from measurements of the ratio of down-scattered neutrons to primary neutrons. This down-scattered ratio (DSR) is proportional to the aerial density (ρR) of the fuel surrounding the neutron-producing plasma. These implosions showed the highest fuel compression (ρR about 1.0 g/cm2) measured to date (about two-thirds of the ignition requirement), exceeding the previous record by more than a factor of three.

The value of U.S. space satellite assets is estimated to be more than $1 trillion, and the worldwide value is nearly twice that. Accumulation of space debris has accelerated, increasing the debris in orbit and posing a major threat to space assets. NASA estimates that there are nearly 100,000 threatening-to-catastrophic-event objects. 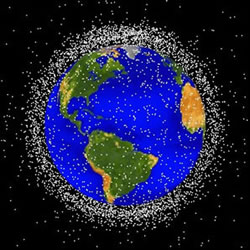 Approximately 95 percent of the tracked objects in low Earth orbit are space debris.

LLNL researchers Sasha Rubenchik, Al Erlandson and Duane Liedahl have assessed the laser pulse energy and the number of pulses required for removing orbital debris. In a presentation at the High-Power Laser Ablation Conference (HPLA 2012) on May 2, they said calculations show that a ground-based, diode-pumped, gas-cooled multi-slab laser that uses only modest extensions of existing technology, when used with a three-meter-diameter beam director, would be capable of removing most small debris from low-Earth orbit. Such a laser would also be capable of moving large debris into orbits that avoid high-value satellites and of removing large debris from orbit by illuminating the debris over several encounters.

To date, only systems developed for inertial confinement fusion are close to meeting the requirement for beam directors of reasonable size. The laser design proposed uses diode-pumped, neodymium:glass, gas-cooled amplifiers with 25-centimeter-square apertures.

LLNL Researchers Give Talks at CLEO: 2012

NIF&PS Director for Laser Fusion Energy Mike Dunne gave an invited presentation at the 2012 Conference on Lasers and Electro-Optics (CLEO: 2012) held May 6-11. Dunne's talk, "Recent Data from the National Ignition Facility," presented the latest results of the National Ignition Campaign and current designs for Laser Inertial Fusion Energy (LIFE) based on experience with NIF.

NIF Director Ed Moses was formally named a Fellow of the Optical Society of America during the conference. Moses was recognized for "outstanding technical leadership of the construction, completion and use of the world's largest and most energetic laser system, the National Ignition Facility." 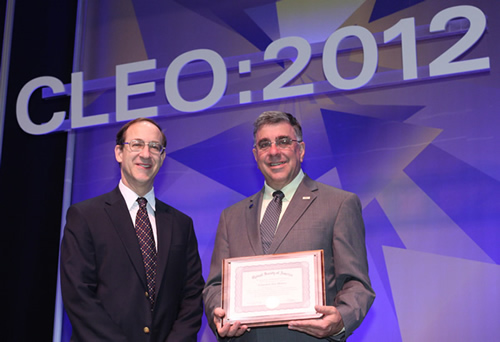 Workshop Continues Planning for Next Phase of NIF Diagnostics

The seventh in a series of workshops to discuss present and future diagnostic equipment for NIF was held at the Laboratory from May 14 to 16. About 80 members of the National Ignition Campaign and Stockpile Stewardship teams and the fundamental science user communities discussed the development of new diagnostics and plans for converting existing equipment from other high energy density facilities for use on NIF, with its higher energies and radiation levels and larger target chamber. Hosted by Joe Kilkenny, the workshop discussed NIF's future diagnostic requirements and the state of readiness of proposed diagnostic technology to meet those requirements.

The first measurements of fast ions produced in indirect-drive hohlraum experiments and their relationship to hot electrons were described by MIT and LLNL researchers in a Physics of Plasmas article published online April 30 (http://dx.doi.org/10.1063/1.4707410). In experiments at the OMEGA laser facility at the University of Rochester, the researchers observed protons in two energy regimes associated with different fast-ion production mechanisms. In both cases, runaway electrons set up a strong electrostatic field that accelerates the measured ions. Fast protons with energies from 300,000 to 800,000 electron volts were observed in both vacuum and gas-filled hohlraums. 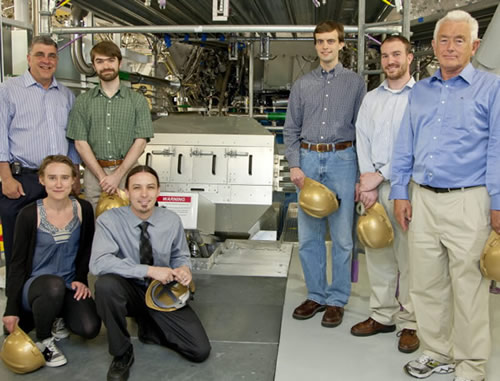 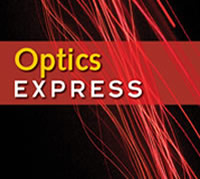 has been measured using large beams (1-3 centimeters); higher fluences cannot be measured easily, however, since the high density of resulting damage initiation sites results in clustering.

In an Optics Express article published on May 4 (http://dx.doi.org/10.1364/OE.20.011561), LLNL researchers report on the development of an automated damage testing station and analysis that make it possible to damage-test thousands of sites with small beams (10-30 microns) and automatically image the test sites to determine if laser damage occurred. For both uncoated and coated fused silica samples, the distribution of precursors nearly flattens at very high fluences, up to 150 joules/cm2, providing important constraints on the physical distribution and the nature of these precursors. This experimental procedure and analysis can be applied to a wide variety of optical materials to determine their damage behavior over wide fluence ranges.

Workshop on the Science of Fusion Ignition on NIF

and testing the injector and accelerator of a 250-MeV ultra-compact Compton scattering X-ray source under development at LLNL. In separate talks, Marsh discussed the X-band test station being developed at the Laboratory to investigate accelerator optimization for future upgrades to LLNL's mono-energetic gamma-ray (MEGa-Ray) technology; precision magnet measurements for X-band accelerator quadrapole triplets; and the challenges involved in modeling a multi-bunch X-band photoinjector.

Also presenting at IPAC 2012 were David Gibson, who described a drive laser for multi-bunch photoinjector operation and the narrow-band optimization of a Compton scattering gamma-ray source produced from an X-band linac; and Scott Anderson, who described the high-gradient inverse free electron laser accelerator being developed by LLNL and UCLA.

A number of LLNL researchers participated in the 20th Target Fabrication Conference held May 20-24. Featured were presentations by Steve Haan and colleagues from LLNL and Los Alamos National Laboratory on the current status of NIF ignition campaign target performance and requirements, and by Beth Dzenitis and colleagues from LLNL and General Atomics on cryogenic target production for commissioning tuning techniques and the first ignition tuning campaign on NIF. Both presentations discussed the design, purpose, and results of the various target designs used on NIF. 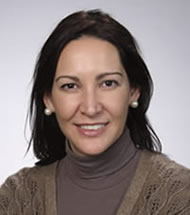 Susana has more than 12 years of experience in international fusion projects. She earned a M.Sc. in Power Engineering from the Polytechnic University of Madrid in 1998 and a Ph.D. in Nuclear Engineering from the UNED University in Madrid in 2001. She then joined LLNL's Fusion Energy Program to work on the safety analysis of inertial fusion energy power plant designs.

Since then, she has worked in a variety of fusion research projects, such as the ITER magnetic fusion facility under construction in Cadarache, France, where she was in charge of coordinating safety analyses in preparation for ITER licensing. She has also been strongly involved in neutronics and materials damage simulations at LLNL in support of high-energy accelerators and NIF. 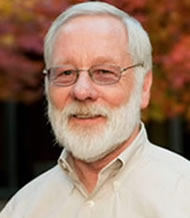 Veteran LLNL optical engineer and designer Lynn G. Seppala has been named a senior member of the Optical Society of America (OSA), an international society for optics and photonics scientists, engineers, educators, and business leaders. Senior membership status recognizes members with more than 10 years of significant experience and professional accomplishments or service in their field. Seppala received this recognition for his contributions to optics research.

Seppala joined LLNL in 1976 and now serves as chief optical designer for the laser fusion program. He received his Ph.D. in optics from the University of Rochester in 1974, was selected as the 2011 Distinguished Alumnus for the Hajim School of Engineering and Applied Sciences, and was inducted into the South Dakota Hall of Fame last September. In addition to his work on NIF, he was a key contributor to the optical design of the 8.4-meter-diameter Large Synoptic Survey Telescope. 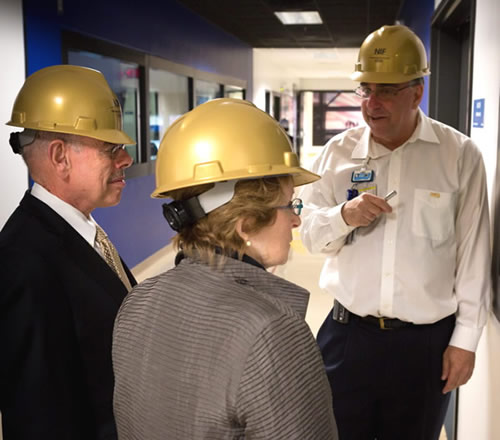