Heebner, who also won an R&D100 Award last year as co-developer of SLIDER, the world's fastest light deflector, was recognized for being the team lead on LEOPARD (Laser Energy Optimization by Precision Adjustments to the Radiant Distribution), which consists of 48 customized "programmable spatial shapers" that have been installed in the preamplifier modules (PAMs) at the front end of the NIF laser system. 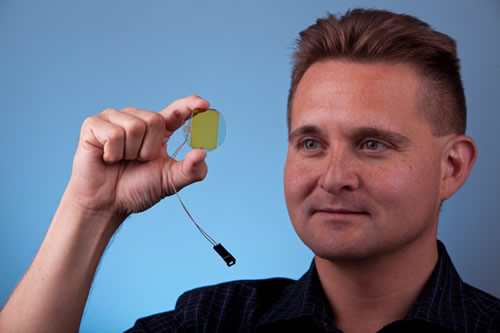 John Heebner holds an Optically Addressable Light Valve; the OALVs are in each of the 48 programmable spatial shapers forming the NIF LEOPARD system.

At the heart of each spatial shaper is an Optically Addressable Light Valve (OALV) that can obscure laser light at programmed locations within the beam profile to prevent the otherwise harsh laser fluence (energy per unit area) from exacerbating small, isolated flaws on downstream optical components. "The ability to temporarily 'shadow' these isolated flaws from high-fluence laser pulses helps protect the laser system and enhances operational flexibility," Heebner said.

The obscurations that produce the shadows, called "blockers," are introduced in the PAMs feeding NIF's beamlines in the laser's low-fluence, 1,053-nanometer (infrared) region, upstream of the main amplifier chain. Imaging and aligning the shadows onto flaws in the output 351-nanometer (ultraviolet) optics ensures that these flaws are protected with only a modest loss of beam area. 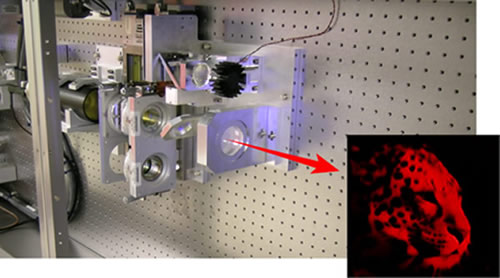 The HVLAD process is based on one of the Laboratory's earlier commercial successes, laser peening. HVLAD uses high-power pulsed lasers to produce coatings from materials that are difficult to deposit by other means, at room temperature and pressure, and with exceptional bond strength. 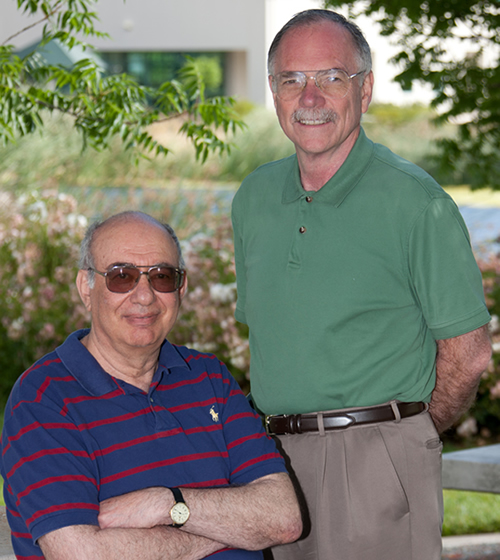 Seven members of the NIC team have been selected to receive the American Physical Society Division of Plasma Physics' John Dawson Award for Excellence in Plasma Physics Research.The award recognizes the team's success in employing power transfer between crossing laser beams in the NIF hohlraum, a technique that led to the use of two different laser wavelengths to improve implosion symmetry in NIF ignition targets.

The award will be presented at the annual meeting of the Division of Plasma Physics, to be held Oct. 29-Nov. 2 in Providence, RI. "It's great to receive this recognition for all the efforts of the team at this point in the development of ICF and especially for this critical technological development," Kirkwood said.

The Role of Lasers in Advanced Accelerators

In a June 12 talk, "High Average Power Lasers for Future Particle Accelerators," at the 2012 Advanced Accelerator Concepts Workshop, NIF&PS Fiber Laser Group Leader Jay Dawson surveyed the laser requirements for these applications and discussed laser technologies that may be applicable to them. Among the technologies he discussed were diode-pumped solid-state lasers (including cryogenic lasers), fiber lasers, OPCPA (optical parametric chirped-pulse amplification) -based lasers and titanium:sapphire lasers. Dawson discussed strengths and weaknesses of the various technologies and the most important issues to be addressed for moving from the current state of the art to the performance needed for accelerator applications.

In his presentation, Jay Dawson said fiber lasers are popular because they are an easy-to-use, low-maintenance, compact source of high-brightness, high-power laser light.

NIF Director Ed Moses gave a featured talk titled, "National Ignition Facility: Is Laser Fusion Energy Our Future?" on June 14 at the "Photonics Without Frontiers" event. The event was organized by the National Center of Competence in Research/Quantum Photonics (NCCR QP), a research instrument of the Swiss National Science Foundation (SNSF). The SNSF launched the first NCCRs in 2001 to promote scientific excellence through research, knowledge and technology transfer and training and promotion of women. Several of the leading thinkers and Nobel Prize winners in quantum optics were in attendance.

A key element in the record-setting performance of the NIF laser system during the last three years has been the availability and reliability of the Power Conditioning System (PCS). The PCS stores and then delivers approximately 400 megajoules (MJ) of electrical energy to the nearly 8,000 flashlamps installed in the main and power amplifiers of the NIF laser. Light from the flashlamps pumps the laser slabs in the amplifiers, providing the gain necessary to deliver high-power/high-energy laser pulses to a target.

In a presentation at the IEEE Power Modulator and High Voltage Conference in early June, PCS Manager Bruno Le Galloudec and colleagues reported that the system, which has participated in more than 2,000 system shots since 2007, has exceeded its reliability goals. 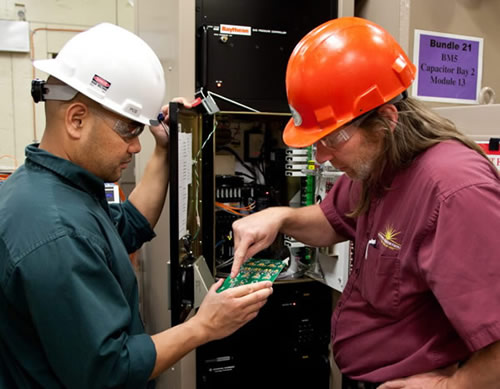 Power Conditioning System (PCS) technicians Quang Ngo (left) and Seth Robison examine a circuit board in NIF Capacitor Bay 2. The NIF PCS is deployed throughout four 1,150-square-meter (125,000-square-foot) capacitor bays in the facility. High-voltage capacitors are charged for about 60 seconds before releasing their energy in a 400-microsecond burst.

"The availability of the PCS system is kept at a high value," Le Galloudec said, "by keeping tested working spares for most components in all four capacitor bays and having PCS trained operators/maintenance workers available around the clock." He added that the PCS Engineering Group is working hard to predict component failures and improve existing component performance to reduce the frequency of maintenance activities.

"The PCS team must keep improving its own processes and develop and integrate upgrades to keep this system up-to-date and to support laser shot operations with maximum reliability and availability for many years to come," Le Galloudec said.

Two invited papers by LLNL researchers and their collaborators in the June issue of Physics of Plasmas trace the progress of the National Ignition Campaign (NIC) in achieving the target capsule implosion conditions needed for ignition.

The paper compares the results of the THD experiments with an experimental implosion performance metric called the experimental ignition threshold factor (ITFX), and also discusses the relationship between ITFX and other integrated performance metrics. The experimental results of the THD campaign indicate that recent efforts to "tune" capsule implosions "have resulted in an increase in ITFX by a factor of 60," the researchers reported. "NIC requires future experiments to increase ITFX by an additional factor of at least 10. Future experimental campaigns will focus on improvement in the delivery of drive during the fourth pulse, as well as continued improvement of implosion velocity, shape, and shock timing, in a push toward ITFX greater than 1 for THD implosions and DT implosions."

These experiments have resulted in "the highest areal densities and neutron yields achieved on laser facilities to date," according to the researchers. "This achievement is the result of the first hohlraum and capsule tuning experiments," they said, "where the stagnation (hot-spot) pressures have been systematically increased by more than a factor of 10 by fielding low-entropy implosions through the control of radiation symmetry, small hot electron production, and proper shock timing. Comparisons with radiation-hydrodynamic simulations indicate that the pressure is within a factor of three required for reaching ignition and high yield."

Glenzer was joined on the paper by collaborators from LANL, the Laboratory for Laser Energetics at the University of Rochester, the Plasma Science and Fusion Center at MIT, General Atomics of San Diego, Sandia National Laboratories, and the Atomic Weapons Establishment at Aldermaston, United Kingdom.

Four other NIC-related papers were also published in the June issue of Physics of Plasmas:

Fiber Laser Article in Optics Express Is Among Most-Downloaded

was among the most-downloaded articles from Optics Express in recent years, according to the Optical Society of America's Optics InfoBase Website.The article, "Analysis of the scalability of diffraction-limited fiber lasers and amplifiers to high average power," reported on studies designed to derive the average power limit of a single diffraction-limited fiber-based laser system.

"There is an optimum mode-size, fiber length, and a maximum output power that can be achieved with good beam quality from a single fiber amplifier," the researchers said. "The results in this paper will help the research community to establish future research direction."

X-ray bang time, corresponding to peak x-ray emission of an inertial confinement fusion (ICF) implosion, is used in NIF experiments to measure the energy coupling to the target by comparing measured bang time to predicted results from simulations. X-ray bang time is thus an important diagnostic for tuning the implosion velocity.

In a Review of Scientific Instruments paper published online on June 22 (http://dx.doi.org/10.1063/1.4729667), LLNL researchers reported that an internal chemical vapor deposition polycrystalline photoconductive diamond detector (IPCD) fielded at NIF has successfully measured x-ray bang time for imploding capsules to within ±41 to 46 picoseconds. Its collimated view along a line of sight within a few degrees of the hohlraum axis provides a temporal history of the capsule emission that is not contaminated by hohlraum x-ray emission.

More than 20 Laboratory researchers gave presentations at the 42nd Annual Anomalous Absorption Conference, which was sponsored by the Laboratory for Laser Energetics, from June 25 to 29. Among the LLNL presenters were Darwin Ho, who discussed the use of silicon compounds and high-density carbon (diamond) as ablators in NIC implosion capsules; Laurent Divol, who described modeling of plasma instabilities and after-bang radiative shocks on NIF; and Denise Hinkel, whose presentation discussed post-shot modeling and analyses of NIF cryogenic implosions.

The Rt. Hon. David Willetts, member of the British Parliament and Minister of State for Universities and Science, and other UK officials visited NIF on June 21 for discussions about US/UK collaborative opportunities in the areas of high energy density science and high performance computing. The UK provides funding for the NIF for advanced diagnostics and has a number of personnel on site for collaborative experiments. 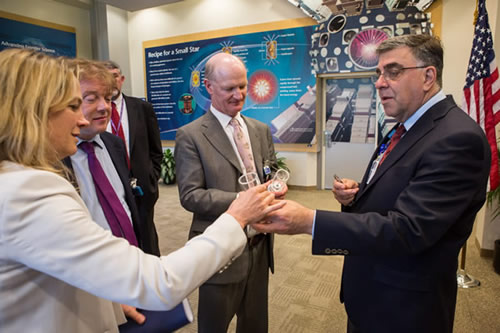 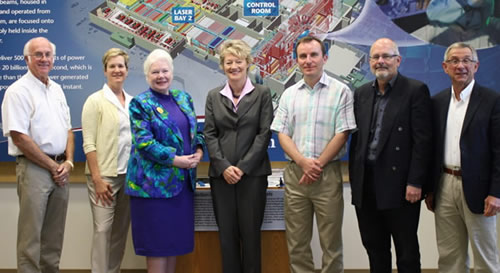 Elizabeth Dowdeswell (third from left), president and CEO of the Council of Canadian Academies and former UN under-secretary general and executive director of the UN Environmental Program, and Cassie Doyle (fourth from left), consul general of Canada in Northern California, visited NIF on June 8. Accompanying them on a NIF tour were (left to right) Dave Rardin, Betsy Cantwell, Mike Dunne, Tom Anklam, and Tom Isaacs.