A typical NIF experiment is over in a few billionths of a second. Obtaining meaningful information about what occurs during this extremely brief time period, in and around a tiny target, has required the design and development of a new breed of detectors, cameras, and other diagnostic instruments, many of which have been created through partnerships with universities and national laboratories.

One of these institutions, the Massachusetts Institute of Technology (MIT) Plasma Science and Fusion Center, has played a key role in developing, testing, and calibrating diagnostic equipment for NIF. Among the diagnostics tested and calibrated by the center's Ph.D. students and staff members are three devices designed to measure the spectrum and timing of neutrons and protons. 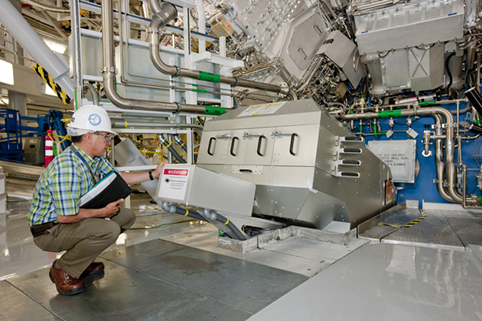 The Magnetic Recoil Spectrometer, shown here in the NIF target bay, was developed by MIT and the University of Rochester's Laboratory for Laser Energetics to measure the neutron spectrum from an implosion.

LLNL Senior Research Scientist Richard Petrasso's group at the MIT center has been creating detection techniques for inertial confinement fusion (ICF) experiments for more than a decade. One important diagnostic for National Ignition Campaign experiments, the magnetic recoil spectrometer (MRS), came about through a successful collaboration between MIT, which designed the device; the University of Rochester's Laboratory for Laser Energetics (LLE), which built it; and LLNL, which provided the setting for fielding the device.

The MRS is used to study the neutron spectrum from an implosion by measuring proton (or deuteron) energy produced in a collision with the neutrons. According to Rich Zacharias, lead engineer for NIF's nuclear diagnostics, "MRS is a critical diagnostic for measuring the energetics or yield and the density of the imploded targets. These are key components of the figure of merit to quantify how well the shot is approaching ignition conditions."

During fusion experiments, the imploding target releases neutrons. For the MRS technique, neutrons collide with protons in a plastic (CH) or deuterated plastic (CD) foil near the target chamber wall, producing protons of equivalent energy traveling in the same direction. These charged particles are then bent by a magnetic field after they travel through an aperture in the Target Chamber wall. The angle at which they bend depends on the energy of the protons, which is a measure of the density of the imploded target. 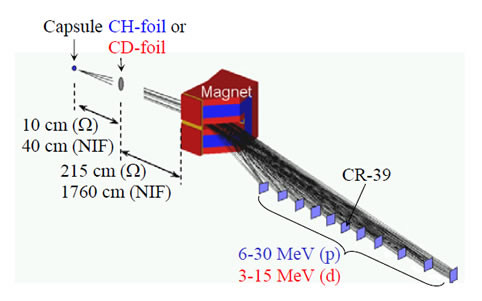 A schematic drawing of the MRS used on the LLE's OMEGA laser and on NIF, including the foil, magnet, and CR-39 detectors. The foil is positioned as close as possible to the implosion (10 cm in OMEGA and 40 cm in NIF); the magnet is positioned outside the target chamber in both facilities (215 cm to the foil in OMEGA, 1,760 cm to the foil in NIF). The same magnet design can be used on both OMEGA and NIF.

The stream of protons strikes an array of plastic coupons (detectors) and causes tracking. To study the resulting proton tracks, this array of plastic coupons must be developed using an acid etching technique and scanned with a scanning microscope. Scientists can determine the energy distributions of the neutrons emitted from the target by the density of the tracks distributed across the coupons. The neutron spectrum provides important information about plasma parameters such as ion temperature, density, and velocity. MRS's accuracy also makes it useful for calibrating other neutron diagnostics.

Other effective ways of measuring what happens in and around the target capsules developed by the MIT team include the wedged range filter (WRF), which measures the spectrum of proton energy using a wedge of filter material placed in front of plastic film that is processed using a similar method to the MRS; and the particle-time-of-flight (PToF) diagnostic, which helps determine the timing of charged particles using a diamond detector that responds to neutrons and protons.

MIT scientists have helped NIF build a processing facility for developing the MRS film, and they are actively involved in performing shot data analysis, reporting results, and troubleshooting, as well as enhancing and supporting the equipment they designed. About half a dozen MIT physicists and doctoral and post-doctoral students have an ongoing role in NIF diagnostics and are regularly on site performing research and analysis. 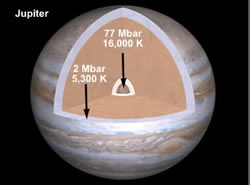 This cutaway view of the interior structure of Jupiter shows the transition from molecular to metal hydrogen and the possible core of rock, metal, and ice at the planet's center at 77 megabars of pressure (77 million times Earth's atmospheric pressure). The entire range of pressure-temperature conditions of a Jupiter-sized planet will be experimentally accessible for the first time using NIF.

A workshop on ways to address fundamental questions about the origin of planetary systems and the structure and evolution of planets in our own and other solar systems was held at LLNL on December 9.

Hosted by NIF&PS researcher Gilbert (Rip) Collins, the workshop, "Exploring Giant Planets on NIF: A New Generation of Condensed Matter," featured presentations by leading planetary physics researchers such as Raymond Jeanloz of UC Berkeley, Sarah Stewart of Harvard University, and Alan Boss of the Carnegie Institution of Washington. NIF Director Ed Moses gave a presentation on the status of experiments and fundamental science applications on NIF.

NIF's ability to replicate the pressures and temperatures in the core of giant planets such as Jupiter will provide scientists with a new level of understanding of the complex, multiphase systems that exist under the extreme conditions found within planets and during the giant collision phase of planet formation. Among the topics covered at the workshop were the physics needs for understanding planets, hydrogen and helium at extreme densities, and materials science and chemistry at extreme pressures (millions of times greater than Earth's atmospheric pressure). For more information on work at NIF and other facilities to study materials under extreme pressure, see the Science News article. 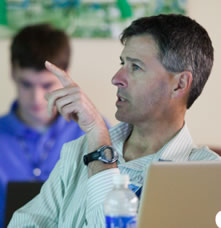 John Edwards, NIF&PS associate program director for inertial confinement fusion and high energy density (HED) science, has been named a 2011 American Physical Society (APS) fellow. APS fellows are nominated by other APS members and evaluated for excellence by colleagues in their specific research area, so fellowship is a distinct honor signifying recognition by a physicist's professional peers. Edwards was cited for fundamental contributions to hydrodynamics in HED physics and for his leadership in the National Ignition Campaign.

January 13 is the deadline to sign up for the February 12-15 NIF User Group meeting at LLNL. The meeting will describe NIF's capabilities to current and potential users and will include presentations on NIF experiments and related research at other facilities. Click here for more information and a link to register. 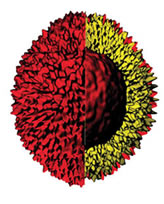 These density isosurfaces from a simulation of a NIF ignition capsule using the HYDRA three-dimensional radiation hydrodynamics code show the irregularities that result from Rayleigh-Taylor instabilities. The outer surface is near the ablator-fuel interface, and the inner surface is in the deuterium-tritium fuel.against a less dense fluid. The signature of the RT instability is a "bubble" and "spike" structure, in which fingers of dense material (spikes) interpenetrate the less dense fluid (bubbles), leading to a mixture of the layers of fluid. This can occur at the contact surfaces in exploding stars, and it also plays a role during multiple phases of inertial confinement fusion (ICF) capsule compression; RT growth during either the acceleration or deceleration phases of an ICF implosion can result in decreased ICF gain.

In an article in a recent issue of Physics of Plasmas, University of Michigan and LLNL researchers describe a design for experiments that would demonstrate the effects of a radiative shock on the dynamics of the RT fluid instability. The researchers propose using a hohlraum-produced thermal X-ray drive at NIF to create pressure by material ablation, resulting in a shock exceeding 200 Mbar (200 million times Earth's atmospheric pressure) that can be driven through a planar, solid-density target and into a lower-density foam material.

Calculations indicate that the radiative shock driven through the foam significantly alters the dynamics of the system, including those of the RT fluid instability at the interface between the two materials.

Contributing to the article were Channing Huntington, Carolyn Kuranz, and Paul Drake of the University of Michigan and Aaron Miles, Shon Prisbrey, Hye-Sook Park, Harry Robey, and Bruce Remington of LLNL. 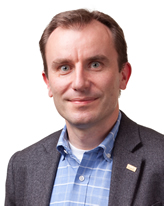 Mike Dunne, director for laser fusion energy in the NIF & Photon Science Directorate, has received the Fusion Power Associates 2011 Excellence in Fusion Engineering Award. The Award was presented on December 14 at the FPA's Annual Meeting and Symposium.

The FPA Board of Directors cited Dunne's "many technical contributions to high energy density physics and laser facility design and operations, both in the UK and in the US, and also the leadership he has been providing at LLNL" to the Laser Inertial Fusion Energy (LIFE) concept. Before coming to LLNL Dunne was director of the European High Power Laser Energy Research (HiPER) project.

FPA Excellence in Fusion Engineering Awards, established in 1987 in memory of MIT professor David J. Rose, have been given annually since that time to individuals who have shown both technical accomplishment and the potential to become exceptionally influential leaders in the fusion field.

Ed Moses and Mike Dunne gave presentations on the theme of "Fusion Energy Expectations" at the Fusion Power Associates (FPA) Annual Meeting and Symposium on December 14 and 15.

Moses discussed the status of National Ignition Campaign experiments on NIF, while Dunne outlined "A Path to Inertial Fusion Energy."

NIF&PS researcher Jeff Latkowski participated in a symposium session on pathways to inertial fusion energy along with Robert McCrory, director of the OMEGA Laser Facility at the University of Rochester, and representatives of Los Alamos, Sandia and Lawrence Berkeley national laboratories and the U.S. Naval Research Laboratory.

Updates on the status of two current reviews of fusion energy were also presented: the first by Ronald Davidson and Gerald Kulcinski, co-chairs of the National Academies of Science and Engineering study, "Prospects for Inertial Confinement Fusion Energy Systems"; and the second by Tom Mulford, program manager for advanced nuclear technology at the Electric Power Research Institute. 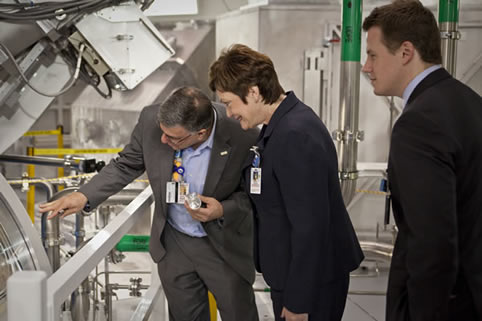 NIF Director Ed Moses shows the inside of the NIF Target Chamber to Ellen Tauscher, Under Secretary of State for Arms Control and International Security, and Special Advisor Kevin Lawson during their December 7 tour of NIF. Mrs. Tauscher, who represented California’s 10th District as a member of the U.S. House of Representatives, also participated in the ceremonies honoring outgoing LLNL Director George Miller on December 8.