Taming the ‘Bubble’ for Symmetric Implosions with Full NIF Energy

Researchers from LLNL and Los Alamos National Laboratory (LANL) have developed a new model to guide the design of NIF experiments aimed at minimizing the effects of the hohlraum “bubble” that contributes to target capsule asymmetries and interferes with NIF implosion performance.

The bubble results when NIF’s intense outer-cone laser beams hit the high-Z (gold or uranium) hohlraum wall, causing the wall to heat up and expand inward toward the hohlraum axis. The bubble robs energy from the inner-cone beams, causing an oblate, or pancake-shaped, implosion (see “Improving the Energy Balance in NIF Hohlraums”). 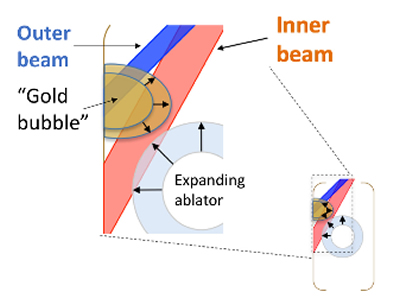 The high-Z bubble (“gold bubble”) is formed where the intense, outer-cone beams hit the hohlraum wall. The inner cone beams must propagate past the expanding gold bubble and the expanding ablator material before reaching the midplane of the hohlraum, where their energy is needed to produce a symmetric implosion.

While it’s possible to compensate for the energy loss caused by the bubble by increasing the power of the inner beams relative to the outer beams, they said, “this comes at a cost because the NIF laser is designed for ‘33% cone fraction’—1/3 of the beams are inner beams and 2/3 are outer beams. Anytime we operate at a cone fraction that is not 33%, we reduce the total amount of power and energy that can be delivered to the hohlraum.

“In order to maximize the neutron yield,” they said, “we want to symmetrically drive the largest capsule that we can on the NIF to high velocity by using all of NIF’s power and energy (up to 500 terawatts of power and 1.8 megajoules of energy).”

“Previous designs were generally done by optimizing the capsule by using a radiation drive source and then designing a hohlraum to produce that radiation drive source,” the researchers said. “The capsule and the hohlraum were then iterated to find a design. Since we believe that hohlraum drive asymmetry has been one of the main sources of yield degradation, optimizing the design including the hohlraum from the beginning seems a promising path. 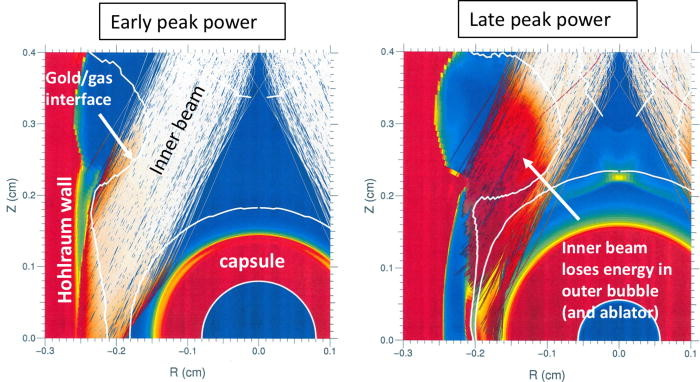 Simulations show that the inner beams (shown as rays) propagate freely to the hohlraum wall early in peak power. They deposit much of their energy in the gold bubble late in peak power. Gold/gas interface is shown with the white contour. The laser rays are colored by their remaining power—they enter the hohlraum with white color at full power and turn orange as they lose energy in the expanding gold bubble.

“We can use this data-based model to form the basis for new target designs for the NIF with the goal of symmetrically driving the largest capsule that we can with the NIF laser at near 33% cone fraction,” they said. “Since the capsule yield and the stagnation pressure are strong functions of the implosion velocity and the capsule radius, we want designs that are symmetric near NIF’s optimal 33% cone fraction, so that we can get the maximum amount of laser power and energy out of the laser. We plan to start testing designs using this methodology this year.”

Could diamonds be a NIF researcher’s best friend?

In a study of the relative advantages and disadvantages of the three ablator (target capsule) materials used in NIF inertial confinement fusion (ICF) experiments—high-density carbon (HDC), or diamond; glow discharge polymer plastic (CH); and beryllium—diamond emerged as the most promising ablator material to improve NIF’s performance, at least in the near term (see “How NIF Targets Work”). 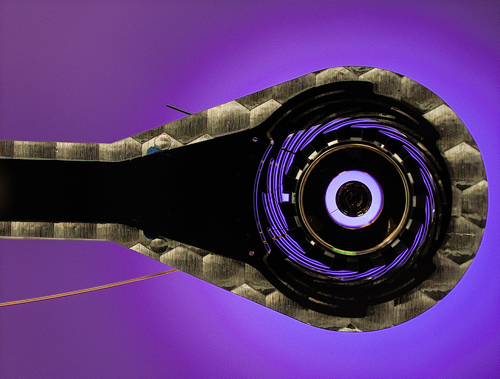 A diamond capsule suspended by “tents” inside a NIF hohlraum.

The study, which compared the three options in capsule-only simulations of current NIF experiments and potential future designs, was reported in a Physics of Plasmas paper published online on March 7. It looked at how the ablators responded to implosion perturbations caused by the fill tube used to inject deuterium-tritium fuel into the capsule, the support “tent” that suspends the capsule in the hohlraum, and the capsule’s surface roughness—both one at a time and in combination. The perturbations interfere with NIF implosion performance and degrade energy yields.

“According to the simulations,” the authors said, “each ablator is impacted by the various perturbation sources differently, and each material poses unique challenges in the pursuit of ignition on NIF.”

The simulations used the radiation-hydrodynamics code HYDRA and were run in both a post-shot mode to model past experiments and a pre-shot or predictive mode to assess the prospects of future designs intended to exploit the full power and energy of NIF. They predicted that the relative impacts of the different perturbation sources vary from post-shot models to extrapolated designs.

Simulations of ablator designs scaled to full NIF energy and power, including alpha-particle deposition and all perturbation sources except short-wavelength mixing.

“For example,” the researchers said, “the tent impacts CH most in the post-shot simulations but impacts beryllium most in the extrapolated designs. This variation underscores the important point that the ablator choice is not the single determinant of perturbation growth but that pulse shape and other design choices strongly influence the results. Indeed, selecting the optimal pulse shape is an essential choice in developing better performing designs.”

The researchers also noted that “there are many ablator-specific features such as opacity inhomogeneities from contaminants, material strength effects, and crystalline micro-structure which are not addressed here but deserve attention in future work.

“Based on current understanding and the results described (in the paper),” they said, “the HDC ablator design looks best positioned to reach higher (energy) yields on NIF in the near term. In fact, implosion designs similar to the scaled-up HDC design…are the subject of active work aiming for higher yield in the very near future. The CH design looks similarly promising, although it absorbs less energy at a given scale than HDC and cannot be driven as efficiently.

“The future performance of the beryllium design looks most uncertain due principally to the higher surface roughness of current beryllium shells and inadequacies in current modeling,” the researchers said. “However, the dataset of beryllium implosions on NIF is extremely limited and less effort has been devoted to improving capsule quality in recent years, so more experience will be needed before reliable predictions can be made.”

For the first time, LLNL researchers have successfully 3D-printed optical-quality glasses, on par with commercial glass products currently available on the market. 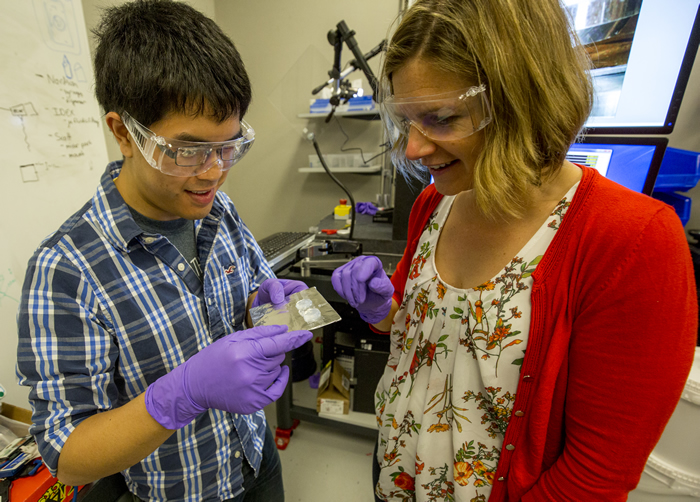 Because the refractive index of glass is sensitive to its thermal history, it can be difficult to ensure that glass printed from the molten phase will result in the desired optical performance, researchers said. Depositing the LLNL-developed material in paste form and then heating the entire print to form the glass allows for a uniform refractive index, eliminating optical distortion that would degrade the optic’s function. 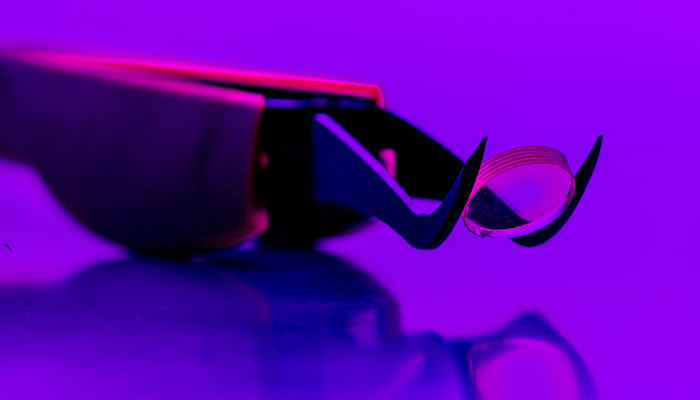 “Components printed from molten glass often show texture from the 3D-printing process,” said LLNL chemical engineer Rebecca Dylla-Spears, the project’s principal investigator, “and even if you were to polish the surface, you would still see evidence of the printing process within the bulk material. This approach allows us to obtain the index homogeneity that is needed for optics. Now we can take these components and do something interesting.”

The custom inks, aimed at forming silica and silica-titania glasses, give researchers the ability to tune the glass’s optical, thermal and mechanical properties, Dylla-Spears said. For the study, researchers printed small, simple-shaped optics as proof of concept, but Dylla-Spears said the technique eventually could be applied to any device that uses glass optics and could result in optics 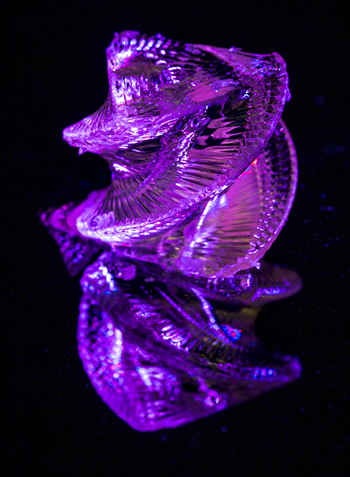 3D printing allows glass to be formed into complex shapes with features smaller than one millimeter, such as the helical structure shown in this photograph, which was selected for the back cover of a forthcoming issue of Advanced Materials Technologies as well as for an “Art of Science” exhibit now showing at the Bankhead Theater in Livermore. Credit: Jason Laurea made with geometric structures and with compositional changes that were previously unattainable by conventional manufacturing methods. For example, gradient refractive index lenses could be polished flat, replacing more expensive polishing techniques used for traditional curved lenses.

“Additive manufacturing gives us a new degree of freedom to combine optical materials in ways we could not do before,” Dylla-Spears said. “It opens up a new design space that hasn’t existed in the past, allowing for design of both the optic shape and the optical properties within the material.”

The LLNL team is moving on to work on mixing and patterning the different material compositions in hopes of getting control over material properties and making gradient refractive index lenses. LLNL has filed a patent on the technique and already is receiving interest from large-scale glass manufacturers.

“The Dawn of an Optical Revolution,” Science & Technology Review, September 2017