Imagine trying to bake a cake in an oven with uneven heating. Chances are you’ll get a cake with the top undercooked and the bottom overcooked, or vice versa. The same principle applies to NIF hohlraums and targets; if the x-ray energy generated in the hohlraum by NIF’s lasers is uneven, the target capsule’s implosion won’t be symmetrical and implosion performance will suffer.

Maintaining implosion symmetry in indirectly-driven inertial confinement fusion relies heavily on the ability to control the laser energy reaching various portions of the hohlraum wall at all times. The I-Raum geometry adds a small pocket at the location where the outer cones hit the hohlraum wall to displace the gold bubble outward. One upper and lower 44˚ and 50˚ quad are shown here.

Recent inertial confinement fusion (ICF) experiments on NIF have shown just such energy imbalances between the inner and outer cones of the laser beams caused by the growth of a “bubble” of hohlraum wall material (hohlraums are made of gold or depleted uranium). The bubble, a result of the higher-intensity outer-cone beams hitting the hohlraum wall, absorbs energy from the inner-cone beams and causes an oblate, or “pancaked,” implosion that limits implosion performance.

To deal with this problem, LLNL researchers have designed a new shaped hohlraum called the “I-Raum” that shows promise of enhancing the energy yield from NIF implosions by equalizing the energy deposited by the laser beams on the walls of the hohlraum. The innovative design, aimed at controlling and maintaining implosion symmetry for as long as possible, was described in a Physics of Plasmas paper published online on Jan. 22.

The researchers said the absorption of the inner cone beams by the “bubble” reduces the laser energy reaching the hohlraum equator during the later stages of the laser pulse. The new hohlraum is designed to reduce the bubble’s impact by adding a recessed pocket at the location where the outer cones hit the hohlraum wall.

“This recessed pocket displaces the bubble radially outward,” they said, “reducing the inward penetration of the bubble at all times throughout the implosion and increasing the time for inner beam propagation by approximately one nanosecond (billionth of a second). This increased laser propagation time allows one to drive a larger capsule, which absorbs more energy and is predicted to improve implosion performance by as much as a factor of eight in neutron yield.”

The new design is based on a June 2017 NIF shot which produced a record neutron yield. The expansion rate and absorption of laser energy by the bubble was quantified for both cylindrical and shaped hohlraums, and the predicted performance was compared. The design has not yet been fine-tuned, the researchers said, “which would be expected to increase the performance further. Future work is ongoing to design an initial series of tuning experiments to establish the initial shock timing, symmetry, laser backscatter, etc. These experiments will be essential for quantifying the potential benefits of this design.”

The development and potential applications of laser wakefield acceleration (LWFA)-driven light sources are featured in an article by NIF & Photon Science physicist Félicie Albert in the January issue of Optics & Photonics News, published by the Optical Society of America (OSA).

LWFA is an emerging technology that promises to dramatically reduce the size and cost of the giant accelerators currently used as radiation sources for a wide variety of scientific research. Albert, an innovator and expert in research related to the generation of radiation sources from laser-plasma and laser-electron acceleration, received the 2017 Katherine E. Weimer Award from the American Physical Society Division of Plasma Physics in part for her “pioneering development and characterization of x-ray sources from laser-wakefield accelerators.”

In the article, Albert notes that LWFAs, which use a laser-driven plasma to accelerate electrons, have “the potential to reduce the size of accelerators from kilometer to lab-bench scales—and to revolutionize applications in medicine, industry and basic sciences.”

The types of radiation that LFWAs might provide include betatron x rays, among those Albert’s team is studying at LLNL (see “Betatron X Rays Bring Focus to a Very Small, Very Fast World”); Compton-scattering x rays and gamma rays; bremsstrahlung x rays that occur when an electron’s trajectory is bent as it passes a nucleus; x rays produced by free-electron (X-FEL) lasers; and terahertz and coherent transition radiation. 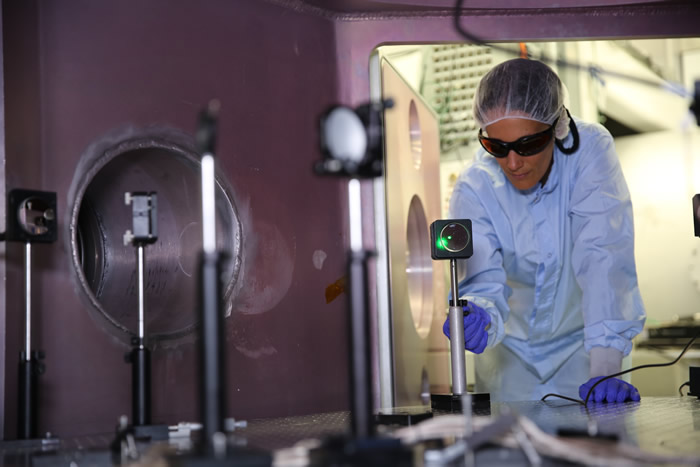 These radiation sources could be used in applications ranging from medicine (diagnostic radiology) and biology to photon probes of transient phenomena and high-resolution gamma-ray radiography. They also are beginning to be used to probe high energy density science experiments.

“The applications that LWFA will enable could result in major breakthroughs across many scientific disciplines, largely due to these light sources’ ultrashort pulse duration, the photon energies they can produce, and their versatile, compact layout, which allows them to be combined with almost any experiment,” the article concludes. “These achievements will be possible in the future thanks to developments in diagnostic and target technology, and to the emergence of new, petawatt-class short-pulse laser facilities around the world,” such as the LLNL-developed advanced petawatt laser system, L3-HAPLS, that was installed last month at the ELI Beamlines Research Center in the Czech Republic.