In an experiment designed to mimic the conditions deep inside the giant icy planets of our solar system, scientists have observed “diamond rain” for the first time as it formed under extremely high pressure. Along with providing insights into planetary science, the research could enhance understanding of the chemistry of target capsules during inertial confinement fusion (ICF) implosions.

The interiors of giant planets such as Uranus and Neptune contain solid cores surrounded by a dense slush of different “ices” consisting primary of hydrocarbons, or hydrogen molecules connected to light elements like carbon, oxygen, and nitrogen. Researchers have long speculated that the extreme pressure that arises more than 8,000 kilometers below the surface splits the hydrocarbons, a process known as species separation, and creates solid diamonds that sink slowly down to the planets’ core. 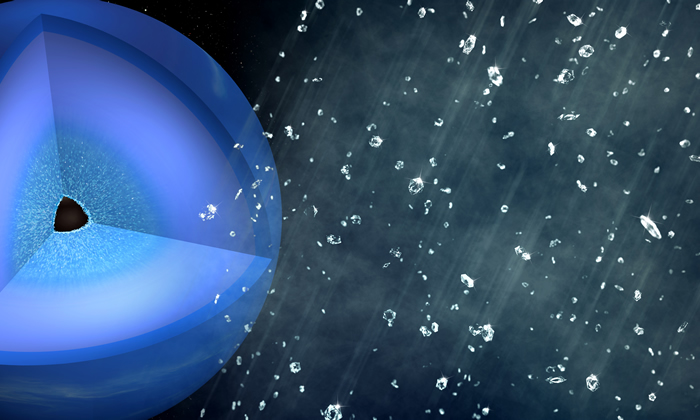 Experiments at the Linac Coherent Light Source, one of the world’s most powerful x-ray lasers, enabled an international team of researchers led by former LLNL postdoc Dominik Kraus to demonstrate how hydrocarbon compounds split into carbon and hydrogen inside ice giants like Neptune, shown in a cutaway image. The intense pressure and temperatures then turn the carbon into “diamond rain.” Credit Greg Stewart / SLAC

An international team of collaborators simulated the environment inside the planets by creating shock waves in polystyrene (C8H8) samples dynamically compressed with an intense optical laser at the Matter in Extreme Conditions (MEC) instrument at the SLAC National Accelerator Laboratory’s x-ray free-electron laser, the Linac Coherent Light Source (LCLS). Using ultrafast x-ray pulses, they could watch the microscopic diamonds form in real time.

They published their findings on Aug. 21 in Nature Astronomy.

In the experiment, the scientists could see that nearly every carbon atom of the original plastic was incorporated into “nanodiamonds”—tiny diamond structures up to a few nanometers (billionths of a meter) wide. They predict that on Uranus and Neptune the diamonds would become much larger, perhaps millions of carats in weight. The researchers also think it’s possible that over thousands of years, the diamonds could sink through the planets’ ice layers and assemble into a thick layer around the core.

The idea for the experiment was born in LLNL’s NIF & Photon Science Directorate, where Dominik Kraus of the Helmholtz-Zentrum Dresden-Rossendorf (HZDR) research laboratory in Dresden, Germany, lead author on the publication, had been stationed as a University of California-Berkeley postdoctoral researcher.

“Previously, researchers could only assume that the diamonds had formed,” said Kraus, who heads a Helmholtz Junior Research Group at HZDR. “When I saw the results of this latest experiment, it was one of the best moments of my scientific career.”

Team member Tilo Döppner, LLNL’s experimental lead for ICF implosions using polystyrene target capsules, watched the experiment for clues about how and when mixtures of carbon and hydrogen separate under extreme pressure. Döppner said such species separation during implosions could result in mass-density fluctuations that could seed hydrodynamic instabilities, potentially interfering with implosion results. “In current ICF implosions,” he said, “the first shock drives plastic at higher pressures to significantly higher temperatures compared to this recent LCLS work, to conditions where we are confident that species separation does not occur.” 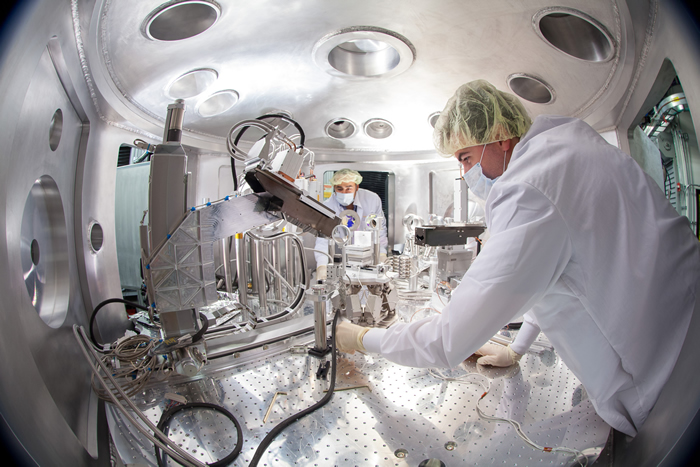 At LCLS, the researchers drove two shock waves through polystyrene samples that had been compressed by a pressure of about 150 gigapascals (1.5 million times Earth’s atmosphere) and temperatures of about 5,000 degrees Celsius—conditions resembling the environment about 10,000 kilometers below the surfaces of Neptune and Uranus. The plastic simulates compounds formed from methane, a molecule with one carbon atom bound to four hydrogen atoms that causes the distinct blue cast of Neptune.

“The first smaller, slower wave is overtaken by another stronger second wave,” Kraus said. “Most diamonds form the moment both waves overlap,” when the pressure is at its peak.

The process takes only a fraction of a second, so the researchers used ultrafast x-ray diffraction to take snapshots of the diamonds’ creation and the chemical processes involved. LCLS’s x-ray pulses last just femtoseconds, or quadrillionths of a second, enabling the scientists to directly measure the chemical reaction.

“For this experiment, we had LCLS, the brightest x-ray source in the world,” said co-author Siegfried Glenzer, professor of photon science at SLAC and a former LLNL plasma physicist. “You need these intense, fast pulses of x-rays to unambiguously see the structure of these diamonds, because they are only formed in the laboratory for such a very short time.”

Glenzer noted that the LCLS experiment suggests chemistry may play an important role in the compression stage of ICF implosions. “Simulations don’t really capture what we’re observing in this field,” he said. “Our study and others provide evidence that matter clumping in these types of high-pressure conditions is a force to be reckoned with.”

The result of the experiment is the first unambiguous observation of high-pressure diamond formation from mixtures. It agrees with theoretical predictions about the conditions under which such precipitation can form and will provide scientists with better information to describe and classify other worlds.

When astronomers observe exoplanets outside our solar system, they can measure two primary traits—their mass, which is determined by the wobble of stars, and their radius, observed from the shadow when the planet passes in front of a star. The relationship between the two is used to classify a planet and help determine whether it may be composed of heavier or lighter elements.

“With planets, the relationship between mass and radius can tell scientists quite a bit about the chemistry,” Kraus said, “and the chemistry that happens in the interior can provide additional information about some of the defining features of the planet.”

Information about how elements mix and clump together under pressure in the interior of a planet can change how scientists calculate the relationship between mass and radius, allowing the scientists to better model and classify individual planets. The falling diamond rain also could be an additional source of energy, generating heat while sinking toward the core.

“We can’t go inside the planets and look at them, so these laboratory experiments complement satellite and telescope observations,” Kraus said. The researchers plan to apply the same methods to look at other processes that occur in the interiors of planets.

In addition to the insights they give into planetary science and ICF, nanodiamonds made on Earth potentially could be harvested for commercial purposes—uses that span medicine, scientific equipment and electronics. Now, nanodiamonds are commercially produced from explosives; laser production may offer a cleaner and more easily controlled method.

The research was supported by the U.S. Department of Energy’s Office of Science and the National Nuclear Security Administration.