Recent papers in Physical Review Letters, the prestigious physics journal, described two of NIF’s latest experimental campaigns aimed at improving performance—one using larger hohlraums and a lower-density gas fill, and the other using liquid instead of frozen hydrogen. Both designs produced intriguing results that should help guide the pursuit of laser-driven inertial confinement fusion (ICF) in the coming months.

Target design changes provide insights into some of the National Ignition Facility’s most pressing questions (see “How NIF Targets Work”). Answering those questions is driven by science-based research needed to solve national security challenges and could shed new light on the fusion process that powers the sun and stars.

NIF’s chief mission is to provide experimental insights and data for the National Nuclear Security Administration’s science-based Stockpile Stewardship Program. These experiments represent an important step in the continuing demonstration that the stockpile can be kept safe, secure, and reliable without a return to nuclear testing. Ignition physics and performance also play a key role in fundamental science and may eventually be important for potential energy applications.

LLNL researchers reported that the use of longer hohlraums with a larger ratio between the diameter of the hohlraum and the capsule diameter (the “case-to-capsule” ratio), along with lower density of the helium gas inside the hohlraum, significantly improves the radiation drive environment, and thus symmetry control, of a NIF “high-foot” implosion. This results in enhanced implosion performance. Symmetry is important because it ensures that energy isn’t lost in lower-compression areas as the fuel is compressed. The Physical Review Letters paper describing the experiments was published online on Nov. 23. 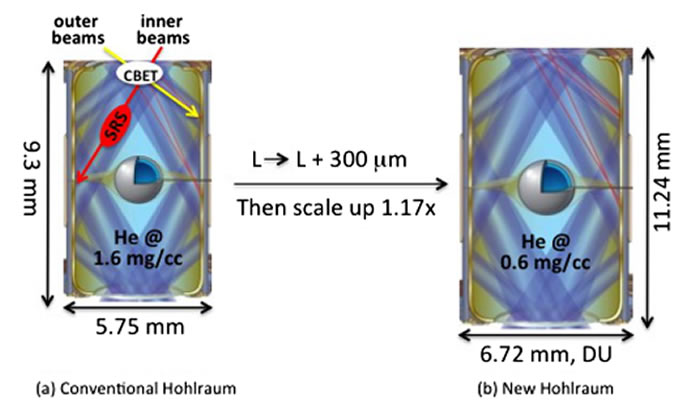 A conventional hohlraum (left) compared to a longer, wider hohlraum with a larger case-to-capsule ratio. The conventional hohlraum for high-foot implosions is filled with helium gas at high density (1.6 mg/cc), which the inner beams have difficulty penetrating. To compensate, researchers use a process called cross-beam energy transfer (CBET) to transfer energy from outer to inner beams. Stimulated Raman scattering (SRS), or backscatter, occurs along the inner beams, generates hot electrons, and worsens drive asymmetry. The new gold-lined depleted uranium (DU) hohlraum for high-foot implosions is longer, larger, and fielded at lower gas fill density (0.6 mg/cc). This produces less SRS along the inner beams and lessens the need for CBET.

For the first time, the modified hohlraums also reduced the amount of high-energy “hot” electrons generated by laser-plasma interactions, which can preheat the fuel and sap the energy of the implosion, to a negligible level. In addition, the amount of laser energy coupling to the hohlraum substantially increased, and discrepancies with simulated radiation production were notably reduced.

“At fixed laser energy,” the researchers reported, “high-foot implosions driven with this improved hohlraum have achieved a 1.4× increase in stagnation pressure when the capsule is compressed, with an accompanying relative increase in fusion yield of 50 percent as compared to a reference experiment with the same laser energy.”

In high-foot experiments, NIF researchers turn up the power of the NIF lasers during the “picket” of energy that occurs at the beginning of the laser pulse in an effort to make the target capsule’s imploding shell, known as the ablator, more resistant to breakup; previous experiments had shown that capsule instabilities were reducing target compression and degrading performance. The added power increased the radiation temperature in the “foot,” or trough, period of the pulse, which improved the ablator’s stability while reducing compression later in the implosion. The high-foot experiments have produced NIF’s highest energy yield to date.

“Fielding high-foot implosions in a longer, larger hohlraum at lower gas fill density has resulted in a significantly better hohlraum, which in turn provides a radiation environment that improves implosion performance,” the researchers said. They added that these experiments will enhance their scientific understanding of high-foot and other x-ray-driven implosions, and “we will be looking for ways to further exploit these results in future experiments.”

Until last year, target capsules in NIF ignition experiments were lined with a wafer-thin layer of deuterium-tritium (DT) “ice,” cryogenically cooled to just below the freezing point of hydrogen, which changes hydrogen’s phase from a gas to a liquid and finally to a solid. Cryogenic capsules, cooled to a liquid or solid DT temperature and density, are necessary for achieving ignition with the energy available on NIF. Even then, the fuel must be further compressed by more than a factor of 1,000 in density in a high convergence ratio (CR) implosion. The difficulty is that small asymmetries and hydrodynamic instabilities are increasingly amplified as the capsule converges and can distort and cool the central hot spot too much for it to spark ignition.

Several years ago, Rick Olson of Los Alamos National Laboratory (LANL) and his colleagues hit on the idea of using liquid, instead of solid, hydrogen as a way to readily control the convergence ratio of the DT fuel (the initial fuel radius divided by the imploded radius) without having to redesign the target each time. The researchers thought reducing fuel CR in this way could enhance the robustness of hot-spot formation by improving implosion symmetry and reducing hydrodynamic instabilities. 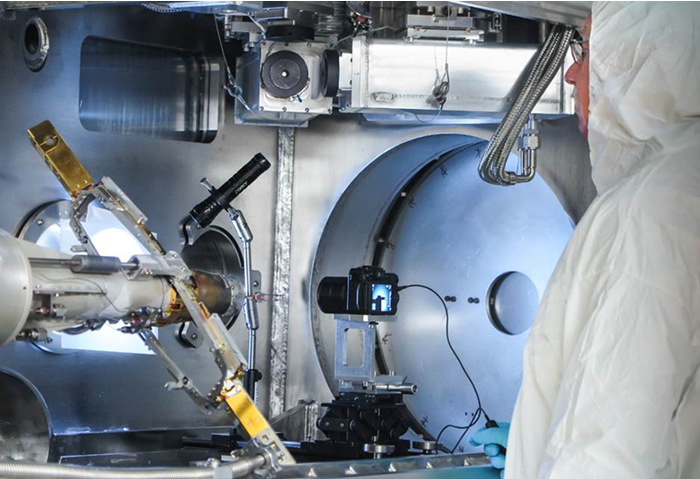 Preparing for a liquid-DT experiment, cryogenics operator John Mourelatos performs a quality-assurance check of the target’s vibration response during closure of the protective shroud in the NIF cryogenic target positioner.

The liquid-hydrogen target design uses a target capsule lined with a DT-saturated polymer foam developed over the last decade by members of LLNL’s Material Sciences Division and target specialists at General Atomics (see “Solving the Challenges of Making Liquid-Hydrogen Targets”). Experiments using the foam-layered fuel capsules “demonstrate for the first time implosions of cryogenic DT layered capsules with a low hot-spot convergence ratio,” the researchers said, “(and) the ability to vary the CR of a layered implosion in a predictable manner via a change in the initial cryogenic fielding temperature of the target” (see “NIF Liquid-Hydrogen Target Gets Its First Test”).

The capsule and hohlraum used in the liquid-layer experiments. The gold (Au) hohlraum is filled with low-density helium. The high-density carbon (HDC), or diamond, shell thickness is 63 microns, and the outer radius is 907 microns. At right is a view of the capsule through the laser entrance hole of the hohlraum.

“High neutron yields (comparable to many full laser energy experiments) were achieved despite using less than half of the NIF laser energy,” they said. “These first liquid layer experiments create a new NIF experimental platform that provides an opportunity to explore the relationship between the hot-spot convergence ratio and the efficiency of hot-spot formation during ICF implosions. The new platform also enables designs in which dopants (small, controlled amounts of impurities) in the fuel layer can be used to diagnose the plasma conditions at the edge of the hot spot, the density of the cold fuel surrounding the hot spot, and the mix of cold fuel into the hot spot.”

In a NIF ICF experiment, a tiny capsule containing two forms of hydrogen, deuterium (D) and tritium (T), is suspended inside a cylindrical x-ray “oven” called a hohlraum. When the hohlraum is heated by NIF’s powerful laser beams to temperatures of more than three million degrees Celsius, the resulting x rays heat and blow off, or ablate, the surface of the target capsule. This causes a rocket-like implosion that compresses and heats the DT fuel until the hydrogen atoms fuse, releasing large amounts of energy. If the implosion is symmetrical, and compression and temperature in the “hot spot” at the center of the capsule are sufficient, the energy from a self-sustaining fusion reaction outstrips the rate at which x-ray radiation losses and electron conduction cool the implosion—a condition known as ignition.