Study Could Lead to Fusion Insights

By reducing hydrodynamic instabilities and the mixing of capsule material into the hydrogen fuel, the recent “high-foot” (high initial laser energy) experiments on NIF achieved record neutron yields and showed signs of alpha-particle heating of the fuel, or “bootstrapping,” a necessary step forward on the path to ignition. This was accomplished, however, by trading off fuel convergence and compressibility due to the resulting high entropy, or adiabat (internal energy) of the fuel—a potential challenge to pushing high-foot experiments to ignition conditions. 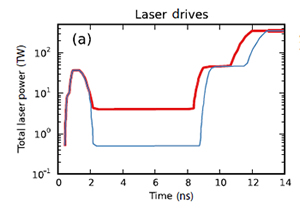 The nominal high-foot (red line) and new high-picket (blue line) laser drives. For the high-picket design, the laser power in the trough is reduced by approximately a factor of eight, within NIF laser specifications, and the second and third shock launch times are adjusted to maintain shock merger structure.

To address this challenge, LLNL researchers have tested an alternative adiabat tuning methodology that seeks to maintain the ablation front stability benefits of the high-foot design while placing the fuel on a lower adiabat to permit higher convergence and compression and potentially increased neutron production. This “high-picket” design involves an adjustment to the high-foot pulse known as “adiabat shaping,” accomplished by lowering the laser power between the first and second of the three high-foot pulses (the “trough”) so that the first shock remains strong initially but decays as it transits the ablator and enters the capsule fuel.

In a Physical Review E Rapid Communication published online on March 9, the researchers reported that capsule and hohlraum simulations indicate that hohlraum cooling is sufficient to launch decaying shocks that can lower fuel adiabat, but maintain hydrodynamic stability with adequate symmetry control, suggesting that adiabat shaping (a technique long proposed for direct drive) may be possible with indirect-drive implosions.

Initial experiments on a high-picket design with a lower trough and second pulse have demonstrated behavior largely consistent with the design simulations. For example, a Jan. 15 cryogenic deuterium-tritium experiment using the adiabat-shaped design showed enhanced compression and yield over a companion high-foot implosion without evidence of ablator-fuel mix. 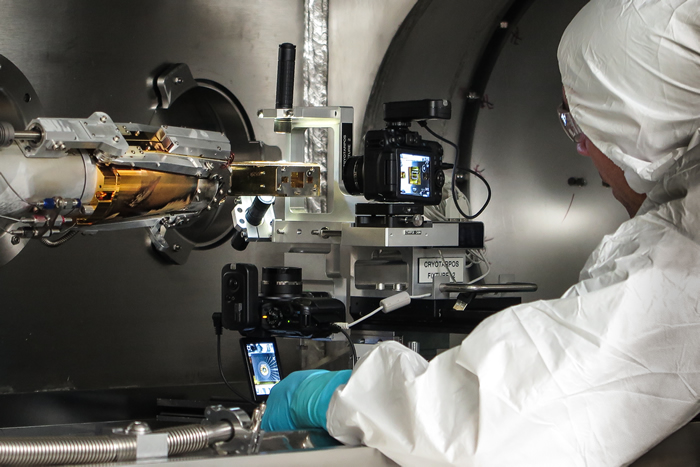 Study Could Lead to Fusion Insights

An international team of researchers working at the SLAC National Accelerator Laboratory, including several from NIF & Photon Science, have documented the quick transformation of shock-compressed aluminum into an exotic state called warm dense matter (WDM). Their pioneering findings could lead to new insights into the physics of inertial confinement fusion, material science, and planetary formation.

Warm dense matter is a complex state found at pressures of a few million atmospheres and temperatures of tens of thousands of degrees. In a Nature Photonics paper published online on March 23, the researchers reported on their use of a tabletop nanosecond-pulsed laser to shock-compress a thin aluminum foil, forcing it to a pressure more than 4,500 times higher than the deepest ocean depths and superheating it to nearly four times hotter than the surface of the sun.

The team then used ultrabright x-ray pulses from SLAC’s Linac Coherent Light Source (LCLS), an x-ray free-electron laser, to illuminate the warm dense states in situ and obtained snapshots of the material’s atomic structure with a variety of x-ray scattering diagnostics, yielding a wealth of information.

“The heating and compression of warm dense matter has never been measured before in a laboratory with such precise timing,” said Siegfried Glenzer, distinguished staff scientist at SLAC and former NIF&PS plasma physics group leader. “We have shown the detailed steps of how a solid hit by powerful lasers becomes a compressed solid and a dense plasma at the same time. This is a step on the path toward creating fusion in the lab.”

“The new data provide important benchmarks for future theoretical and numerical descriptions of warm dense matter,” said LLNL physicist Marius Millot, a co-author. “In addition, these experiments demonstrate that coupling x-ray free-electron lasers with dynamic compression is a new, powerful way to probe matter at extreme conditions, complementing studies with large lasers like OMEGA (at the University of Rochester) or the National Ignition Facility.”

on Laser Safety in February 2005. The report was issued in response to several exposure events which occurred over a short period of time across the complex.

“Since then,” King said, “the number and severity of events have significantly decreased. Laser safety across the DOE complex is in a far better place than it was ten years ago. Whether it be networking, sharing in best practices, the quality of LSOs (laser safety officers), or the strive for uniformity across the complex, considerable progress has been made and continues to be made to ensure world class laser research is done safely. The use of high-powered lasers within the DOE is being performed in quite a safe manner.”

King discussed lessons learned from incidents that have occurred since the SOR was published—three of which resulted in injuries—but noted that no overexposures have occurred over the past two years, and the fact that even minor occurrences are now being reported “is a testament to the safety culture that is being fostered across the DOE complex.”

Nevertheless, “we must remain forever vigilant,” King said. “As shown from the lessons learned in tracking DOE laser-related occurrences over the years, accidents don’t just happen. Safety is a team effort, and all must participate for it to work!”

In the cover article of a special issue of Advanced Engineering Materials on laser polishing, Ibo Matthews and LLNL colleagues describe the techniques they have developed to remove surface flaws on fused silica laser optics by using localized infrared (IR) laser heating. 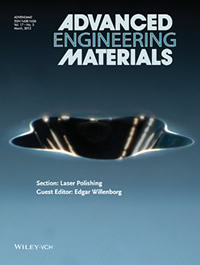 The paper presents both simulation and experimental results of the use of mid- and far-IR laser light to polish, anneal, and microshape fused silica surfaces. Depending on the polish and surface figure requirements, the resulting material response can be tuned by considering the temperature-dependent optical constants of the material and choosing the appropriate set of laser parameters. Calibrated, time-resolved thermal imaging enables monitoring of the laser polishing process to optimize the thermal and mechanical response of the material.

Predicted temperatures and heat-affected zones based on finite element modeling were found to compare well with experiment. The paper also describes the effect of various laser treatments on surface morphology, glass microstructure, and laser-induced damage threshold. The work builds on NIF&PS research and development involving CO2 laser treatment of glass dating back to the early 80’s.

Atomic force microscope profiles of roughened silica surfaces before (A) and after (B) laser heating for 30 seconds with a 10.6-micron infrared laser, with incident laser power (P) normalized to beam size (a)=0.01 W µm−1. The roughened surface was created by evaporating and recondensing silica using high laser powers (P/a>0.025 W µm−1).

The team’s results have relevance beyond their immediate application to damage mitigation in high-energy laser systems, and can be used for any application that requires laser smoothing and shaping of silica surfaces. Matthews was joined on the paper by Steven Yang, Nan Shen, Selim Elhadj, Rajesh Raman, Gabe Guss, Isaac Bass, Michael Nostrand and Paul Wegner. The work was supported by LLNL Lab-Directed Research and Development (LDRD) grants.