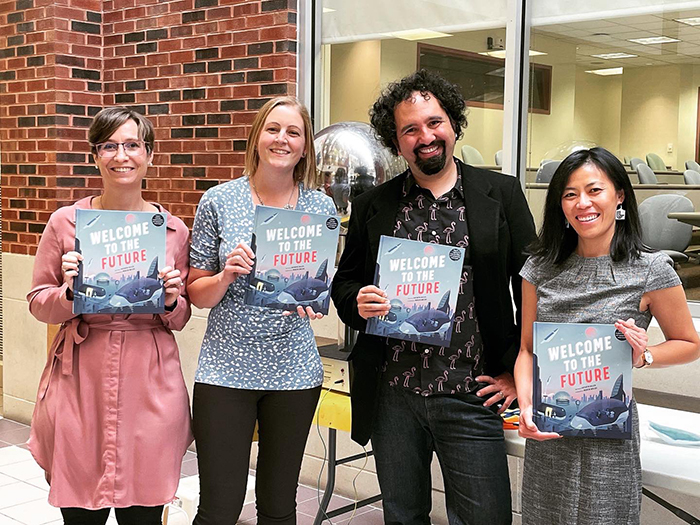 Welcome to the Future author Kathryn Hulick (second from left) poses with the three fusion energy scientists she interviewed for her book—(from left) Saskia Mordijck of the College of William & Mary in Virginia, Arturo Dominguez of the Princeton Plasma Physics Laboratory in New Jersey, and LLNL’s Tammy Ma. They met at a book reading for middle school students during the annual APS Division of Plasma Physics meeting in Pittsburgh, Pennsylvania. Credit: Kathryn Hulick

NIF’s scientific research helped shape a chapter in a new book imagining life on Earth in the not-so-distant future when fusion-generated electricity flows from a “trapped star.”

“It shines in the same way as our sun or other stars in the night sky but fits into a single room,” according to the book Welcome to the Future. “Engineers figured out how to tap into the energy of the stars and create very small ones here on Earth. Now, all the cities of the world have their own trapped stars. They provide enough electricity to power all of human society, now and far into the future.”

Research at the present-day National Ignition Facility (NIF) is bringing that scenario closer to reality, especially after an Aug. 8 experiment took researchers to the threshold of ignition. And LLNL’s Tammy Ma, Advanced Photon Technologies (APT) program element leader for High-Intensity Laser High Energy Density (HED) Science, was one of the scientists author Kathryn Hulick interviewed while researching a chapter on “Endless Fusion Energy,” which includes NIF, the world’s largest and most energetic laser.

When NIF fires up its lasers, “we are the hottest place in the solar system,” Ma says in the book. “We really are making stars.”

She adds that achieving ignition, when a NIF implosion produces more fusion energy than the amount of laser energy delivered to the target, would cause a huge celebration that “will be a little like landing on the moon.”

With whimsical illustrations by Polish artist Marcin Wolski, Welcome to the Future is aimed at readers from fourth grade through high school—the future stewards of planet Earth.

The book examines the possibilities and perils of 10 technologies popularized in science fiction, including ubiquitous robots, teleportation devices, colonies built on other worlds or in space, and an endless supply of food for all. And the book dives into the implications of living forever, genetically engineered forms of life, gaining superpowers and telepathic communications, and a “singularity” merging people with intelligent machines.

“Tammy was an obvious choice for that chapter, and she was one of the first people I reached out to,” said Hulick, a veteran science journalist. “She’s great, she really does know how to make science accessible.” (Hulick also posted a transcript of her full Interview with Ma.) 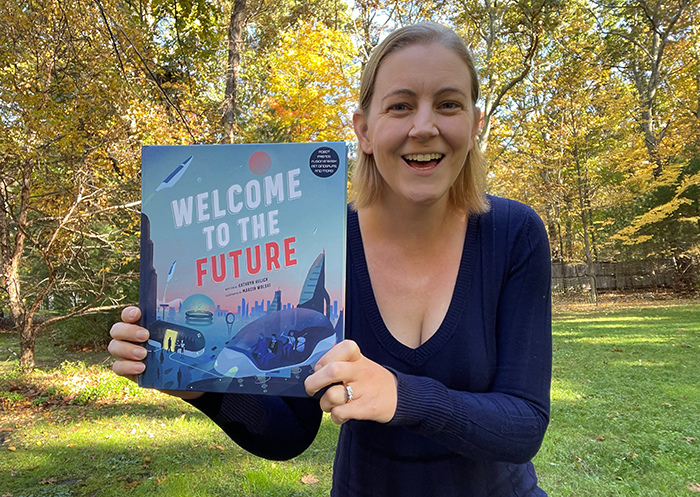 Hulick specializes in writing about science for books and articles aimed at younger audiences. She previously interviewed Ma for a 2018 story on fusion energy for the children’s magazine Muse. “I knew I wanted to talk to her again,” she said.

Hulick pivoted from her original idea of predicting which cool technologies might became realities in the future to focus on various possibilities and the ethical issues they pose.

She also sought to inspire readers to become involved in shaping the futures they want for themselves, their families, and the world.

“Even if you don’t become a scientist, you could become a journalist like me and spread the word that way. You can become involved in politics and make new laws and regulations that could move the world toward these futures.”

Although the book is marketed for school-aged audiences, Hulick wrote it so it’s accessible and interesting to all ages.

“There’s a lot of adults who would benefit from reading it and would enjoy reading it,” she said. “It’s really written for who anyone who is not a scientist or doesn’t have a strong grasp of scientific research.”

Welcome to the Future was released in November by Quarto Publishing.