What would happen to a ballistic missile interceptor or a space reentry vehicle if they encountered a nuclear explosion above the Earth’s atmosphere?

That’s a question U.S. and United Kingdom defense planners hope to answer with the help of a new NIF capability now under development. The Direct Laser Impulse (DLI) project will fire two NIF beams at a target in a large vacuum chamber in the Target Bay to simulate high pulsed x-ray energy from a nuclear burst. The shots will test the survivability of vital strategic defense and weapon delivery systems in an airless nuclear environment. 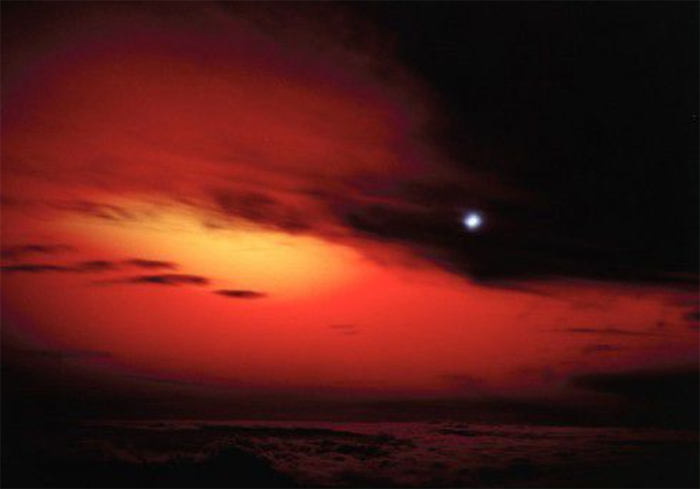 A view of the U.S. Starfish Prime high-altitude nuclear test taken at Maui Station in Hawaii on July 9. 1962. Starfish Prime had an explosive yield of 1.45 megatons and was detonated about 240 miles above the Earth. The burst was among five suborbital tests carried out by the United States during the Cold War to study the effects of nuclear weapons in outer space and high altitudes. The detonation gave off heat and light along with high numbers of x rays and gamma rays. Credit: Los Alamos National Laboratory

“This new test capability will support the development of new materials and structures for our national defense systems,” said John Davis, a scientist with the Nuclear Technologies Department of the U.S. Defense Threat Reduction Agency (DTRA). Davis is leading a joint DLI research and development effort in a partnership with the National Nuclear Security Administration (NNSA) and the United Kingdom’s Atomic Weapons Establishment (AWE). 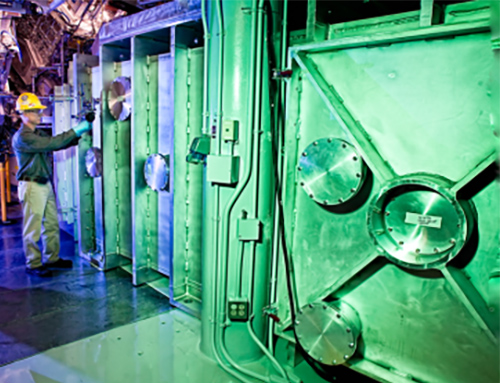 An ARC compressor vessel next to the NIF Target Chamber. ARC, a petawatt-class laser with peak power exceeding one quadrillion (1015) watts, is designed to produce brighter, more penetrating, higher-energy x rays than can be obtained with conventional radiographic techniques. A Nobel Prize-winning technique called chirped pulse amplification boosts the energy of NIF’s laser beams to the petawatt level.

“We evaluated many options on how we could utilize NIF to do direct laser impulse,” said LLNL National Security Applications Program Manager Brent Blue. “We looked at a Target Chamber solution, where you would shine the beams directly on a test object inside the chamber. The problem is these experiments generate a lot of debris. A clean laser environment is not somewhere where you want to have a lot of debris.”

After discarding several other possibilities, “we looked at the empty ARC compressor vessel,” Blue said, “and it was ideal. It will be, in essence, a new target chamber inside NIF to do experiments.”

Mark Bowers, the project’s lead engineer, noted that the two laser beams will be the first NIF beams to hit a target that’s not inside the Target Chamber. They will be operating with a fluence (energy per unit area) of about 20 joules of green laser light per square centimeter. That means up to 30 kilojoules of direct, unfocused energy will illuminate three-dimensional targets as large as 1 cubic foot—much larger than the “coupons” (components or subsystems of larger systems) that have been tested in previous weapon effects simulations.

“The unfocused NIF beams are of high enough intensity,” said Davis, “that they would not have to be focused onto the test objects to achieve the desired effects.”

Davis said when U.S. missile defense and strategic delivery systems are above the atmosphere, they may be subject to large x-ray fluences from an adversary’s nuclear explosion.

“The x rays will be absorbed on the surface of the system and cause high surface temperatures that vaporize exposed materials,” he said. “The vaporized material will ‘blow-off’ with a rocket effect that sends an impulse and intense shocks into the delivery system. The impulse and shocks may potentially cause damage, resulting in possible failure of the system to perform its mission or survive re-entry into the atmosphere.”

Blue noted that the DLI capability will complement current National Security Applications survivability experiments using NIF. “When we do experiments with x rays in the Target Chamber, our samples are limited,” he said. “We’ve only been shooting inch-and-a-half to two-inch-diameter samples. The NIF DLI will allow us to scale that sample size up to a square foot, so we can look at much larger areas, more complex materials and geometries, and three-dimensional shapes.”

NIF, the world’s largest and highest-energy laser facility, can concentrate more than 2 million joules of ultraviolet light from up to 192 laser beams on millimeter-sized targets in the center of the 30-meter-diameter Target Chamber. This enables the precise and reproducible creation of extreme states of matter at temperatures of more than 100 million degrees Celsius and pressures that exceed 100 billion times Earth’s atmosphere. The NIF DLI will be the second most energetic nanosecond-scale laser in the United States and fourth in the world after NIF, the ShenGuang-III laser facility in China, and the Laser MegaJoule in France. 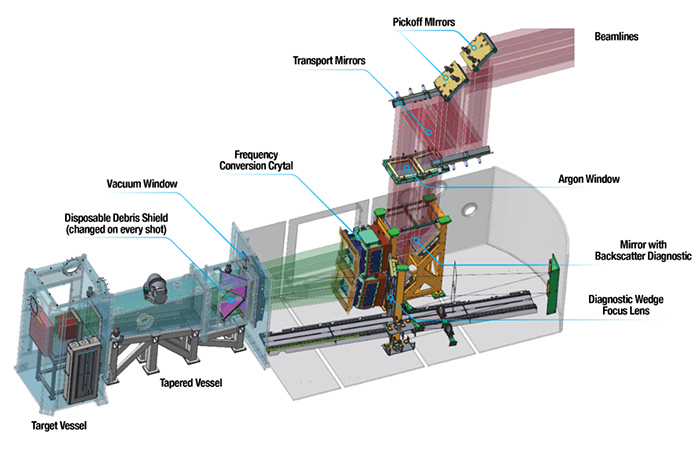 Schematic of the Direct Laser Impulse capability. Two NIF beams (upper right) are diverted by pickoff mirrors from their normal path to the Target Chamber into the second ARC compressor vessel. Transport mirrors in sealed beam enclosures filled with inert argon gas direct the beams to frequency conversion crystals that convert the light from infrared to green. The light then passes through a vacuum window that separates the conversion optics and diagnostics from the target area. Three disposable debris shields protect the optics from target debris.

The DLI system converts NIF’s incident infrared laser light from infrared to green, “not all the way to ultraviolet like NIF does,” Blue said. “We could do our experiments with red, but if you get backscatter it can actually go back up through the amplifier chain and damage the laser. So we convert to green for machine safety reasons.”

This need to protect the optics from multiple sources of backscatter from the large targets was one of several challenges researchers faced in designing the DLI capability, Bowers said.

“DLI’s extended large target means backscattered light comes from almost all directions, and shielding it from coming back is much more difficult than it was on NIF,” he said. “And a lot more energy can come back on DLI than on NIF.”

The larger targets also generate much more debris than NIF targets. “We had to do quite a bit to contain the debris and keep it from damaging the expensive optics,” Bowers said.

Another requirement in designing the DLI capability was making it possible to reconvert the compressor vessel for future use by ARC. “You want to keep a compressor vessel very clean,” Blue said, “so a lot of the design work went into, how can we keep this vessel clean?”

The part of the compressor chamber containing the wavelength conversion optics and diagnostics will be separated from the DLI target chamber area by a vacuum window, confining the debris to the target area. A series of ultra-thick disposable debris shields, specially configured to deflect the debris rather than meet it head-on, will protect the upstream optics from the high-energy debris. Some of the shields will have to be replaced on nearly every shot.

Other complications included developing the technology to keep unconverted infrared light from entering the target area and compensating for the unexpected effect of removing about one-third of the compressor vessel, which destabilized the Target Bay floor. “We had to do a lot of redesign to stiffen up the whole area so that ARC won’t see any impact by adding DLI,” Bowers said.

To lay the foundation for the DLI project, researchers from AWE, DTRA, NNSA and the Naval Research Laboratory (NRL) have been experimenting since 2014 on smaller, kilojoule-class lasers such as AWE’s Orion Laser Facility, the Trident laser at Los Alamos National Laboratory, and the Janus and Optical Sciences lasers at LLNL to study how to directly launch an impulse or shock into a material with a laser.

A final design review for the project was held last summer. Bowers said procurement of components is now under way and installation will begin this spring and continue through the end of this year. Commissioning will occur between late summer and early March of 2022, and the first system shots are scheduled for later that month.

“We’re planning on the capability to have about 20 experiments per year,” said Blue. “A few years ago when NIF did more than 400 shots, those beams were not used more than 100 times. You could have potentially more than 100 shot opportunities to use this exciting new test capability for national security. Users have already been submitting shot time requests to address their urgent concerns.”