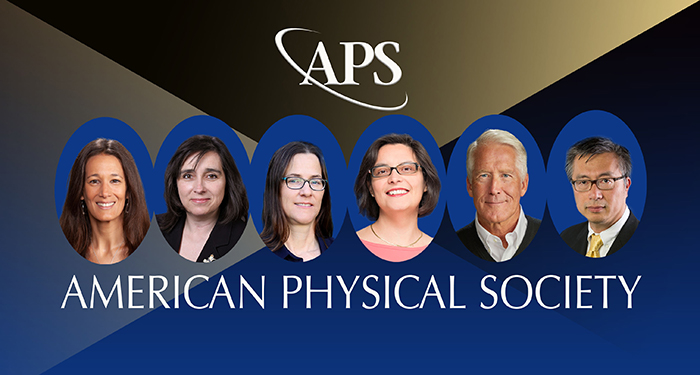 Since 1921, the APS has annually elected members to the status of fellows to recognize those “who have made exceptional contributions to the physics enterprise in physics research, important applications of physics, leadership in or service to physics, or significant contributions to physics education.”

Félicie Albert, staff scientist and deputy director of LLNL’s Center for High Energy Density Science. She was cited “for many original contributions to the development of directional x-ray beams for probing high energy density matter.” In July, Albert received a Presidential Early Career Award for Scientists and Engineers and was named a senior member of The Optical Society.

Kimberly Budil, principal associate director for Weapons & Complex Integration (WCI), “for extraordinary leadership in developing national security partnerships between laboratories, academia, and governments, and for promoting diversity in science.” Budil, who joined LLNL as a graduate student in Laser Programs in 1987, has held roles of increasing management responsibility across LLNL programs including NIF, WCI, Global Security, and Physical and Life Sciences.

Harry Robey, LLNL physicist, who was cited for “significant advances
in the understanding of complex hydrodynamics in inertial confinement fusion
and high energy density plasmas, and for leadership in the design and execution of experiments on the National Ignition Facility.”

Ye Zhou, LLNL physicist, “for seminal contributions to understanding the evolution of turbulent interfaces from the weakly nonlinear to fully turbulent regimes relevant to the micro-scales of laser experiments, and the inertial confinement fusion to the mega-scales of supernova explosions, space physics, and astrophysics.”

Carolyn Kuranz, director of laboratory astrophysics, University of Michigan Center for Laser Experimental Astrophysics Research. Kuranz, associate professor of nuclear engineering and radiological sciences, was cited for spearheading academic use of NIF for “seminal experiments in plasma laboratory astrophysics, specifically the effects of locally generated intense radiation on an interface and on astrophysically relevant interfacial instabilities.”

Other LLNL scientists named as APS Fellows were:

Jutta Escher, research scientist, Physical & Life Sciences nuclear and chemical sciences division, “for developing the theoretical framework required to validate the surrogate reaction method for neutron-induced reactions, and for leading the applications of these methods to address important questions in nuclear astrophysics and stewardship science.”

Sofia Quaglioni, P&LS deputy group leader, nuclear data and theory, “for contributions to unifying theories for the structure and dynamics of light nuclei by elucidating the role of the continuum in weakly bound nuclei, and the inclusion of three-body final states and three-nucleon interactions within reaction dynamics.”

The fellowships are awarded after an extensive review and are considered a distinct honor because the evaluation process, conducted by fellowship committees of individual divisions, topical groups, and forums, relies on nomination and recommendation by one’s professional peers. No more than one half of one percent of the society’s membership is elected to the status of fellow each year.