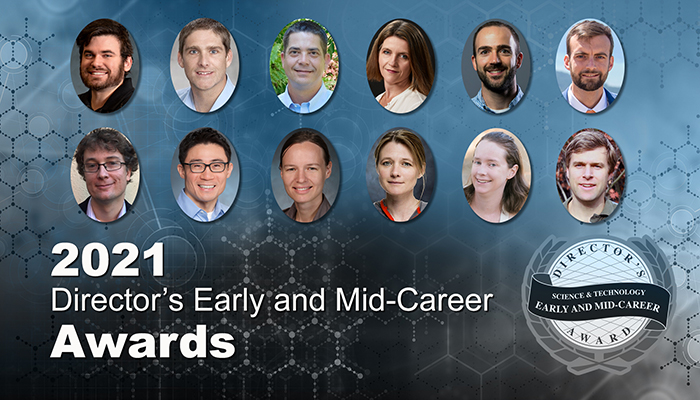 LLNL Director Kim Budil announced that 12 LLNL scientists and engineers were selected as award recipients for the 2021 Early and Mid-Career Recognition (EMCR) Program, which recognizes scientific and technical accomplishments, leadership, and future promise demonstrated by Lab scientists and engineers early in their careers—four to 16 years since they received their most recent degree.

“Our early and mid-career staff are our future leaders,” Budil said. “Through these awards, we recognize their exceptional accomplishments and provide an opportunity to further enhance their careers at the Lab.”

Winners receive a cash award and institutional funding (approximately equivalent to 20 percent support for one year) to pursue research activities in their area of interest.

The 2021 EMCR winners include:

Jason Chou has had a remarkable career as a subject matter expert and pioneer in radio frequency photonics. This is a novel field that combines high-speed electronics and ultra-fast optics to target high-performance applications that cannot be met by either discipline alone.

He has been directly responsible for growing and developing this new field within the NIF&PS Department of Defense Technologies (DODT) program, targeting high-speed, high-dynamic range applications including diagnostic instrumentation, radar, and secure communications. He has attracted both internal and external hires to come and join the enterprise, acting as a thoughtful leader and a career mentor.

Chou has been at the Lab for 11 years and now serves as the group leader for radio-frequency (RF) photonics.

Upon hearing of the award, Chou said: “It’s really a result of all the talented people I’ve worked with over the years at the Lab. Real progress doesn’t happen with just one person, it’s always a team effort. This award is a testament to the dedication, inspiration, and perspiration of so many. I am truly blessed for the vast number of opportunities and amazing people I get to be surrounded by each day at LLNL.”

With his award money, he plans to further study the how light can be used to improve the way we communicate and meet national security needs across the electromagnetic spectrum. One extremely interesting area for Chou is the potential of integrated RF photonics, aimed at lowering size, weight, power, and cost. He also would like to build strategic partnerships with universities, industry, and other government labs to further advance the innovative technologies the Lab is developing in the RF photonics group.

Amy (Lazicki) Jenei, a Physical and Life Sciences physicist and the project leader for the plasma equation-of-state (EOS) program in Weapons Physics and Design (WPD) for more than five years. Jenei was the lead author of a study, published earlier this year in Nature, that used NIF to successfully measure carbon at pressures reaching 2,000 GPa—5 times the pressure in Earth’s core (see “Experiments at NIF Probe Carbon at Record Pressures”).

She is innovative in her approach to acquire high-pressure plasma EOS data in support of WCI programs and stockpile stewardship efforts. Jenei started her Lab career in 2004 as a grad student, went on to become a postdoctoral researcher in 2010, and now is a staff physicist studying material properties at extreme conditions.

“I was surprised and very honored to get this recognition,” she said.

Since joining LLNL in 2011 as a postdoctoral researcher, Jeremy Lenhardt has made significant contributions to multiple programmatic areas critical to national security, including NIF target materials (JX foams), the creation of additive manufacturing (AM) resins (DIW Inks), the formulation of a new chemically blown foam for a critical weapon component, the development of alternative methods for adding porosity to AM elastomers, and the identification of critical deficiencies and fixes for the production of cellular silicone gumstocks.

The JX foams Lenhardt created in his early time at LLNL are used in the fabrication of NIF targets today. The “Llama” series of DIW resins have been extensively used by LLNL and the Kansas City National Security Complex for development of weapon components, including approximately 25 combined in the W80-4 Stockpile Life Extension Program (LEP) and W87-1 Warhead Modification Program. New blown foams are used in a critical LEP component.

“I am incredibly grateful to be at such an incredible laboratory—winning this award would not be possible without the support and work of fellow scientists across the lab,” said Lenhardt, who is now the deputy group leader in the High Performance Materials group in the Physical and Life Sciences Directorate’s Material Science Division.

With the award funding, he plans to look for opportunities to marry polymer additive manufacturing with the field of polymer mechanochemistry. He said by using non-traditional AM scaffolds, we can now have the advantage of directing chemistry through the application of mechanical force. This has implications in self-healing, self-reporting, and elastomers.

Chris Weber has maintained a steady pace of significant technical accomplishments and innovative program contributions. In his nine years at the Lab, Weber has already played a leading role in more than a half-dozen different projects within LLNL’s ICF program.

His surprising discovery of the importance of viscosity in NIF hot spots changed the inertial confinement fusion (ICF) communities’ view of the character of ICF implosions. His high-resolution, 3D simulations showed that NIF hot spots are in fact highly viscous and essentially precluded the formation of turbulence under NIF implosion conditions. This discovery represents an important scientific contribution to the understanding of ICF and to the ICF community.

“I’m honored to be recognized,” he said. “It makes me think of the countless mentors and peers that have helped my work and inspired me. I still remember going to my first few technical meetings here as a new hire and being energized by the level of discussion and the collaborative atmosphere.”

With additional funds, Weber would like to build on the 1.3 megajoule NIF experiment with applications to energy or stockpile stewardship.

Alex Zylstra came to LLNL as an ICF/HED experimentalist from Los Alamos National Laboratory (LANL) three years ago, where he served as a distinguished postdoc. A participant in the NIF-MIT Ph.D. Thesis Program, he was hired by LLNL in September 2018. During his time as a LANL postdoc, Zylstra was experimental lead for the beryllium implosion campaign on NIF.

He is the top class of ICF Program experimentalists, showing a deep level of understanding about ICF implosions. Through his work, he positioned himself to be experimental lead of the ICF program’s “Hybrid-E” implosion effort, an effort which attempts to take the best elements of past designs and utilize the Lab’s data-based understanding of the key physics factors that control symmetry and performance to position the ICF Program to field large-scale (>1,000 micron inner radius capsules) ignition-relevant implosions that utilize NIF’s full power and energy capacity. The recent results from the Hybrid-E campaign will be the biggest results in the fusion community this year and perhaps this decade.

“I’m very grateful and happy to receive an early career award from the Lab,” Zystra said. “It is gratifying to have my work recognized; these projects are a team effort, so I also am very thankful for my many colleagues and team members that have made all of my work possible.”

As an ICF expert, Zystra plans to expand on his work with the award funding. “This is an extremely exciting time for the ICF community with our recent results from NIF,” he said. “I’m quite interested in exploring how we can use these high-yield implosions to study science beyond the fusion program, such as novel nuclear physics and astrophysics, and the institutional funding is a great opportunity to support this kind of work.”