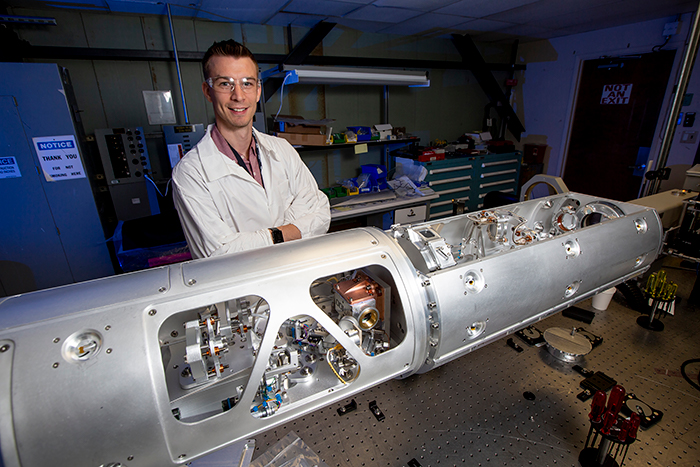 NIF&PS Summer Scholar Peter Nyholm’s work was vital to commission the Optical Thomson Scattering diagnostic, which will be used on many NIF experiment. Credit: Jason Laurea

When Peter Nyholm became a NIF&PS Summer Scholar, he was following family tradition. Both of his parents had careers at Lawrence Livermore National Laboratory—his father as an electrical engineer and his mother as a nurse. Of his five siblings, two currently work at LLNL and another was previously an intern. This summer, Peter’s wife was also an intern in the Data Science Summer Institute.

“Growing up in Livermore, the Lab was a big presence,” he said. “I was fascinated by the work that my father did here. I always knew I wanted to become an engineer.”

In addition to the family history, Nyholm was drawn to LLNL for the opportunity to experience cutting-edge science in electrical engineering and optics. “I’m very interested in optics. It’s my favorite aspect of physics,” he said. “NIF is the place to be for optics.”

This is Nyholm’s second year as a NIF&PS Summer Scholar. Last year under the guidance of Phil Datte and George Swadling, Peter worked on the design of a vacuum ultraviolet spectral efficiency calibration for an Optical Thomson Scattering (OTS) diagnostic (see “Probing the Mysteries of Hohlraum Plasmas”).

“Peter’s work as a Summer Scholar is vital to our effort in calibrating the OTS diagnostic,” said Swadling. “A high-quality calibration measurement will be essential in order to extract accurate measurements from the raw data recorded by the Thomson scattering diagnostic.”

The OTS diagnostic will measure characteristics of the plasma generated when NIF’s laser beams enter a hohlraum. The plasma interacts with the beams and causes backscatter that can drain the laser energy needed to symmetrically implode the fuel capsule. Such measurements could provide critical insight into NIF hohlraum physics, which could lead to better implosions. It is undergoing commissioning and will begin collecting data later this year.

Nyholm continued working on the calibration design in his second summer but was also tasked with helping assemble and align the new OTS diagnostic when that team was short-staffed. For Peter, this presented another opportunity for learning.

“I was thrown into a lot of different tasks this summer, which was great. Every time I was exposed to something new, there was always another expert I could ask questions of,” he said. “The opportunities for learning at the Lab are limitless as long as you are willing to ask. You can feel like a small fish in a very big pond, but everyone is very generous with their time in explaining concepts to a college student.”

Nyholm’s willingness to ask questions and take the initiative was not lost on his mentors. “He’s really the epitome of what we want out of a summer student,” said Datte. “He’s very capable technically and self-motivated.”

Swadling was impressed with how much Nyholm’s understanding of optical measurements improved over two summers. “He’s very quick at picking up on things,” he said. “Vacuum calibration is a very challenging measurement. We’ve already gotten good data from his work.”

Nyholm was thrilled to work on such a high-impact project. “I didn’t expect to work on something so significant,” he said. “Making measurements to analyze the plasma generated on NIF – that’s part of nearly every experiment.” 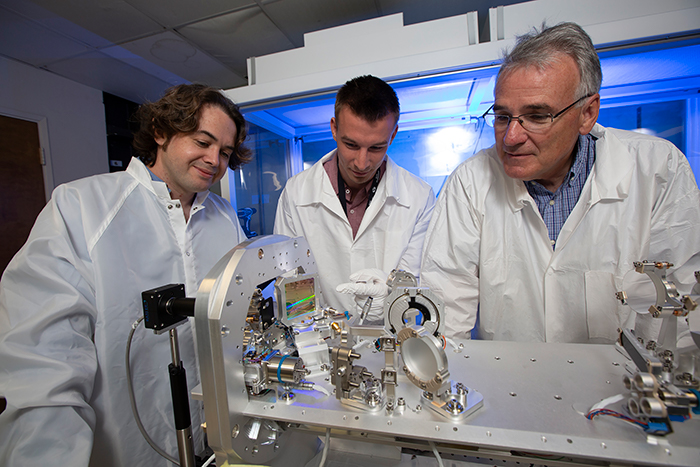 Peter Nyholm’s mentors, George Swadling (left) and Phil Datte (right), describe him as “the epitome of what we want in a summer student”. Credit: Jason Laurea

Back at BYU, Nyholm is working on his master’s thesis. He’s part of a research project to develop a new method for 3D photoelectrochemical etching of semiconductor materials, in particular silicon carbide. Being chemically inert and having a hardness close to diamond, silicon carbide is very difficult to etch but has many characteristics that make it an excellent material for semiconductor, microelectromechanical (MEMS), and optics systems. Nyholm is working on the optics and etch chamber design used in this new method.

Nyholm has no doubts about his career aspirations. After completing his master’s, he hopes to join the “family business” and put his electrical engineering degrees to use as part of the LLNL staff.

“The opportunities I’ve had as an intern have shown me what’s possible at LLNL,” he says. “I can’t imagine working anywhere else.”