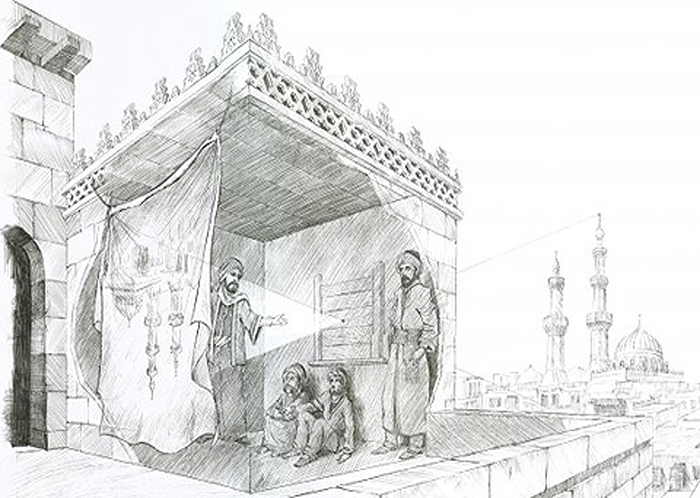 This drawing depicts Ibn al-Haytham conducting the first science experiment on the properties of light. Courtesy of Mohammad Karim.

More than a thousand years ago, scholar Ibn al-Haytham became fascinated by the properties of light. To test his theories, he designed systematic methods for conducting what historians call the world’s first science experiments.

He was under house arrest in Egypt at the time, but that didn’t stop al-Haytham from talking his jailer into allowing him to prove how light traveled in straight paths and how the human eye perceives light. His Book of Optics, released in 1021, eventually influenced Renaissance paintings and presaged the first rudimentary photographic cameras centuries later.

And today, the National Ignition Facility’s ongoing advancements in optics technology and photon sciences can be directly traced back to al-Haytham’s pursuit of knowledge and truth, “which also happens to be the first experiment in optics and photonics,” University of Massachusetts Dartmouth Professor Mohammad Karim said during a recent virtual guest seminar for NIF employees. 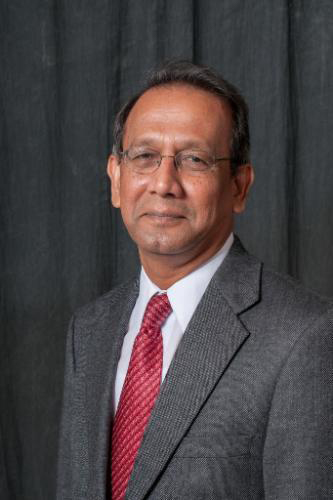 “All he was trying to prove is that light rays coming through a pinhole would (create) an inverted image on the screen,” Karim said during a video conference. “Imagine, a thousand years later, we have fiber optic cable. We can send 20,000, 30,000, 40,000 signals through a cable. One signal is not interfering with another signal. These observations were made by him that early.”

Wisoff noted the seminar’s topic was particularly pertinent for researchers at the home of the world’s largest and most energetic laser, where work on advanced optical technologies, optics materials, and powerful laser light supports NIF’s important missions of national security, energy security, and Discovery Science.

“As one of the centers of laser and optics activities in the United States, we all understand how much we build on previous knowledge and how important it is that science is the pursuit of the truth, that it’s bootstrapped on the people who came before us,” Wisoff said.

In a wide-ranging talk held in July, Karim outlined several centuries worth of often-overlooked mathematical and scientific advances along the ancient Silk Road trade route from Europe to China.

He included Liu Hui (220-280), a third-century Chinese mathematician who came up with an algorithm for calculating pi, and Indian mathematicians Brahmagupta (598–670), who defined zero as the result of subtracting a number from itself, and Al Khwārizmī (780-850), sometimes called the “Father of Algebra” for his work titled, The Condensed Book on the Calculation of al-Jabr and al-Muqabala, written around 825.

“The story of photonics and optics is nothing but hundreds and thousands of people working over multiple continents,” Karim said.

All that knowledge began to coalesce for the first time, Karim said, with the establishment of the Bayt al-Hikmah, or “House of Wisdom,” in ninth-century Baghdad. This launched an “age of organized research” by curating a vast library devoted to the translation and preservation of Persian, Syriac, Sanskrit, and Greek research in mathematics, astronomy, and philosophy. 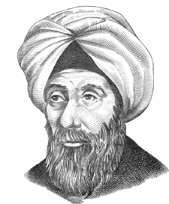 The library attracted scholars like al-Haytham from different faiths and nationalities. “It was like a National Science Foundation of those days,” Karim said.

Some historians call al-Haytham the “Father of Modern Optics.” Born in 965 in Basra in what is now southern Iraq, al-Haytham studied the works of Greek legends like Aristotle and Ptolemy and devoted his life to studying the physical world. He studied optics, astronomy, geometry, mechanics, water clocks, medicine, anatomy, business arithmetic, and civil engineering.

His work on water flow and irrigation for farmers in Basra led to an invitation to Egypt around 1010 by al-Ḥākim bi-Amr Allāh, the country’s Fatimid caliph who sought a genius engineer to build a dam on the Nile to control annual flooding problems.

Al-Haytham identified a spot where the Aswan High Dam was eventually built in the 1960s. But he feared for his life when he realized he had to tell the mercurial al-Ḥākim that the technology to build such a dam was not available in the 11th century, Karim said.

“He then faked he had lost his mind to get out of this fix,” Karim said. “He was arrested, put in house arrest in Cairo.”

Karim said this decade of captivity proved to be al-Haytham’s “most productive.” He worked on the Kitab al-Manazir, or Book of Optics, a seven-volume book on vision, eye anatomy, and light propagation, reflection, and refraction.

Al-Haytham wanted to demonstrate how light passing through a small pinhole into a dark room produced an inverted image of an object. “Naturalists prior to al-Haytham had observed this type of effect, for instance, via sunlight travelling through gaps in the leaves,” Karim said. “But no one had studied it systematically.”

Al-Haytham convinced his jailer to let him use a small, dark room. He hung a blanket opposite from a window with only a small pinhole to let in light. This first pinhole camera, or camera obscura, projected the inverted image of two minarets from a nearby mosque onto the blanket, which acted as a screen.

“He kept repeating his experiment over and over again,” Karim said. “Each time he would move the position of the screen, he would see the size of the inverted image also keep moving and changing. So he’s also formulating the idea of proportion, converting and proving the idea of sine, cosine, tangent, and cotangent.” 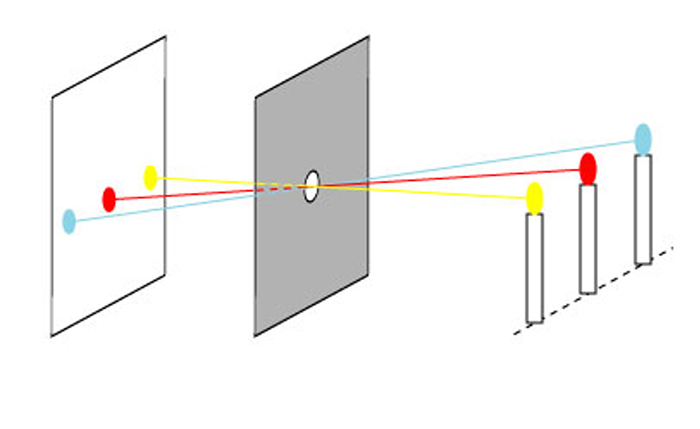 He also used lamps as multiple light sources to demonstrate how light followed straight-line paths through a pinhole. He understood the importance of crosstalk because he showed the light rays did not interfere with each other at the pinhole. If the rays had mingled, they would not have been distinguishable on the other side, Karim said.

Al-Haytham was released in 1021. He died in 1040, but his book became required reading at the University of Paris more than two centuries later under his Latinized name Alhazen, or Alhacen. The book served as a reference for light and vision for medieval scholar Roger Bacon, while its concepts of light-ray tracing influenced how Renaissance artists translated real-world 3-D scenes into 2-D paintings, Karim noted.

The story of al-Haytham and the research leading to and from these initial experiments shows that science “is not a sector commanded by anyone, although history books, politicians, and others would like to tell us a different story,” Karim said. “Knowledge does not belong to any particular people. We all are indebted to everybody.”

He added that scientists are always looking for truth. “The more we know truth, we’ll actually be better in science,” he said.