Former LLNL director John Nuckolls, father of the Laboratory’s laser program and founder of the inertial confinement fusion (ICF) approach to studying thermonuclear fusion in the laboratory, is the 2018 recipient of the John S. Foster Jr. Medal.

Seven laboratory directors and an Air Force general were present on Nov. 8 to pay tribute to one of LLNL’s most prolific innovators and visionary leaders. Colleagues of Nuckolls took turns sharing stories of his innovations in thermonuclear explosive design and his visionary leadership of the Laboratory as director in an era of tremendous geopolitical uncertainty. 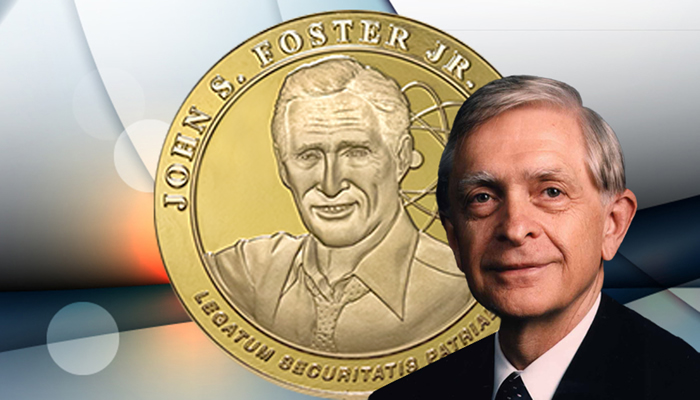 But it was the unassuming 87-year-old Nuckolls who stole the show when he graciously accepted the fourth annual John S. Foster Jr. Medal with an apology to the medal’s namesake.

“When I found out about this award, I thought about how I promised Foster in 1960 that we would get ignition,” said Nuckolls from the podium, his medal draped around his neck. His gaze turned to Foster, the medal’s namesake, who was LLNL director when Nuckolls was an up-and-coming designer. “My first thought was that I’m not ready for this award yet. Johnny, I’m sorry we have not gotten ignition yet. But we’re close.”

Established by Lawrence Livermore National Security, LLC, and bestowed on an annual basis by the LLNL director, the Foster medal recognizes an individual for exceptional leadership in scientific, technical and engineering development and policy formulation in support of U.S. nuclear security.

Nuckolls is best known as the seventh director of the Laboratory, the driving force behind the birth of the laser program at LLNL, and as one of the most innovative thermonuclear designers of the atmospheric test era. He catalyzed the emergence of LLNL as a state-of-the art research institution as associate director for physics. When he became director in 1988, Nuckolls created the Nonproliferation and Arms Control Directorate, the predecessor to the Global Security Directorate; he established the first Lab exchange visits with LLNL’s Russian counterparts; and he took the crucial first steps in beginning the process that would lead to the National Ignition Facility.

Compressing hydrogen has long been Nuckolls’ life mission. After more than six decades, he still comes to work five days a week, driven by the scientific challenge of ICF—using lasers to compress a tiny capsule of thermonuclear fuel to such high densities and temperatures that the atoms fuse and “ignite” in a self-sustaining series of nuclear reactions.

But ICF isn’t the only grand challenge Nuckolls has taken on. He first made a name for himself compressing thermonuclear fuel at a grand scale.

It was the height of the Cold War, and Soviet Premier Nikita Khrushchev had just backed out of a short-lived nuclear test moratorium. Foster, then director of the Laboratory, had set out a vision for staff to “run so fast that anything the Soviets built would be obsolete.” Word had gotten around that Nuckolls had a number of outside-the-box ideas, and he fielded a new thermonuclear weapon design in an atmospheric nuclear test.

Although his proof-of-principle test was an astonishing success, his maximum-yield test fizzled. But Nuckolls wasn’t ready to give up on the design so easily. He analyzed possible failure modes, made a few tweaks, and tested it one month later in the October 1962 Housatonic nuclear test at Johnson Island in the Pacific Ocean. It was a resounding success and validation for a concept that would ultimately enable game-changing missile defense systems for the United States.

“It’s a shame that most people only know John for fathering the field of ICF,” said former LLNL director George Miller during the ceremony. “His weapons ideas led to the Sprint and Spartan anti-ballistic missile systems, and he wrote the first code to ensure containment of underground nuclear tests. As director, he championed improving the safety and security of the stockpile, even though it was a political football.” 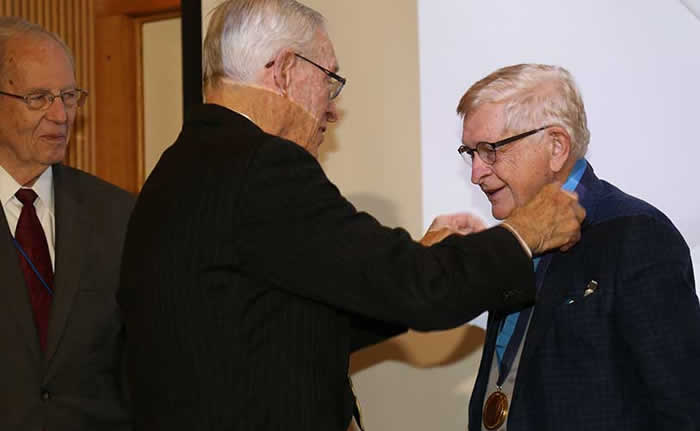 Goldstein shared a story about how Nuckolls interviewed him when he was a prospective employee of the Laboratory, and how he just barely impressed Nuckolls enough to get hired as a flex-term employee. He also spoke about the excitement he saw in Nuckolls’ eyes when the ignition campaign at the National Ignition Facility surfaced new physics mysteries to be solved.

“He has always been an intellectual leader who thinks outside the box,” Goldstein said. “He never even knew there was a box. He embodies the way the Laboratory takes on problems.”

Nuckolls’ intellect was a common theme of the remarks, as was the reverence he commanded for asking the most difficult questions during design reviews. Wood said Nuckolls insisted that designs be modeled in detail before an experiment and that the experimental results be compared with predictions and differences reconciled before moving on to a new design. He also shared stories of traveling to the White House with Nuckolls to discuss the Strategic Defense Initiative, also known as “Star Wars.”

Max spoke of Nuckolls’ innate ability to come up with innovative new ideas for seemingly intractable problems. She also shared how Nuckolls pressed for equality of pay between men and women long before it became a common practice.

“As director,” Tarter said, “he was the first at any laboratory to envision the post-Cold War geopolitical structure, and he knew how to position the Laboratory to address the challenges that that future would present. He also held the Laboratory together while weapon budgets were collapsing, and he laid the foundation for the NIF.”

Achieving controlled fusion ignition in a laboratory may be one of the greatest scientific challenges ever attempted, and it is a challenge that has captured Nuckolls’ imagination and focus since he made that promise to Foster in 1968. His tenacity speaks to what may be his greatest hallmark: He will never give up on a grand challenge.

“Sometimes people ask me in the elevator, ‘Why are you still here? When are you leaving?’” Nuckolls said while accepting the award. “I’m going to be here until we get ignition.”

The annual award is presented by AIP (American Institute of Physics) Publishing, in collaboration with the American Physical Society (APS) Division of Plasma Physics, to recognize outstanding plasma physics research by an author published in the journal Physics of Plasmas. 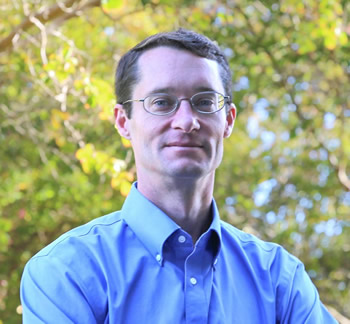 The Physics of Plasmas editorial board selected Clark from among “the most highly cited and top downloaded articles from Physics of Plasmas during the past five years.” His paper, “Detailed implosion modeling of deuterium-tritium layered experiments on the National Ignition Facility,” reported state-of-the-art, high-resolution 3D modeling of National Ignition Campaign implosions that continues to guide implosion design today, with its detailed incorporation of all known sources of hydrodynamic perturbation and drive asymmetry.

The scientific challenge of nuclear fusion ignition within the laboratory was “irresistible” for Clark, who joined LLNL straight out of graduate school. “The paper was written at the beginning of the National Ignition Campaign, and things weren’t going as expected,” Clark said. “It was an attempt to see if we could explain what was happening.”

The work described in the paper didn’t successfully model the data, but it led to the development of models with a predictive capability that Clark and colleagues published in two subsequent papers: “Radiation hydrodynamics modeling of the highest compression inertial confinement fusion ignition experiment from the National Ignition Campaign” and “Three-dimensional simulations of low foot and high foot implosion experiments on the National Ignition Facility.”

“We were advancing the frontier in modeling and in how we understood these implosions,” Clark said, explaining that the model has “continued to evolve,” improving in fidelity as researchers add in more effects.

Clark said he was surprised when he got the call about the award, describing Ronald Davidson as a “titan of plasma physics” he had the privilege to learn from in graduate school. “It’s awesome to get recognized by something that bears his name,” said Clark, who has agreed to write a prospectus article for Physics of Plasmas.

The award, which includes a cash prize of $5,000, was presented to Clark on Nov. 5 during the Physics of Plasmas reception at the APS Division of Plasma Physics Meeting in Portland, OR, held in honor of the authors and invited speakers. 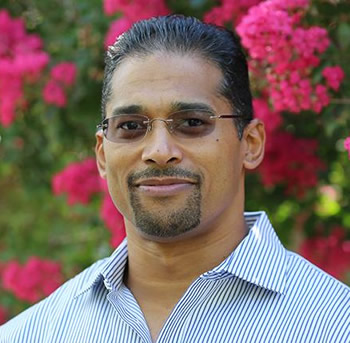 The annual program recognizes customers and partners for exceptional use of Oracle solutions to accelerate innovation and drive business transformation and value by increasing agility, lowering costs, and reducing IT complexity. Each year, the winners are chosen from hundreds of nominations that come in from across the globe. Adams was recognized in the Leadership in Infrastructure Transformation category.

Adams joined LLNL in 2003 as the database/technical lead, where he led the database administration efforts for more than 120 development, test, and production databases. In 2007 he became enterprise/middleware/solutions architect, which included responsibility for leading the development and application operations of software development organization, specifically around database and infrastructure. In 2010 he transitioned into lead IT architect and manager for servers and storage.

Prior to joining LLNL Adams provided Oracle database administration to the U.S. States Coast Guard Finance Center, Coast Guard headquarters, Sendmail Inc., and E-Loan Inc. He studied electrical engineering at San Jose State University, holds a number of technical certificates from Splunk, Oracle, Citrix, and other organizations, and has given presentations on a variety of database and data management topics at major industry conferences.