When he was 20 years old Andy Bayramian came to LLNL as a summer intern, intent on changing the world. Two decades and three groundbreaking lasers later, he’s still here.

And to the 47 NIF & Photon Science summer scholars now on site and working one-on-one with mentors—much as Bayramian did as an intern—he offers this advice:

“Get involved. If you are, people will help you. This is the world’s best place to work because you get to make a difference. We’re setting records and making things that are unheard of in the rest of the world,” added Bayramian, now a physicist in the Advanced Photon Technologies Program. 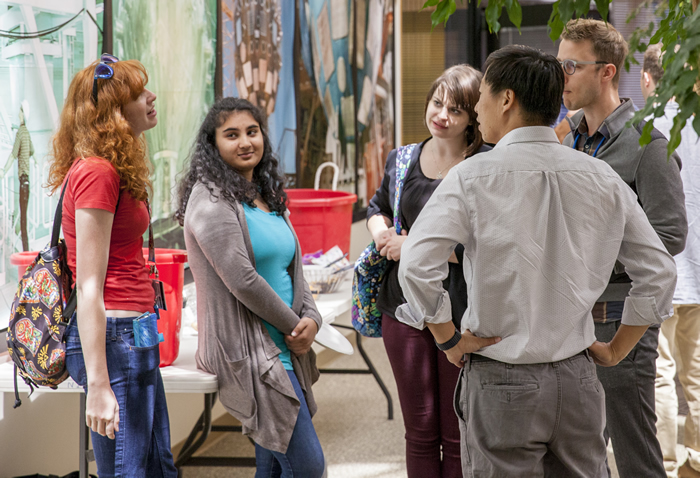 The Laboratory has a long-standing tradition of working with students of all ages and stages of their academic development. The NIF & PS Summer Scholar Program has taken that internship tradition and formalized it into a program created by laser physicist Zhi Liao, a former Lab intern himself.

“I wanted to give the students a meaningful collaborative experience to build relationships with their peers,” explained Liao, who has contributed to many of LLNL’s successful laser projects including NIF, the Mercury high-repetition-rate laser, and the Laser Guide Star. With his passion for training next-generation scientists and engineers, Liao has moved into a leadership position at NIF & PS in workforce development initiatives.

The current Summer Scholar Program director is Derrek “Reggie” Drachenberg, a NIF & PS fiber-laser scientist who has worked on high-profile research teams including one that won a prestigious R&D 100 Award for innovation. He now leads an exploratory research project to develop high-power lasers at retina-safe wavelengths.

The summer scholars work on independent research projects matched to the students’ areas of academic interest and LLNL needs, ranging from high energy density (HED) physics and national security applications to optics, mathematics, and a variety of engineering disciplines. They produce scientific research posters that will be on display in early August, following the scientific practice. Profiles of several students will appear in future editions of NIF & Photon Science News. 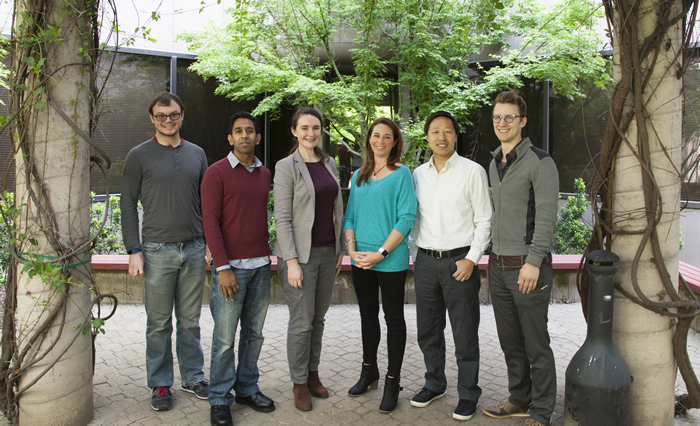 Drachenberg works with a team of NIF & PS scientists including Louisa Pickworth, an HED diagnostics scientist, who runs the Summer Scholar Seminar series; Rajesh Raman, who studies laser-materials interactions and organizes outside tours; and Sam Schrauth, a NIF postdoctoral student who works on laser propagation simulations and organizes the on-site career panel. Krista Ladner from the NIF & PS Directorate Office provides administrative support across the program.

This summer’s students range in age from occasional high school students to undergraduates and graduate students. Their compensation runs from $3,000 to $6,000 per month except for ROTC, active-duty military, and military service academy students.

“As part of our effort to expand the program,” said Jeff Atherton, NIF & PS principal deputy principal associate director, “we have focused on enhancing diversity, including engagement with Norfolk State University, which has programs that align with the Lab’s. This year we have about 30 percent female and minority participation—an encouraging step in the right direction,” he said. 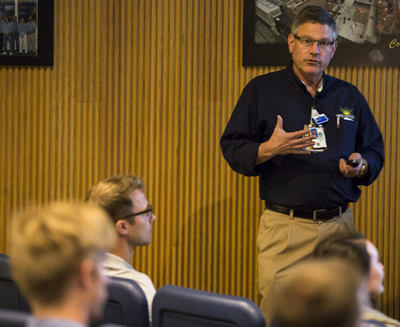 “The students really respond to the weekly seminars,” said Drachenberg, “getting together with everyone else and hearing about programs that are different from what they might be working on in their own lab.” Plus, he brings cookies.

Drachenberg works with Liao to help provide the program with more enrichment for their eight- to 12-week programs with the help of outreach administrator Krista Ladner. Drachenberg is building a private social media network as well, for current and former students to communicate and to track alumni.

The NIF & PS internships are keenly competitive, with only about 10 percent of applicants generally gaining acceptance. What attracted Bayramian to apply when he was an undergraduate at Montana State University was the prospect of working on lasers and fusion, which he had been fascinated with since high school.

While working at the Lab on laser programs, Bayramian became a lead architect for the High-Repetition-Rate Advanced Petawatt Laser System (HAPLS), the world’s highest-average-power diode-pumped titanium-sapphire laser. HAPLS set a world record for diode-pumped petawatt lasers, and with completion of this milestone, the system has been crated and delivered to the Czech Republic for integration into the European Extreme Light Infrastructure Beamlines Facility.

As former intern Bayramian prepared to head overseas with the LLNL HAPLS team to help with the integration, he said, “I want to help the country, that’s the original reason I came here. And what’s great is that’s still the reason I’m at the Lab.”

LLNL physicist Félicie Albert has received the 2017 Katherine E. Weimer Award from the American Physical Society (APS) Division of Plasma Physics (DPP). The award will be presented during the DPP annual meeting the week of Oct. 23-27 in Wisconsin. 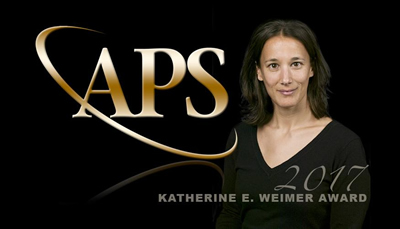 Albert was recognized for “pioneering development and characterization of x-ray sources from laser-wakefield accelerators and Compton scattering gamma-ray sources for applications in high energy density science and nuclear resonance fluorescence.”

The award honors Katherine Weimer, a pioneering research physicist at the Princeton Plasma Physics Laboratory at Princeton University. It was established by DPP to recognize and encourage outstanding achievement in plasma science research by a woman physicist in the early years of her career.

“I feel honored and humbled to have received this award because I join a list of previous recipients who I respect a lot,” Albert said. “It encourages women to have thriving careers in physics. I am grateful to the American Physical Society Division of Plasma Physics for doing that.

“Perhaps the most important of it all,” she said, “is that although this is an individual award, I would never have received it without the support of my many colleagues and mentors. From mentors who have guided me to my group leader who nominated me, to my colleagues at the Lab who have been through tough experiments, lively scientific discussions and paper writing sessions with me, I have had an incredible support system that led to this recognition.”

Albert, an expert in ultrafast x-ray sources and laser-plasma interactions, joined the Lab as a postdoctoral researcher in 2008. She was selected by APS as an outstanding referee as well as the Laboratory’s Early and Mid-Career Recognition (EMCR) Program in 2015. She received an Early Career Research Program award from the Office of Fusion Energy Sciences in 2016. Her research has been funded by the Lab’s Laboratory Directed Research and Development program and the Department of Energy’s Office of Science and Office of Fusion Energy Sciences. 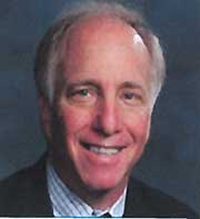 The IEEE’s Nuclear and Plasma Sciences Society (NPSS) honored Friedman for his “contributions to the science and practice of computational physics, including the development of novel methods and effective computer codes, and their application to fusion plasmas and particle beams.”

“(Charles) ‘Ned’ Birdsall was a pioneer in the field of plasma simulation, a key mentor early in my career and a good friend,” Friedman said. “I’m truly honored to receive the award that bears his name.”

Friedman is the third person to receive the Birdsall Award, which focuses on plasma physics encompassing the interaction of charged particles and electromagnetic fields. The award comes with $2,000 and a plaque to be presented at an upcoming IEEE NPSS conference.

Friedman is a past recipient of LLNL’s Distinguished Achievement Award in physics and an American Physical Society fellow. His career includes work on laser-driven inertial fusion, heavy ion-driven inertial fusion, magnetically confined fusion, plasma physics, accelerator physics, computer simulation and numerical analysis, among other pursuits. He is also known for inventing and developing simulation methods for plasmas and particle beams, and was the originator of the open-source particle-in-cell simulation code Warp, according to IEEE NPSS.

LLNL physicist Craig Siders has been named a senior member of the Optical Society of America (OSA), an international society for optics and photonics scientists, engineers, educators, and business leaders. Senior membership status recognizes members with more than 10 years of significant experience and professional accomplishments or service within the optics and photonics field. 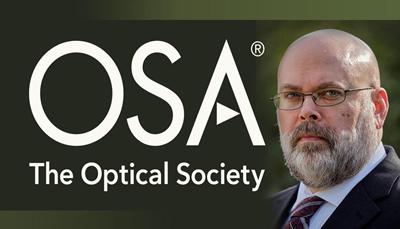 Siders has been part of the NIF and Photon Science Directorate since 2005. As commercial technology development leader, he fosters the growth of commercial opportunities within the Advanced Photon Technologies (APT) Program, and as senior scientist he engages in the evaluation and development of technologies toward future advanced photon sources and their applications.

“I am honored for this recognition by the Optical Society of America of the diverse and widely impactful career I have had to date,” Siders said. “I look forward to the great things still to come from working with my colleagues past, present and future.”

Before joining LLNL, Siders was an assistant professor of optics, photonics and physics at the College of Optics and Photonics/CREOL at the University of Central Florida in Orlando. Siders has more than 30 years of experience in optics, photonics, and high-intensity and high-energy density physics, and his published work has garnered more than 6,000 citations.